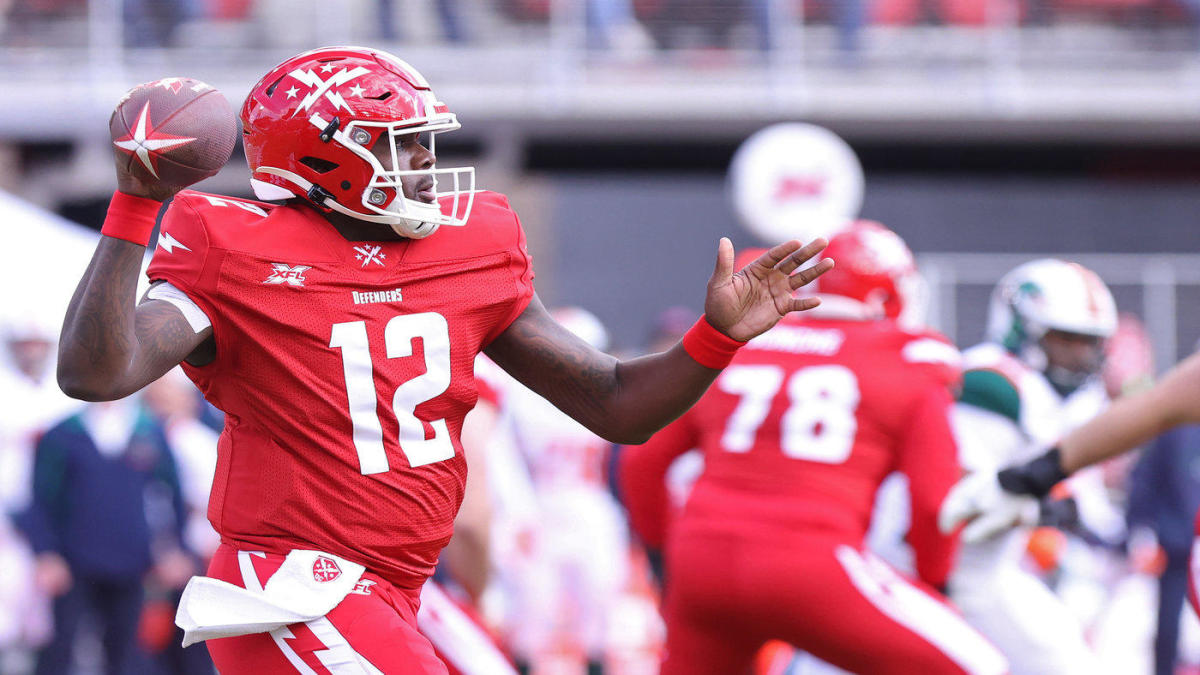 The NFL season is in the books, but the XFL season is just getting started, complete with eight all-new franchises kicking off their 2020 schedules on Saturday.

Revived after a nearly 20-year hiatus, Vince McMahon’s spring league features a number of familiar faces, including big names from both the NFL and college football — like former Oklahoma coach Bob Stoops, ex-Pittsburgh Steelers quarterback Landry Jones and former national champion Cardale Jones. It’s got a bunch of new rules, including ways for teams to add three points after a touchdown. And it’s officially underway, with four different matchups marking the start of a 10-week regular season — one that will ultimately lead to the new XFL’s inaugural championship in April.

Whether you’re fired up or just curious about the resurrected league, CBS Sports is the place to be. We’ve got you covered with a detailed XFL Viewer’s Guide, projected team win totals, weekly power rankings, game predictions, a breakdown of every single player in the league, plus a whole lot more. And if it’s the games themselves you’re interested in, you came to the right place.

Named the Roughnecks’ starting QB over former fourth-round NFL draft pick Connor Cook, Walker made an early case as the XFL’s most underrated arm Saturday, wasting no time dropping a bomb on the Los Angeles Wildcats. The former Temple and Indianapolis Colts signal-caller uncorked a 50-yard TD to ex-Virginia Tech WR Cam Phillips less than three minutes into Houston’s showdown with the Wildcats.

Former Princeton QB Chad Kanoff helped L.A. even up the score a few minutes later, but Walker’s deep ball set the tone for the second of Saturday’s openers.

The Dragons made for a very entertaining Saturday, especially when they relied on WR Austin Proehl offensively. The son of former Super Bowl champion Ricky Proehl, the young receiver led Seattle with five catches for 88 yards, but he was also responsible for a crucial TD catch down the sideline that kept the Dragons in contention in the second half.

Overall, though, DC ensured it would leave its home crowd happy by racking up the defensive plays en route to a 31-19 Week 1 victory. Former Philadelphia Eagles DT Elijah Qualls hopped on top of a fumbled exchange between Dragons QB Brandon Silvers and his RB after Seattle got extra downs following a DC penalty on a field goal. CB Bradley Sylve picked off Silvers and returned it the distance for a score. And fellow CB Elijah Campbell, an active presence in Saturday’s contest, nearly had another pick-six with just over a minute left in the game, helping seal DC’s victory by leading the Defenders to a fourth-and-15 stand.

The Dragons may have responded to it almost immediately with a touchdown of their own, but that doesn’t make DC’s third-quarter trick play any less impressive. Not only did the Defenders let Cardale Jones air it out deep for TE Khari Lee, but they did it after both RB Donnel Pumphrey and WR Eli Rogers got hands on the ball, pulling off a clean double-reverse flea flicker for the most creative play of the day.

Jones and the Defenders put themselves back on top later in the quarter when No. 12 unloaded a deep-ball TD to Rashad Ross, who was on the receiving end of another big-play pass earlier in the game.

First half of opener closes with a bang

Neither the Defenders nor the Dragons were lacking in entertaining plays to end the first half of XFL’s debut game in 2020. Despite playing conservative earlier in the second quarter, Seattle got bold once it entered DC territory in the final few minutes of first-half action, with coach Jim Zorn dialing up a deep pass on a fourth-and-8 and QB Brandon Silvers finding his check-down man for a new set of downs. Former Chargers RB Kenneth Farrow stayed hot shortly afterward, finishing the first two quarters with an average of almost 10 yards per carry, while former NFL reserve and fellow back Trey Williams capped the Dragons’ drive with a screen-pass TD — before declaring to ESPN’s Dianna Russini that “this is XFL football; this ain’t no slouch league.”

DC refused to go into the locker room without a big play of its own, however. Former Boise State K Ty Rausa redeemed himself after an earlier 35-yard field-goal miss, nailing a 55-yarder right down the middle to pull DC within one point going into the half.

Seattle opted to stick to the ground and play conservative in the second quarter of Saturday’s game, with coach Jim Zorn notably calling for a punt on a fourth-and-1 nearing DC territory, while the Defenders retook the lead thanks to highlight-reel plays from two of their top defensive backs. Former Denver Broncos safety Rahim Moore stepped right in front of a Brandon Silvers pass to log the XFL’s first interception.

And though Moore’s turnover didn’t lead to any points, an easily blocked punt by Northern Iowa product Elijah Campbell later in the quarter did help DC get on the board, setting up a near-instant fumble recovery in the end zone for the go-ahead score. A failed two-point try with Buffalo product Tyree Jackson filling in for Cardale Jones at quarterback kept the score within three points.

Two-score underdogs in the nation’s capital, the Seattle Dragons scored the first touchdown in the history of the revived XFL, taking a 6-3 lead on the DC Defenders late in the first quarter of Saturday’s league opener. The Defenders flashed first, with ex-Ohio State standout Cardale Jones leading the game’s first scoring drive after back-to-back hookups with receivers Eli Rogers and Rashad Ross.

But DC settled for a 34-yard field goal try, while Seattle got six on the board after their own quarterback stole the spotlight — former AAF prospect Brandon Silvers firing consecutive dimes, including a deep ball to Dontez Byrd and an over-the-middle TD to Austin Proehl, to put the Dragons ahead.

The first play of the 2020 XFL season showcased some of the league’s creativity. The opening kickoff, redesigned to decrease high-speed collisions, featured the kicker lining up all by himself and the rest of the two teams essentially waiting until the kick returner catches the ball to begin moving.