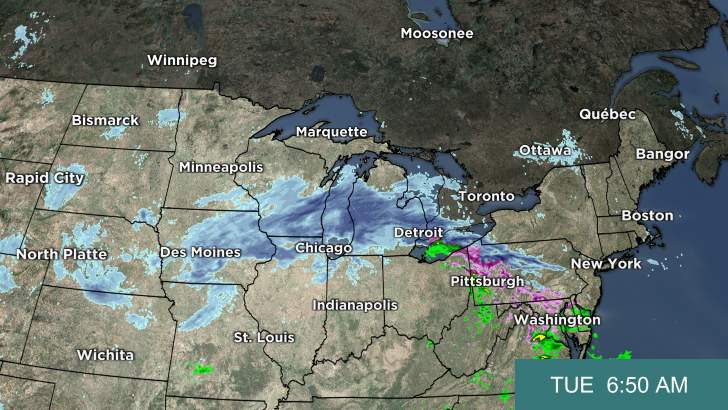 DETROIT – Snow has been moving into southeast Michigan since about 2 a.m. Tuesday, and we’ll have periods of snow during the day.

The most consistent snow will fall north of 8 Mile Road, with less additional snow during the day south of there. In fact, parts of Lenawee and Monroe counties could even see some freezing drizzle.

Generally speaking, it appears that most of Lenawee and Monroe counties will see less than an inch of snow, I-94 to M-59/Hall Road probably around two inches, and north of M-59 probably between three and four inches since you’ll receive the longest duration snow.

Like yesterday, I have put my forecast for specific snow amounts in your area in the 4ZONE forecast, which you can easily see for yourself on ClickOnDetroit.com and on our FREE Local4Casters weather app.

Temperatures today will only rise a couple of degrees, perhaps to near freezing (0 degrees Celsius), with a northeast wind becoming north at 10 to 15 mph.

Mostly cloudy on Wednesday, with highs in the upper 20s (-2 to -1 degree Celsius). Becoming partly cloudy and much colder Wednesday night, with lows in the low to mid teens (-11 degrees Celsius).

There are some changes offered by the computer models in terms of their handling of our next storm, and the biggest change is in slowing it down. I now think we’ll be dry on Saturday, with increasing afternoon clouds. Highs in the upper 20s (-2 to -1 degree Celsius).