Why Don’t Unpaid Federal Workers Walk Off the Job? 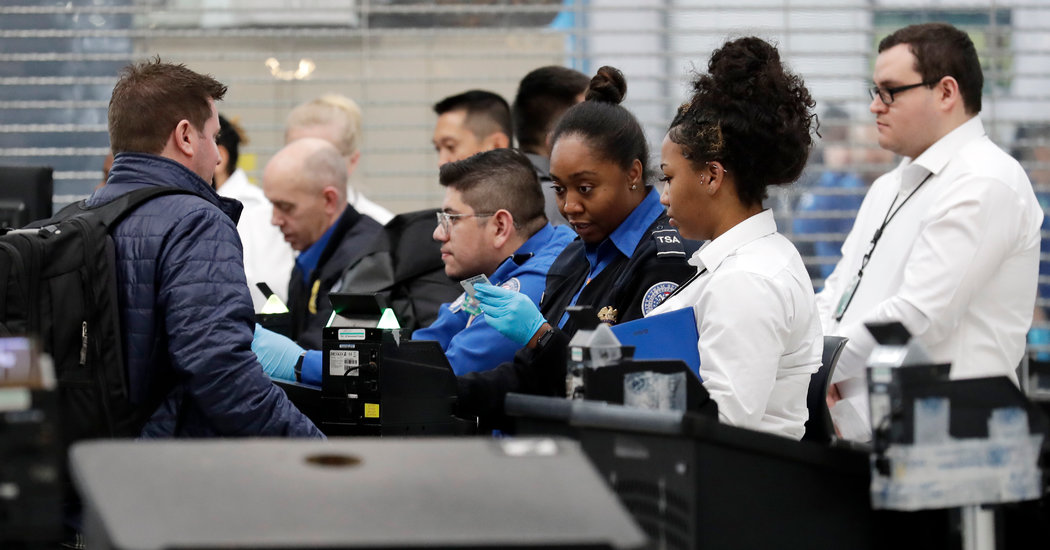 Why Don’t Unpaid Federal Workers Walk Off the Job?

Several hundred thousand federal workers keep showing up at their jobs every day — screening luggage for explosives, policing prisons, preparing to open tax filing season — even though they aren’t getting paid. You wouldn’t expect that at a private company or, say, in almost any European country. But they keep reporting for work, in the midst of what is now the longest federal shutdown in United States history.

Which raises the question: Why do they keep showing up?

Lawmakers are beginning to float the idea that perhaps they shouldn’t and that some sort of coordinated absence by federal workers might be the quickest way to persuade President Trump and congressional Democrats to find a deal to end the shutdown:

Workers understand the power they have; a walkout of Transportation Security Administration employees would effectively cripple air travel in the United States, for example.

But they do not appear close to wielding that leverage. On Wednesday, T.S.A. reported its national rate of unscheduled absences was 6.1 percent, up from 3.7 percent a year ago, but not high enough to significantly worsen wait times in most major airports.

Here are the reasons more federal workers are still showing up for work despite not getting paid.

The law prohibits them from striking

The National Labor Relations Act extends a right to strike to American workers — but it specifically does not give that right to government workers. A law passed during President Jimmy Carter’s administration bars federal workers from striking. When air traffic controllers walked off the job in 1981, demanding better pay and working conditions, President Ronald Reagan ordered them to return to work. When they did not, he fired them.

For an employee deemed “excepted” from furlough during a shutdown — which is to say, forced to work without pay — walking off the job could carry a similar penalty. Guidance from the federal Office of Personnel Management prohibits excepted employees from taking any sort of leave, including vacation or sick days, during a shutdown.

“If an excepted employee refuses to report for work after being ordered to do so,” the guidance says, “he or she will be considered to be absent without leave (AWOL) and will be subject to any consequences that may follow from being AWOL.”

Employees believe in their mission

Union leaders and federal workers frequently stress that furloughed employees want to be allowed to return to their jobs — and that employees working without pay are doing so largely because they care about their work, be it protecting public lands, inspecting food for safety or catching drug smugglers at the border.

“It sounds corny, I know,” said Jacqueline Simon, the director of public policy for the American Federation of Government Employees, the largest federal workers’ union. But “federal employees are extremely devoted to the mission of their agencies,” she said. “They don’t just fall into these jobs. They believe in public service; they believe in what they do. They’re not just going to walk away. There may come a point when some of them have to, to feed their families, but no one wants to do that.”

The National Air Traffic Controllers Association has seen “no unusual increase” in controllers missing work, the union’s executive vice president, Trish Gilbert, said on Friday. Asked if the controllers’ association would consider organizing a strike, a walkout or another job action if the shutdown continued in the long run, Ms. Gilbert said the union “would not condone or endorse any kind of activity like that.”

“We have taken an oath,” she said. “We know we’re important to the United States economy, and we are going to work. We’re just not getting paid. So even if this drags on, people will come to work.”

At least three lawsuits have been filed against the federal government by groups including the National Treasury Employees Union, which is acting on behalf of thousands of federal employees, including Border Patrol workers, air traffic control officials and Internal Revenue Service employees. At least one of those lawsuits points to a clause in the Constitution that says the government cannot promise to allocate funds — including backlogged pay to workers — that it does not currently have.

A United States District Court judge ruled on Tuesday against issuing any injunction that would send workers home or order them to be paid with money that does exist. But those cases will continue to work their way through the judiciary, with another court date set at the end of the month.

The average federal worker has lost about $5,000 since the shutdown took hold in late December. On Wednesday, the president was expected to sign a bill promising that those workers would receive retroactive pay.

The longer the shutdown goes, the more likely it is workers will seek another job

Loyalty does not make workers immune to economic reality; they still need to make mortgage and car payments. In the high-cost Washington area, Ms. Simon said, a T.S.A. employee’s salary starts at $28,000 a year, which “doesn’t give you any cushion for absorbing any interruption in your pay.”

Reporting the agency’s elevated rate of unscheduled leave on Wednesday, T.S.A. officials said that “many employees are reporting that they are not able to report to work due to financial limitations.”

Furloughed employees can work other jobs to make ends meet: A staff member with the White House Council of Economic Advisers has begun driving for Uber to pay the bills, the council’s director said this week. But moonlighting is a lot harder for excepted employees, who still must show up at their regular job every day.

With a strong labor market and an unemployment rate hovering around 4 percent, many of those employees might eventually quit to take a job that brings an immediate paycheck.

An analysis from the online jobs site Indeed suggests that might already be brewing. It looked at job search behavior from mid-December through mid-January for workers at some affected federal agencies, including the I.R.S. and the T.S.A.

Indeed researchers found that clicks on job listings rose at least 17 percent for each of those worker groups over that period, a sign that employees affected by the shutdown “are searching for jobs more right now than they usually do at this time of year,” said Martha Gimbel, Indeed’s director of economic research.

Ms. Simon said that some workers might eventually be forced to take other jobs if the shutdown stretches on. For now, she said, there is no talk about a coordinated “sickout” or other walkout from work. Federal employees, she said, are “sharing their heartache” with one another — and their indignation.

“They don’t like being treated as hostages,” she said.