Why do so many Americans refuse to wear face masks? Politics is part of it — but only part 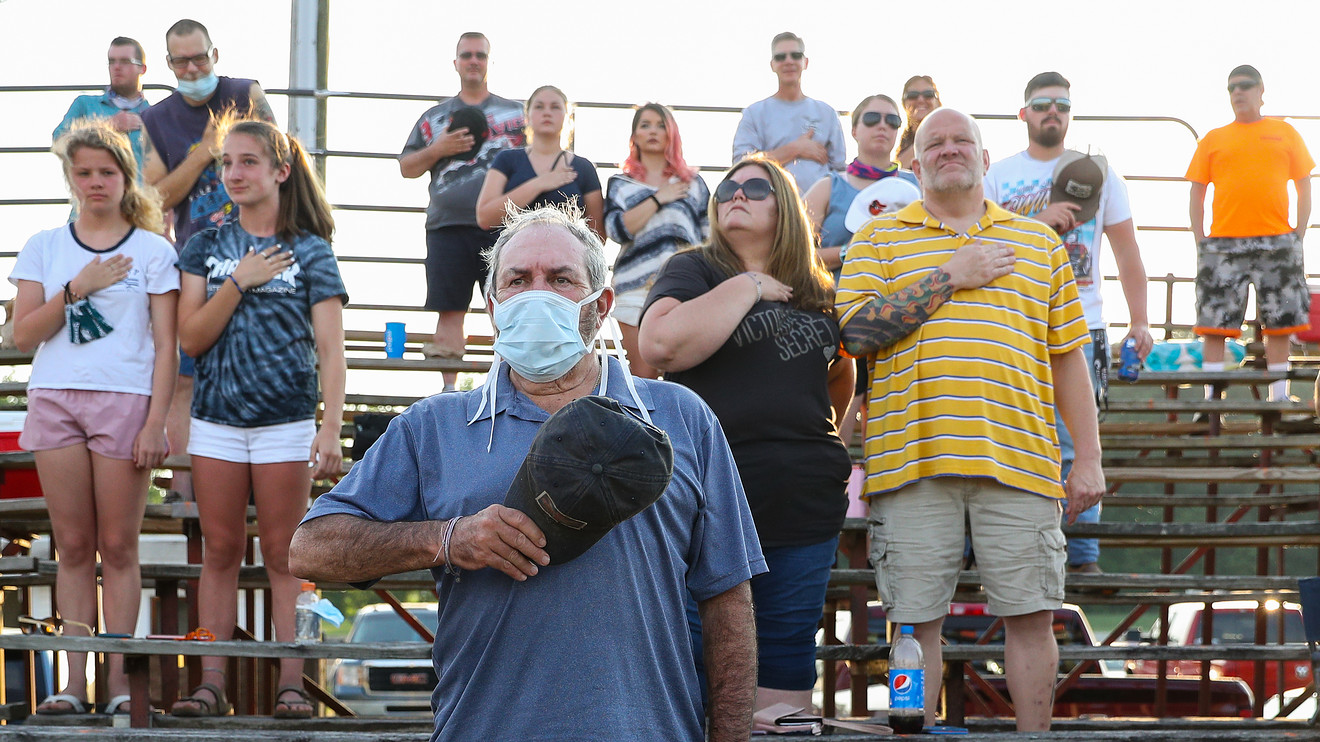 Why do so many Americans refuse to wear face masks? Politics is part of it — but only part

When Delaware International Speedway, a raceway in Delmar, Del., reopened to spectators earlier this month, attendees were forewarned that they had to wear face masks.

“As a part of the agreement for opening with the State of Delaware those social distancing measures are still in place as well as, masks must be worn by all spectators,” according to the stadium’s official policy.

“
Those who choose not to wear masks, may feel a sense of solidarity, like they’re taking a stand against authority.
”

However, pictures from the first race held on June 6 showed that many spectators did not abide by the face-mask requirement.

Delaware International Speedway did not respond to MarketWatch’s request for a comment.

In early April, the U.S. Centers for Disease Control and Prevention recommended that Americans wear a face cloth covering or mask in places where it is difficult to social distance from other people. However, there currently is no federal mandate to wear face coverings. Nor is the wearing of eye protection a formal recommendation, though a study published in the Lancet found an association with reduced infection.

Related: ‘I woke up in a free country’: Costco shopper gets bounced from store after refusing to wear a mask

But even in states with mask mandates, Americans are defying these orders despite evidence that suggests that widespread use of face masks can greatly limit the transmission of the coronavirus, which is believed to occur mainly from respiratory droplets.

On Sunday, U.S. Surgeon General Jerome Adams tweeted: “Some feel face coverings infringe on their freedom of choice — but if more wear them, we’ll have MORE freedom to go out.”

“
In times of heightened uncertainty, humans tend to seek a sense of belonging. That cuts both ways.
”

“Ultimately it is a choice we make, and I hope it’s made based on the best available/current science, and a desire to do all we can to help others and ourselves/our communities,” he said in a subsequent tweet. “Like vaccines, the more who participate, the greater the impact.”

It may go beyond politics. In times of heightened uncertainty, humans tend to seek a sense of belonging, said David Abrams, a professor of social and behavioral sciences at the NYU School of Global Public Health. That cuts both ways. Those who don’t wear masks may feel a sense of solidarity, and those that do likely regard it “as an act of altruism and a way of helping each other out,” said Abrams.

People who have lost a loved one to the coronavirus are also more likely to wear masks, he said. “Thinking about real people and personalizing coronavirus gets at that emotion of altruism and nurturance. You side with the tribe that wears masks and you go, ‘Oh I want to be part of that.’ ”

If common sense prevailed, all Americans would wear face masks, Abrams told MarketWatch. But in light of heightened uncertainty, “strong emotions override rationality, and we look to leaders for guidance.”

“
‘There’s a certain bravado of being angry and defying requirements to wear a mask.’
”

Notably, President Donald Trump and Vice President Mike Pence have been reluctant to wear — and have refused to wear — masks in public, and in Trump’s case to bristle at the sight of people wearing face coverings, or even in some instances to practice social distancing in his presence.

Pence violated the standards of the famed the Mayo Clinic in Minnesota and did not wear one during an April visit when he met with staff and patients. (A week after Pence’s visit he acknowledged he’d made a mistake by visiting patients without a mask, wearing a mask in his next public appearance, before returning to following Trump’s example.)

Pence and Trump both appeared to blame testing in the U.S. for a recent rise in COVID-19 cases. Pence, on a Monday call with governors, actively encouraged the echoing of a Trump administration stance that the increase in cases is due to an increase in testing. “The administration’s argument that less testing means fewer COVID-19 cases exist is absurd,” countered Kyle Herrig, president of the nonpartisan advocacy group Accountable.US.

Unlike many countries in East Asia, before coronavirus Americans rarely were asked to wear a face mask in public. Now Americans who don’t wear masks can be denied entry to stores including Costco
COST,
,
Dollar Tree
DLTR,

AAPL,
,
and can be barred from flying on United Airlines
UAL,
.

Americans who choose not to wear masks, Abrams said he suspects, “don’t want to admit that this is the new normal,” he said. “They want the old America that they’re used to.”

It may be a reaction (or overreaction) to authority. “There’s a certain bravado of being angry and defying requirements to wear a mask,” he said.

On the other hand, Americans are rarely up in arms when they see signs that require them to wear shoes or shirts because abiding by those standards is part of our culture, he added.

Don’t miss: ‘People probably aren’t going to react kindly or openly to being policed’: How to deal with someone who refuses wear a face mask

Demographic disparities when it comes to wearing a face mask

Gender, political affiliation, race, income and geography all appear to play a role when it comes to wearing a mask or not — some determining factors:

“Nationwide, higher percentages of respondents from urban areas reported use of cloth face coverings than did rural area respondents,” the report states. “Because outbreaks have been reported in rural communities and among certain populations since March 2020 these data suggest a need for additional and culturally effective messaging around the benefits of cloth face coverings targeting these areas.”

In the second week of April, a week after the CDC recommended all Americans wear face coverings in public, the divide between Democrats and Republicans who said they wear masks at all times when leaving home was fairly narrow, according to an Ipsos/Axios poll.

“
‘Trump had not made a point of not wearing a mask. Once he very clearly did not wear mask in public that transmitted a signal.’
”

That is the largest difference in mask wearing across all demographics, including household income, age, race and gender, said pollster Chris Jackson, senior vice president for Ipsos Public Affairs.

In early April, “Trump had not made a point of not wearing a mask,” Jackson said. “Once he very clearly did not wear mask in public, that transmitted a signal that if you’re a good supporter of the president you don’t wear a mask.”