Where to Score with El Nino Lurking 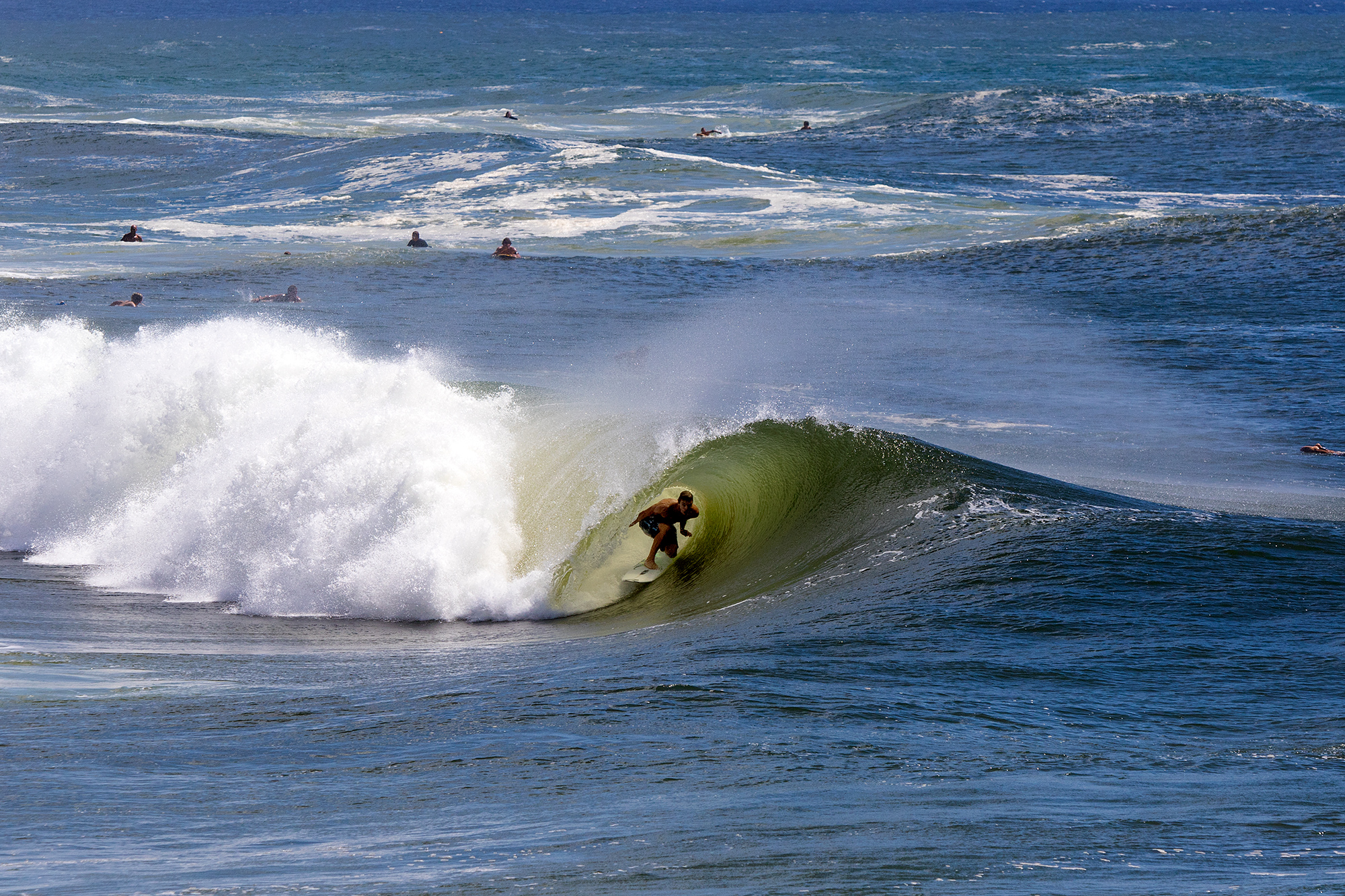 Where to Score with El Nino Lurking

Scarce surf at home? Travel to these three spots this month

March screams out for a surf trip. We’ve been conditioned through our lives that this is the time of year to get away for our own self-serving needs — remember Spring Break? You don’t need to be enrolled as a student to be granted a pass to escape the lingering cold at home. And following the dismal domestic surf in February, it’s the threat of more below-average conditions that are pushing you to hit the road. 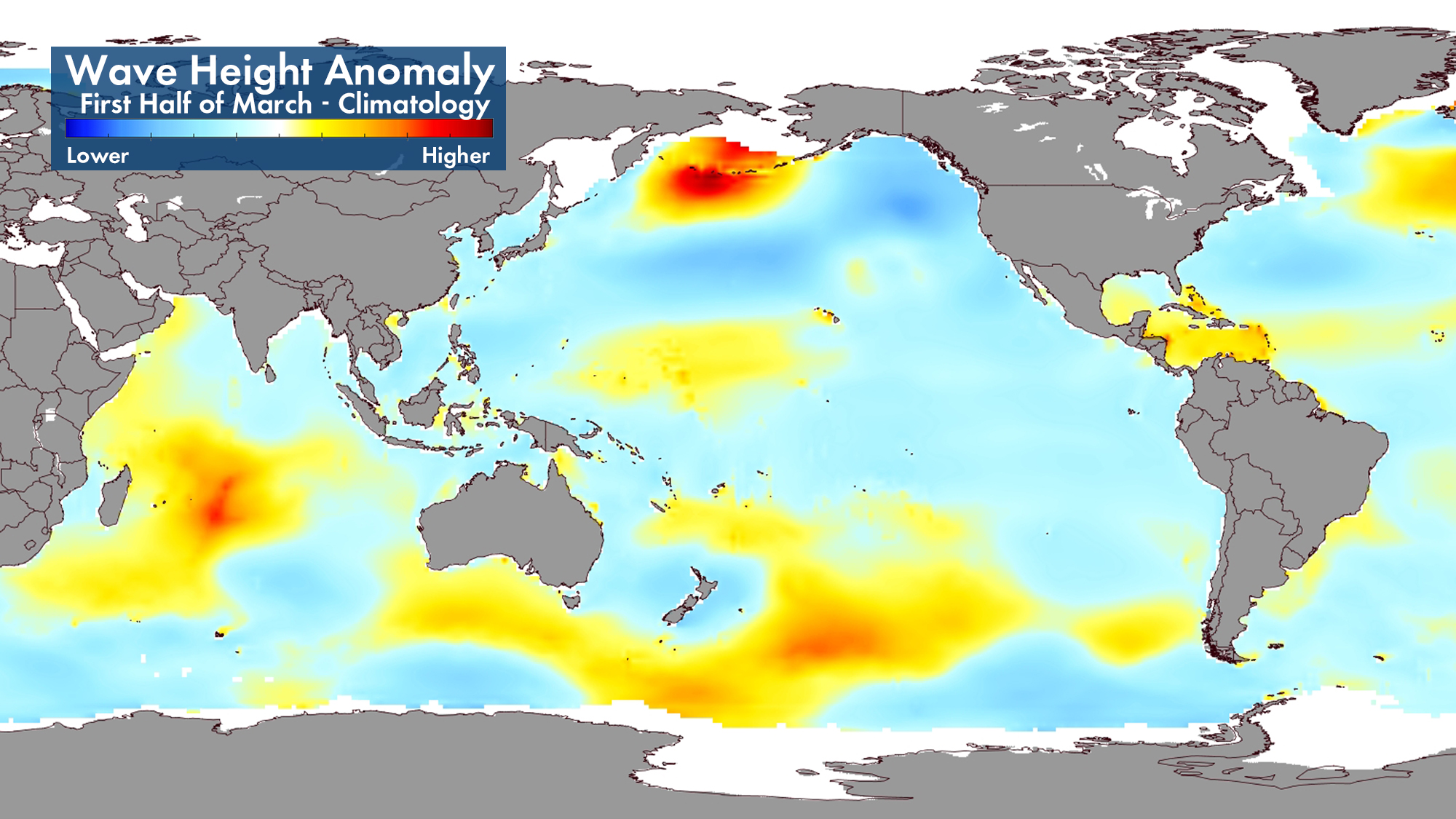 Above: Wave height anomaly map shows where LOLA thinks the above-average activity (red) will be for the first half of March. | Top Photo: Billy Watts

The start of spring in the Northern Hemisphere is often a plentiful period for surf around the globe — the North Pacific and North Atlantic still have some fight left in them and the Southern Hemisphere oceans can easily match or top the North’s production as it gears up for its busy season. And with weak El Nino conditions now officially in play, the swells look bountiful, right?

Not exactly. Weak El Nino conditions provide no guarantee of enhanced storm activity like they do during stronger events. Plus, most areas of the U.S. are projected to continue their lackluster performance into March rather than rising to the season. Our forecaster’s scoured the globe and came up with these three options for you in March, including the one bright spot at home. Pick your destination and start planning your trip now or you just might be stuck suffering through another bleak month.

For the U.S. based surfer not wanting to use a passport for their spring surf trip, Northern California looks like a good bet in March if you can be a little flexible in the type of water — and equipment — you’ll ride.

For the wet water junky, March should see improved surf from February, although still likely smaller and lower quality than the stretch we saw starting later in November that lasted through a decent chunk of January. During that part of the season, we saw a more wide open North Pacific Ocean with larger, long period swell development. Meanwhile, high pressure made frequent stops over the Western U.S. with periods of favorable wind. 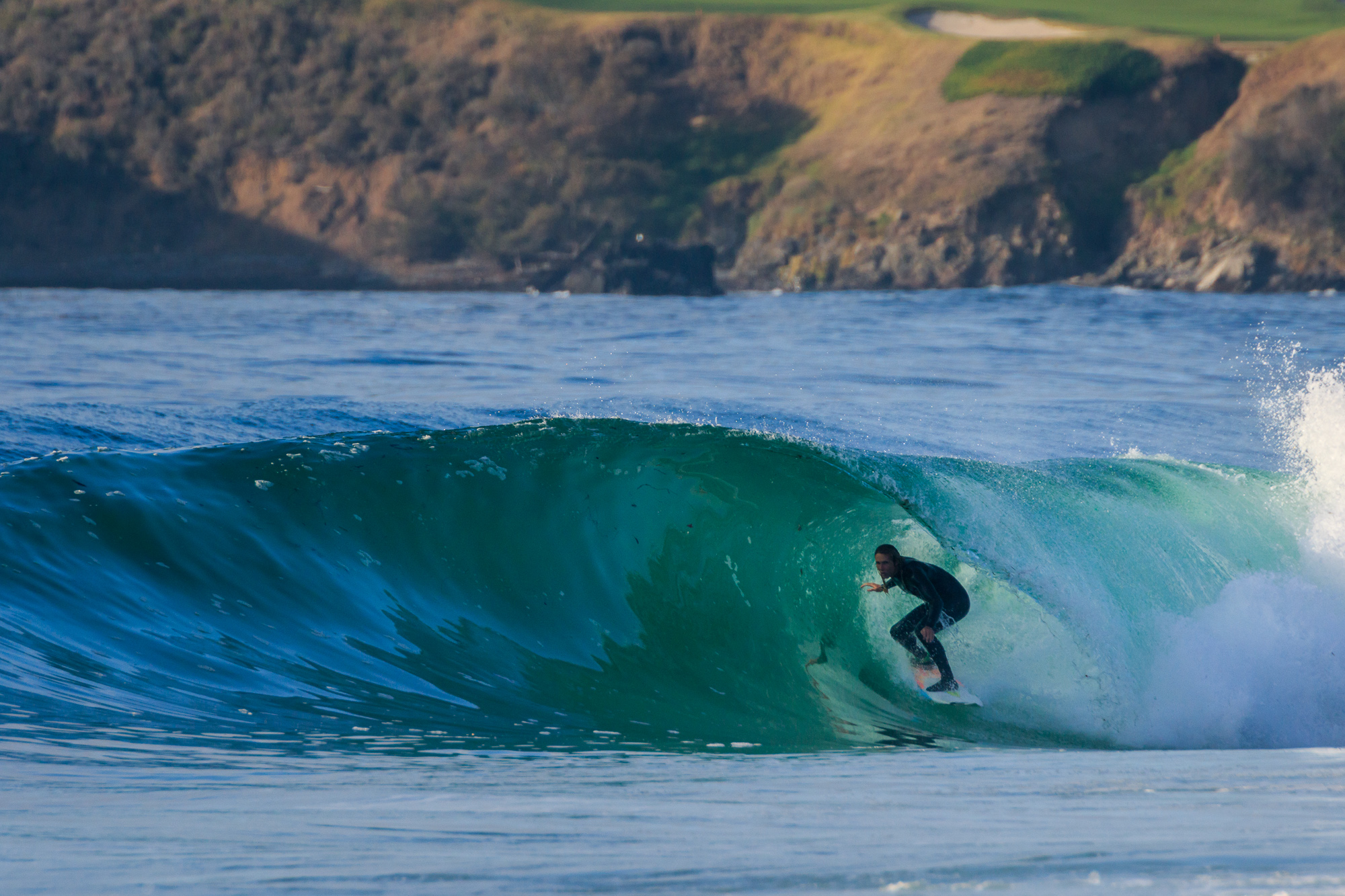 There’s more to NorCal than Mav’s, Ocean Beach, and the Lane. Photo: Klein

We’ll likely see more of a mixed bag of surf and conditions over the next few weeks: long distance, long period swells will develop from cyclones on the other side of the dateline, while lows swooping southward out of the Alaskan Gulf will produce shorter period shots of swell and unsettled weather.

March roars in like a lion, as the first day of the month sees a solid, peaking WNW/NW swell mix put lots of NorCal spots in overhead to double overhead surf. Favorable winds for mainly clean conditions are due then, too. Waves wind down while winds pick up over the month’s lead off weekend. A more modest scale combo of swells is scheduled through the first full week of March, along with persistent bouts of prevailing onshores. By the following week, another run of healthy, long period NW/WNW is expected to roll in, coinciding with potentially lighter winds/cleaner conditions.

Further out, Surfline’s long range wave height charts keep the North Pacific colorful, which means there could be more substantial storms spinning over the ocean through the middle of the month. Under that scenario, Northern California could see larger surf heading into the second half of March, for a seamless seasonal transition from winter waves to spring surf. 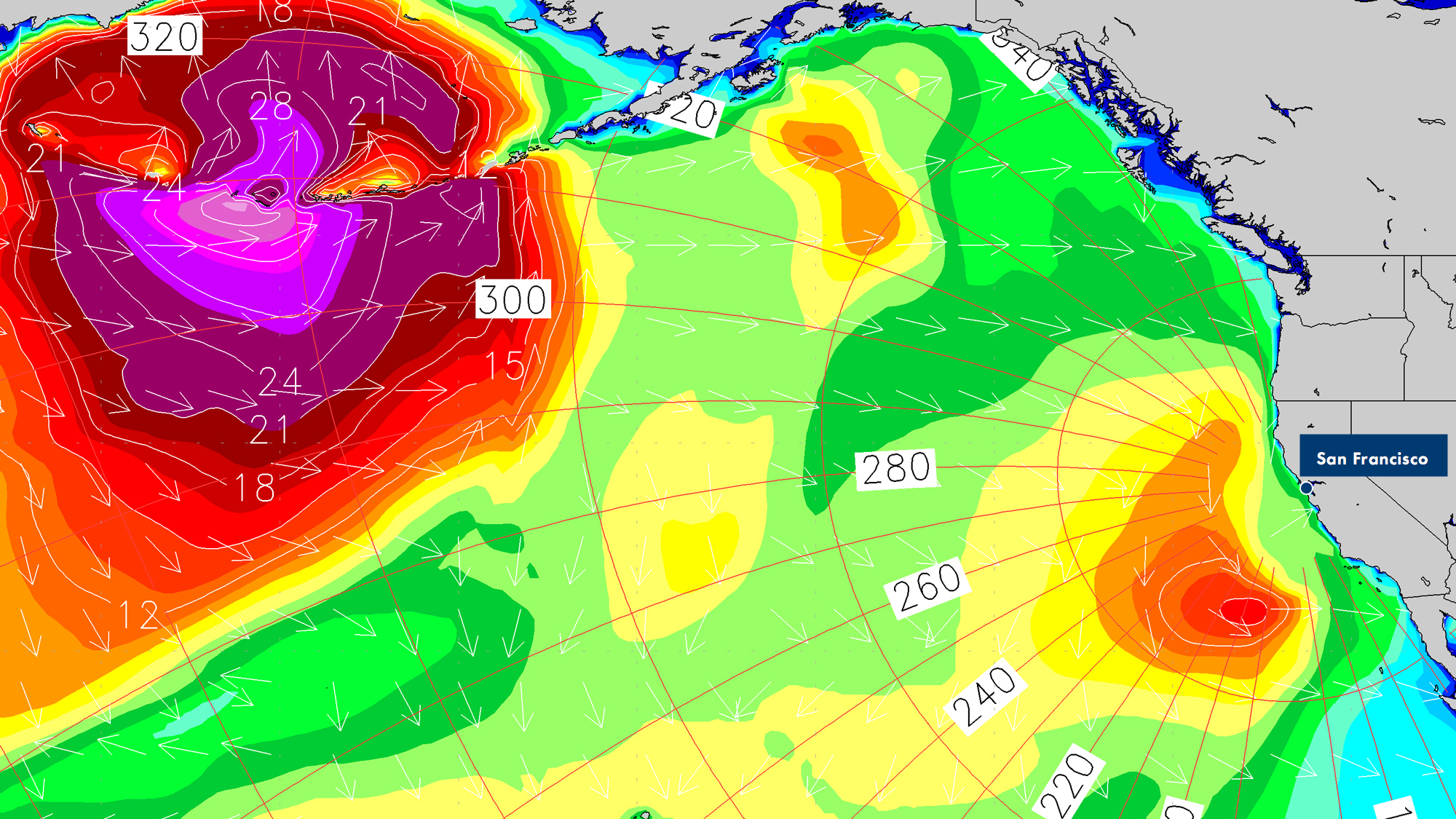 LOLA extended range outlook for the first week of March shows the expected options this month — long distance, long period swell and shorter period surf and weather (including snow) from nearby systems.

Here’s where the curveball — and an open mind — comes into play. The pattern in place during February dumped copious amounts of snow in the mountains of Central and Northern California, especially the Sierra Nevada. If the wet water is uninviting, the inland frozen variety is waiting for you. In fact, select areas experienced their snowiest month on record with over 25 feet of snow in February.

The early part of March is likely to see continued periods of unsettled, rainy/snowy weather with plenty more snow expected in the local mountains as the Climate Prediction Center shows a strong chance for above average precipitation during the first ten to 14 days of the month. Staying close to home and finding the mix of occasional fun to good surf days and deep powder days should keep the stoke alive and well this month. 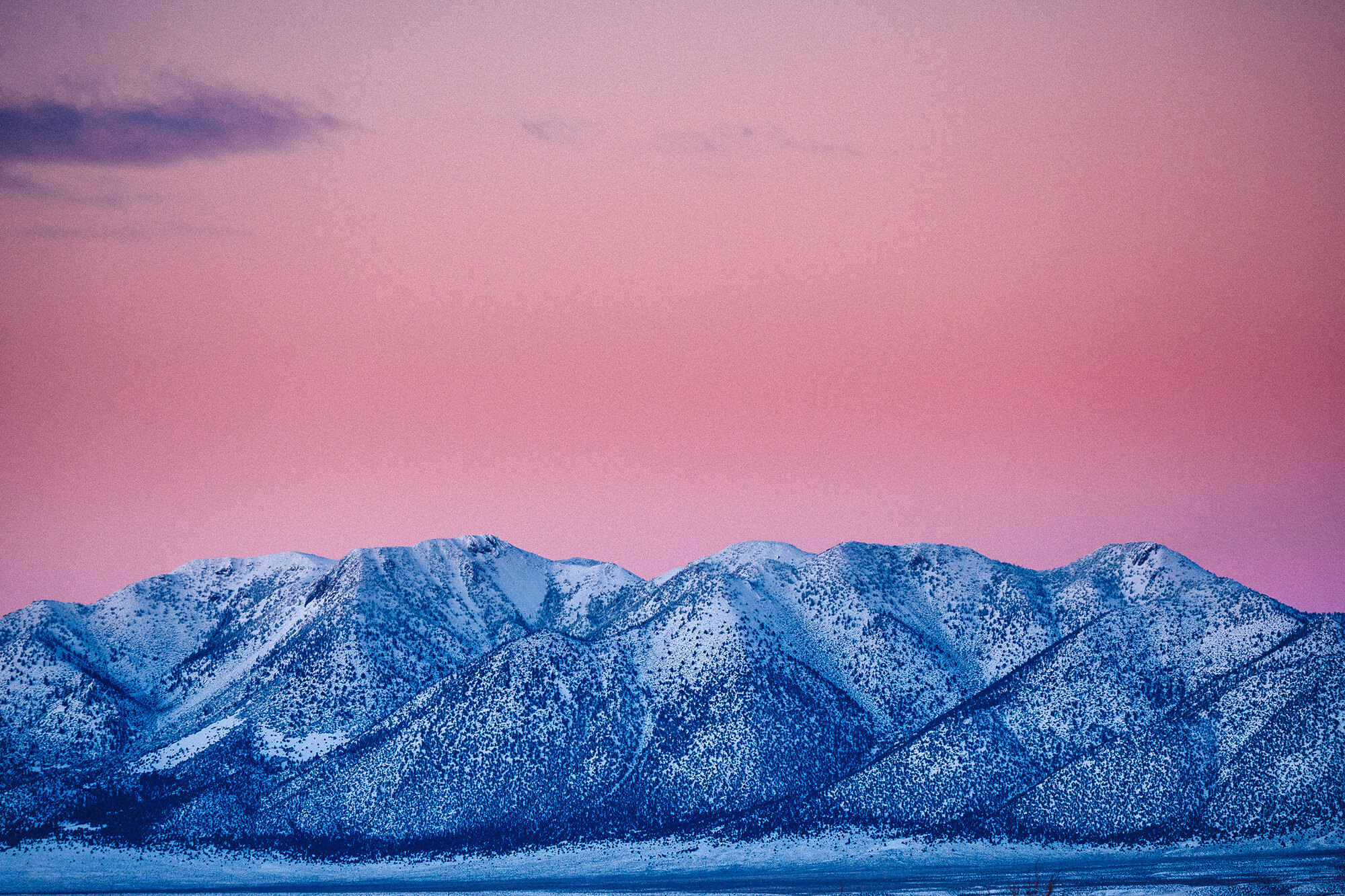 It’s water but in a different state with less salt. Take the fins off a tow board and you’re set. Photo: Klein

After one of the best swell runs in recent memory, courtesy of Cyclone Oma, the East Coast of Australia — specifically southern Queensland — likely sees fun to good surf continue for the first week of March. This won’t be at nearly the size or intensity of the Oma sessions, but head high to slightly overhead, shorter to mid-period E swell is expected for much of the next week thanks to strong high pressure in the Tasman Sea. 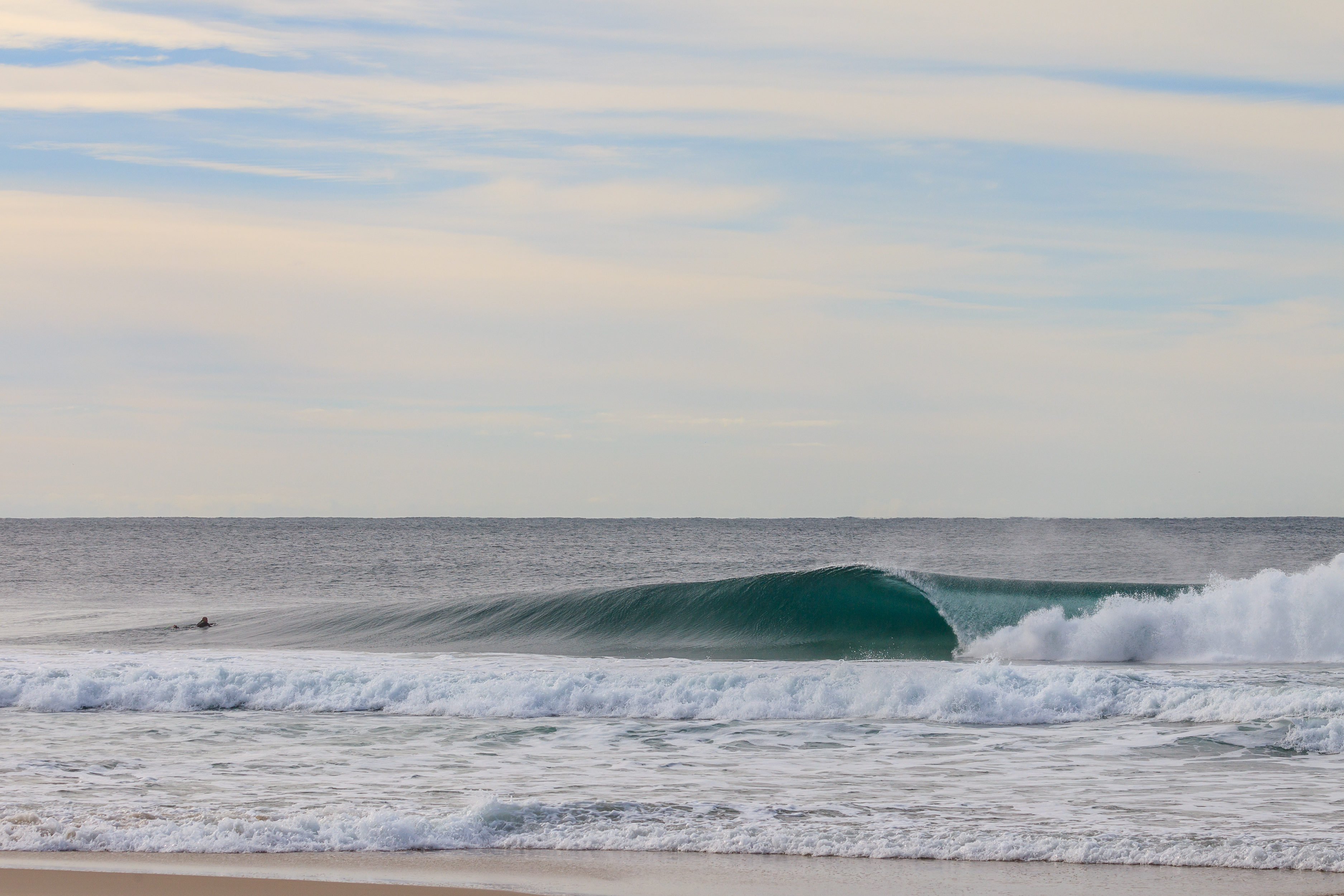 The Gold Coast isn’t all Superbank and super crowded — don’t let it scare you away from this. Photo: Klein

We’re also monitoring Tropical Cyclone Pola during the next several days as it interacts with the high in the Tasman Sea. Pola’s track away from the Gold Coast should dampen its direct swell contribution some but look for slightly longer period swell to join the shorter to mid-period energy through the first few days of March. 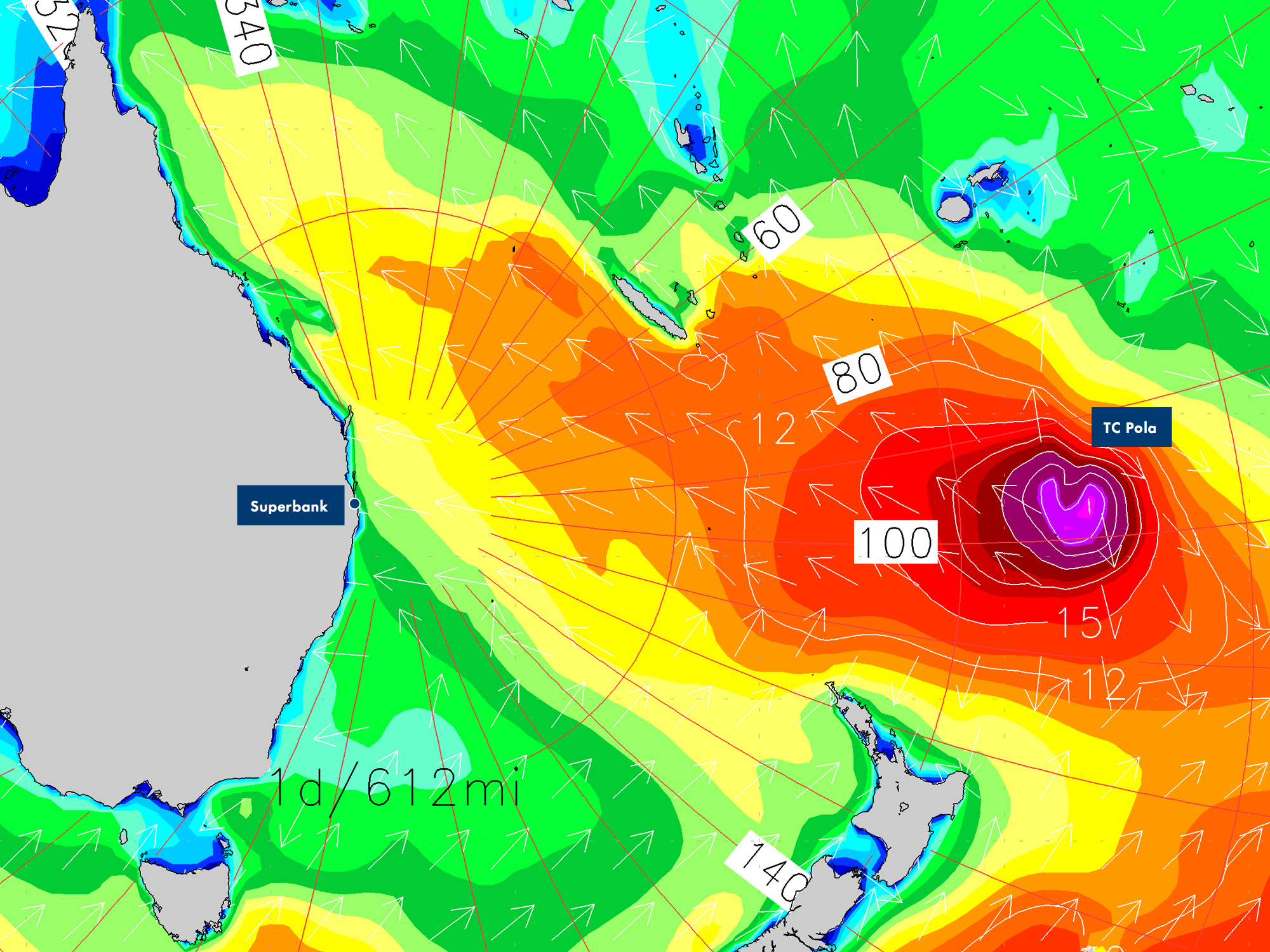 A good start to the month on the Gold Coast with trade and tropical cyclone swell … and more to come?

Wind is breezy from the ESE to SE for the Gold Coast during early days of the month, so the protected points will likely be the call before wind and swell potentially ease around a week or so into the month (with a few of the beachbreaks and other areas opening up a bit more).

Tropical Cyclone Oma swell at Kirra — will we see more of this in March?

Starting around the second full week of March, and potentially extending into the second half of the month, we may see SE/ESE tradeswell become reenergized as high pressure fills back into the Tasman Sea. A couple of our more trusted models also hint at more tropical activity around mid-month, which, when combined with high pressure returning to the Tasman Sea, would lead to enhanced surf at that time.

For a mix of good waves, rich history, and delicious cuisine, head across the Atlantic Ocean to Portugal this month. If you can snag a nonstop flight, it’s less than seven hours to Lisbon from the Northeast U.S. — that’s shorter than a trip to Hawaii from there, and only an hour or two longer than a jump to the West Coast or Central America. 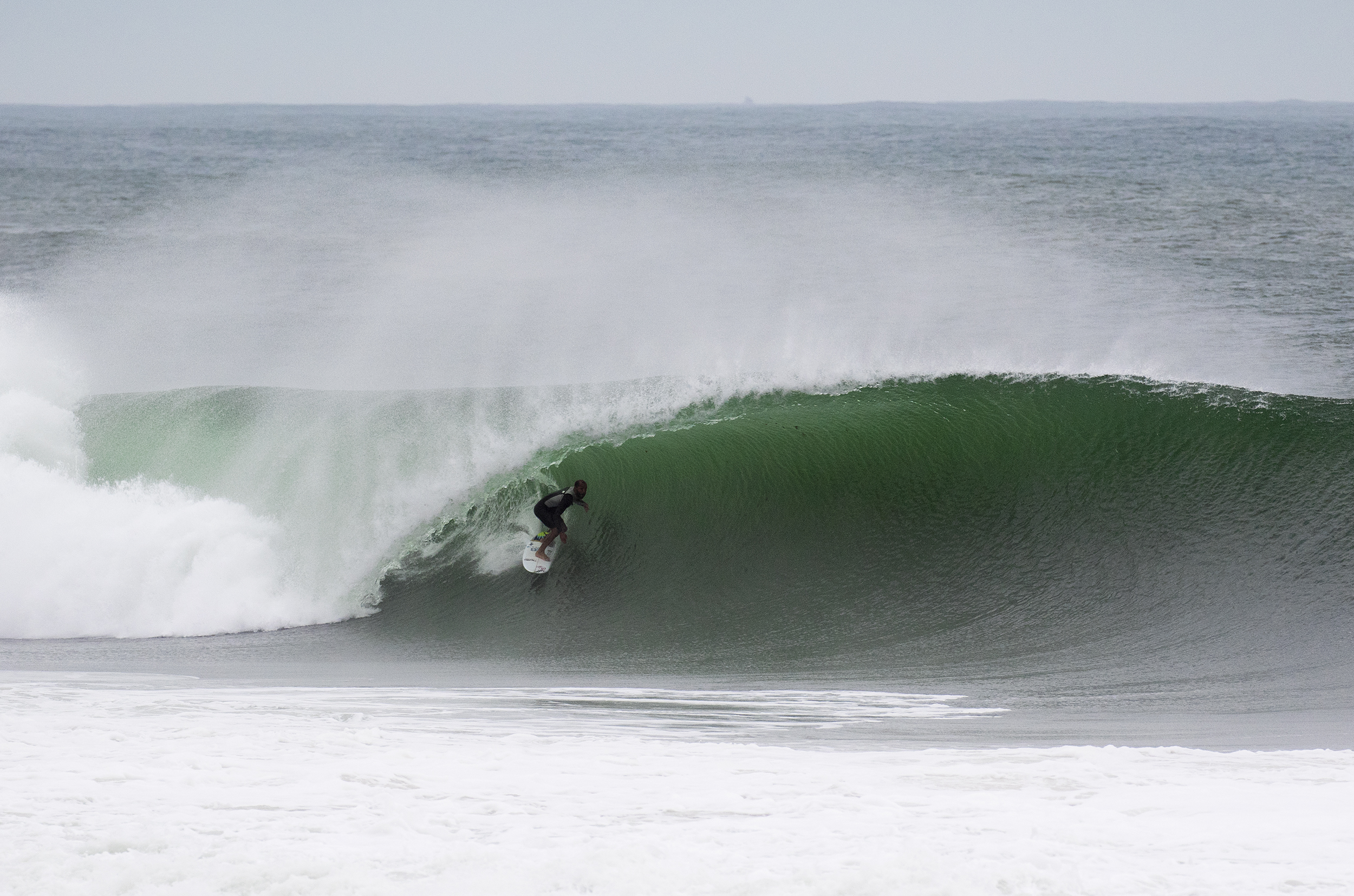 With the cragged coast of Portugal, there’s almost always an option to find good wind or to hide from too much swell. Jadson Andre Photo: Watts

The Portuguese coastline offers surf breaks that face a variety of directions, which means there are a ton of options depending on the swell and wind. Portugal is so large and with surf a variety of surf zones, we break the country down into six distinct subregions for forecasting purposes. Sure, there are famous big wave spots like Nazaré, but other spots like Supertubos and Carcavelos can get good for the more-average-than-XL-charger surfer. Portugal is typically far enough south to avoid the direct weather impacts of the North Atlantic storms but the coast is still open to benefit from these storm’s swell output.

An active North Atlantic storm track for the first couple weeks of March produces plenty of solid to large surf for Portugal. Climate signals suggest the main storm activity in the Atlantic will be focused on the higher latitudes, and we’re seeing indications of above average wave heights over the Northeast Atlantic through mid-month. 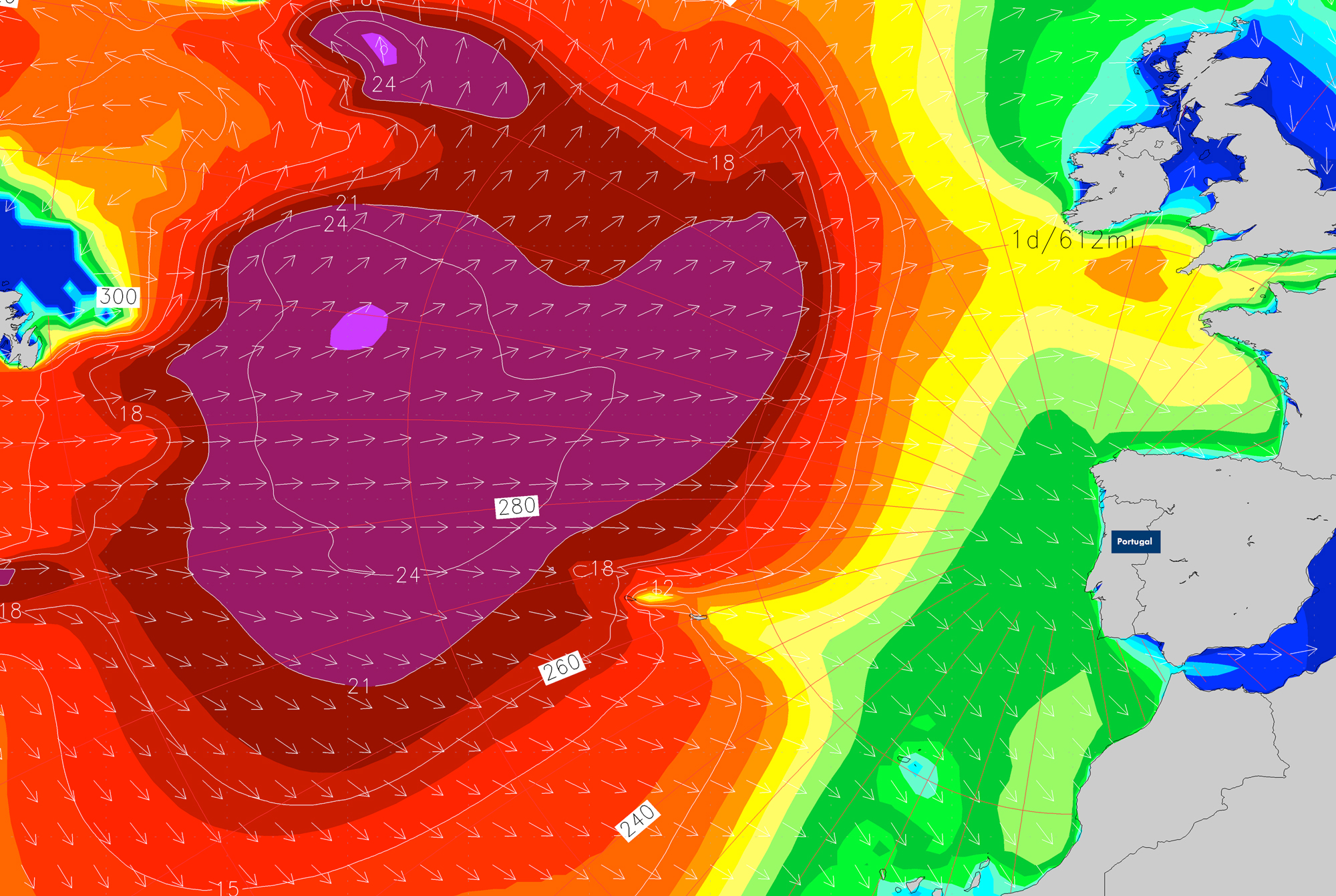 No lack of surf to kick off March.

Solid W/WNW swell for Portugal starts off the new month, and this rapidly rises for the first weekend, peaking on the 4th and gradually easing through the first full week of the month. Conditions will vary through the first five to seven days of the month, allowing you to sample a variety of breaks with more than enough swell running to turn most spots on — standout, well-exposed spots see large surf in the 3-4x overhead range.

The surf remains strong but is expected to gradually ease heading into the second week of March before a new, solid pulse of NW swell fills in around the 10th-12th. It looks like we’ll see strong but more manageable swell through the middle of the month, good news for the intermediate, traveling surfer.

Our proprietary forecasting models and team of meteorologists provide detailed forecasts for thousands of breaks around the globe. Go Premium and we’ll help you know before you go.