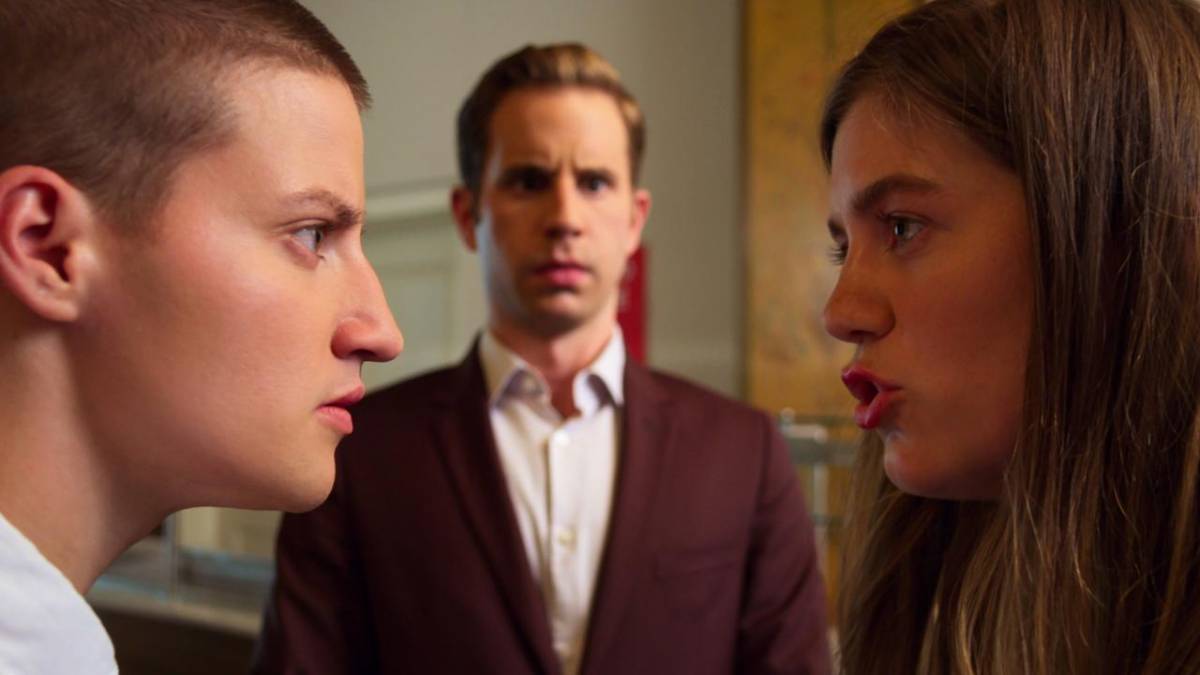 Welcome to What’s the Buzz, 25YL’s feature where members of our staff provide you with recommendations on a weekly basis. In our internet age, there is so much out there to think about watching, reading, listening to, etc., that it can be hard to separate the wheat from the chaff, filter out the noise, or find those diamonds in the rough. But have no fear! We’re here to help you do that thing I just described with three different metaphors. Each week a rotating cast of writers will offer their recommendations based on things they have discovered. They won’t always be new to the world, but they’ll be new to us, or we hope new to you. This week’s entries come from: Hawk Ripjaw, John Bernardy, and Caemeron Crain.

Hawk: After waiting for over a year in anticipation of its release, I was pleased to finally be able to pick up Untitled Goose Game on the Nintendo Switch. The charming stealth game has a simple premise: you’re a goose, and this goose is a real asshole.

The entire conceit of Untitled Goose Game is to, as said goose, wreak havoc on a small, peaceful town through a series of escalating pranks. Each area presents a list of tasks. In this early part of the game, these tasks consist of such things as stealing a farmer’s keys and locking him out of his own garden, building a picnic by the lake from various stolen food items, and taking a child’s glasses and tricking him into wearing a different pair.

Of course, all of these things are carried out by a goose, which amplifies the comedy considerably. The design and animation of the goose is simple and adorable: he moves with a goofy waddle, and has the immediate appearance of minding his own goosy business. Yet it soon becomes apparent that these small environments are merely a playground for the goose to inflict endless pain, embarrassment and frustration on the humans around him. At this point, the goose’s tendency to stand completely still and look directly at the nearest human with those terrifying, lifeless beady eyes makes him significantly more villainous.

The controls are simple, with buttons mapped to moving, grabbing items, crouching, honking, and wing flapping. The honk is one of the most amusing elements of the game, as it often startles the target and feeds into certain puzzle-oriented tasks, such as timing it correctly to make the farmer accidentally hammer his finger while placing a sign. This causes him to stagger backwards through a gate, opening up the next area. The movement controls could be a bit tighter, and make escaping from humans who’ve discovered an item is missing a little trickier than it should be.

The art presentation and sound design, however, are top notch. The world has a look that evokes artwork in your grandmother’s house (in a good way), and the soundtrack is a simple piano-centric soundscape that pops off a bit more in time with reactions to the goose. Once the goose is noticed pilfering something, a human will give chase and the music gets faster paced, slowing back down as soon as the item is recovered by the human. It’s a fun way to drive the thrill of annoying a small village.

It’s an easy game to pick up and mess around with for a bit, with the only apparent downside  being that it’s a bit on the short side. New tasks are added in areas when found, but if you know what you’re doing some of these puzzles can be solved very quickly, with some replay value found in continuously making messes and seeing how the townspeople try to recover them and/or retaliate. I’m looking forward to spending more time with this over the weekend.

John: The RoboSkull Podcast usual recaps Robotech episodes or the new comics book series from Titan Comics, but this week hosts Nick and Shamus put out two episodes of interviews: one with outgoing comic writer Simon Furman, and one with incoming writer Brenden Fletcher.

In Episode 60, Simon Furman talked about getting the Robotech gig after the original writer was ready to leave, and then what preparation he went through before writing. He talked how instead of having a giant plan from the beginning (it was after his second arc when he began planning toward the end of his arc), he let the characters take him places. He told the hosts what his writing process was like, how it was working with Tommy Yune, and that any references to Gloval’s pipe are due to the RoboSkull Podcast’s running joke with it.

Furman talked about naming Percy Satori, bringing in Karl Riber as a regular cast member, and how Event Horizon began because he wanted to do a time-looping story. Bringing in references to things like Robotech 3000 was all Furman’s idea, and he most enjoyed what they did with Roy’s character and writing all the great female characters.

In the interview with Brendan Fletcher, he talked about how he was a fan since he saw clips from Robotech in a cartoon previews special on TV back in 1985. Then we get a history lesson in Robotech fandom through Fletcher’s personal experience. Hearing about Protoculture Addicts magazine, the Jack McKinney novels, and the Palladium role playing game books brought back so many fond memories.

I never knew most people didn’t like Dana Sterling, so I’m glad to see her being one of Fletcher’s focal point characters in his upcoming Robotech Remix series. It sounds fantastic; it takes place 10 years after Furman’s arc ended and we’ll learn over time what happened in the years between.
We also learned how Fletcher’s 2-page backup stories—Curtain Call—came about in Furman’s Event Horizon storyline and that Fletcher’s mission statement for them became “I am going to fix Minmei.”

We learned Remix will have a plotline based around Dana, Marie Crystal and Nova Satori which intrigues me a ton because the Second Gen never gets enough focus. We also learn that Third Gen’s Lancer is in the mix somehow, as are—Sentinels fans get ready to smile—Jack Baker and Karen Penn.

Both Furman and Fletcher talked about their other upcoming work, and the hosts closed each episode with reactions to the interviews, but both episodes did a great job making me want to read what had come before and what’s coming over the next few years.

It’s definitely a great time to be a Robotech fan. If you’ve strayed from the franchise, I highly recommend listening to RoboSkull and looking into the book from Titan.

Caemeron: Ryan Murphy’s new show, The Politician, debuted in Netflix last week. The trailer reminded me a bit of Alexander Payne’s wonderful Election, so I decided to check it out pretty much right away.

I felt inspired enough after watching the first episode to pause and write something about it. That should tell you something right there. After having finished the season, however, I’m not sure if some of the thematic elements I identified in that piece were carried through as well as they could have been.

If you search the internet, you can find numerous reviews of this show, and a lot of them are negative, or at least somewhat so. Some complain about the age of the actors who are supposed to be playing high school students, but I don’t think that’s much of a criticism. It seems to me that audiences have been expected to engage in that kind of suspension of disbelief for ages, and so it didn’t really bother me at all.

The criticism that cuts deeper is that the show is inconsistent in its tone. At times it is light-hearted and flippant, while at others it gets to be downright earnest. I think this is due to the nature of what the show is up to, however, and so the criticism, though to some degree valid, should be taken with a grain of salt.

That is, The Politician is both a show that works by mocking the privilege of the rich youths running for high school president and a show that asks us to empathize with their struggles to figure out who they are and where they are going in the bewildering world we live in.

The show isn’t about politics in the sense of Democrats versus Republicans (although it might go more in that direction in the future). And the idea of mapping out a plan to become President of the United States based on the lives of Presidents past seems a bit absurd when we’re living in the age of Trump. But this too I think is part of the point.

At the end of the day The Politician is an imperfect, but entertaining show. It includes some very funny moments, and some heart-wrenching ones. And I think there is depth here when one realizes that rooting for one candidate of the other is not what one should be doing as a viewer. But neither is dismissing how seriously they are taking the election completely.

It is silly how Payton (Ben Platt) and his team in particular treat the election almost as a matter of life or death. An episode late in the season (“The Voter”) plays with this brilliantly, as it shifts focus to a previously unknown student at the school who doesn’t care about the election and basically just wants to be left alone.

At the same time, however, the campaign is but an entry point into how these young people conceive of themselves and the particular difficulty of defining oneself in the times in which we are living. The virtual self on social media, or immortalized in an unfortunate video, can seem to have more reality than who are offline.

Payton himself faces questions as to whether he is a good person, or is even capable of truly caring about others. And the viewer is faced with a similar question as to whether they like him or are on his side. It’s this nuance that makes me recommend The Politician to you, but you could probably watch it in other ways and still enjoy it.

The show is at turns at turns hilarious and poignant. Also, there are songs! Check it out on Netflix when you get a chance.

Those are our recommendations this week. What would be yours? Let us know in the comments!