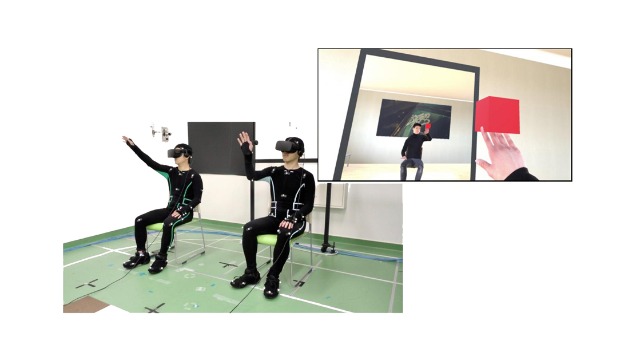 The COVID-19 crisis has led to a significant increase in the use of cyberspace. The cyberspace enables us to work together at distant places and interact with remote environments and individuals by embodying virtual avatars or real avatars such as robots. However, the limits of avatar embodiment are not clear. Furthermore, it is not clear as to how these embodiments affect the behaviors of humans.

Therefore, a research team comprising Takayoshi Hagiwara (graduate student) and Professor Michiteru Kitazaki from Toyohashi University of Technology; Dr. Ganesh Gowrishankar (senior researcher) from UM-CNRS LIRMM; Professor Maki Sugimoto from Keio University; and Professor Masahiko Inami from The University of Tokyo aimed to develop a novel collaboration method with a shared avatar, which can be controlled concurrently by two individuals in VR, and to investigate human motor behaviors as the avatar is controlled in VR.

Takayoshi Hagiwara explains “we chose to investigate the arm reaching action because it is a well-established empirical task for investigating motor behavior. Movement straightness and hand jerk are well-known characteristics of human reach behavior, and the shared avatar’s movement is straighter and less jerky than those of participants. These results suggest that humans prioritize the movement of the shared body over their own individual movements.”

Furthermore, Professor Michiteru Kitazaki added that “virtual reality can change the appearance of a body via different avatars. The results of our study indicate that humans can also change a one-to-one mind-body correspondence by sharing an avatar with two individuals. The participant implicitly infers their partner’s intention to cooperate and subsequently chooses a straighter trajectory for optimizing the predictability of their partner’s avatar trajectory choice.”

Interactions using avatars in virtual reality or robots are considered as an important future mode of communication between people. It is expected that the shared body will be a new collaboration method. Hence, the researchers will investigate as to how the shared avatar’s movement can be optimized by averaging with different weights of movements of two individuals based on their ability or reliability difference. Furthermore, the researchers will investigate as to how our minds and social relationships change after using a shared body.

This article has been republished from materials provided by Toyohashi University of Technology. Note: material may have been edited for length and content. For further information, please contact the cited source.