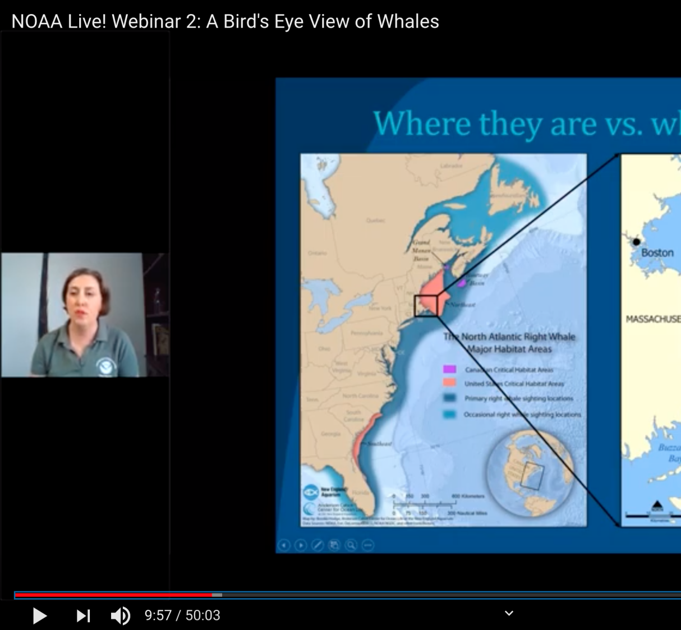 In the midst of school closures across the country and an international disruption of daily life due to the spread of the novel coronavirus, new educational resources tailored to meet an audience of stuck-at-home students have begun to emerge.

One of those resources has come from a collaboration between Nicole Bartlett of Mashpee, a regional coordinator for the National Oceanic and Atmospheric Administration; and Grace Simpkins of Falmouth, an educator and marine outreach specialist for the Woods Hole Sea Grant program, a NOAA initiative with connections to the Woods Hole Oceanographic Institution. Ms. Bartlett is also the vice chairwoman of the Mashpee School Committee.

Ms. Bartlett said the idea to facilitate the webinar series came to her when she saw a post on Facebook from a friend who was looking for educational resources on whales for her children.

Ms. Bartlett realized that as a NOAA regional coordinator, she had access to both the scientists who could offer expert presentations and the virtual infrastructure that would allow her to host large virtual meetings.

Ms. Bartlett reached out to Ms. Simpkins and they quickly established the framework for the series, which will occur every Monday, Wednesday and Friday at 11 AM for the duration of the school closure.

Ms. Simpkins said her work for the Sea Grant program involves outreach in schools on Cape Cod, work that would normally take place this time of year but has been halted by school closures. She was looking for a way to engage with the school communities despite the closures, she said.

As a result, Ms. Simpkins and Ms. Bartlett have spearheaded the creation of “NOAA Live!” a webinar series that features speakers from NOAA’s nationwide network of scientists.

So far the topics have included the aerial study of whales, satellite oceanography, deep ocean exploration, and meteorology. Each webinar is moderated by either Ms. Bartlett or Ms. Simpkins and features a NOAA scientist who speaks about his/her work. Those watching the webinar have the opportunity to ask questions. The moderator then feeds a selection of questions to the speaker over the course of the presentation.

Ms. Bartlett said the broad network that NOAA offers has allowed the series to produce “cool collaborations” among scientists across the country.

“We have so many people with so much expertise and interesting backgrounds and careers,” she said. “We knew kids would be interested.”

In only the first week of webinars, the series was reaching an audience that stretched across the globe. Alison Henry, a member of NOAA’s North Atlantic right whale aerial survey team, presented to an audience of more than 300 viewers from across the country, stretching even across the Atlantic Ocean to the United Kingdom and Luxembourg.

Ms. Simpkins said the presentations offer students from around the country access to the work of NOAA. They will also give local students a vision of NOAA as a nationwide network, as opposed to only a regional institution.

In addition, Ms. Simpkins said, the presentations share scientific content and information on possible career paths to young people in an online environment that parents can trust is moderated and safe.

Ms. Bartlett said she is still in the process of programming future webinars. She said she aims to create a set of topics that touches all of the work done at NOAA. Some future topics will include hurricane hunting, drones, and a week devoted to presenters who are working in Alaska.

Ms. Bartlett said that in the face of the coronavirus pandemic, she “wanted to help out somehow.”

“It feels really good to do something valuable at a time when a lot of our traditional work has come to a bit of a standstill,” she said.

A full list of previous and upcoming “NOAA Live!” webinars can be found at seagrant.whoi.edu.