Vienna Philharmonic purrs back to life after pandemic pause | The Buzz 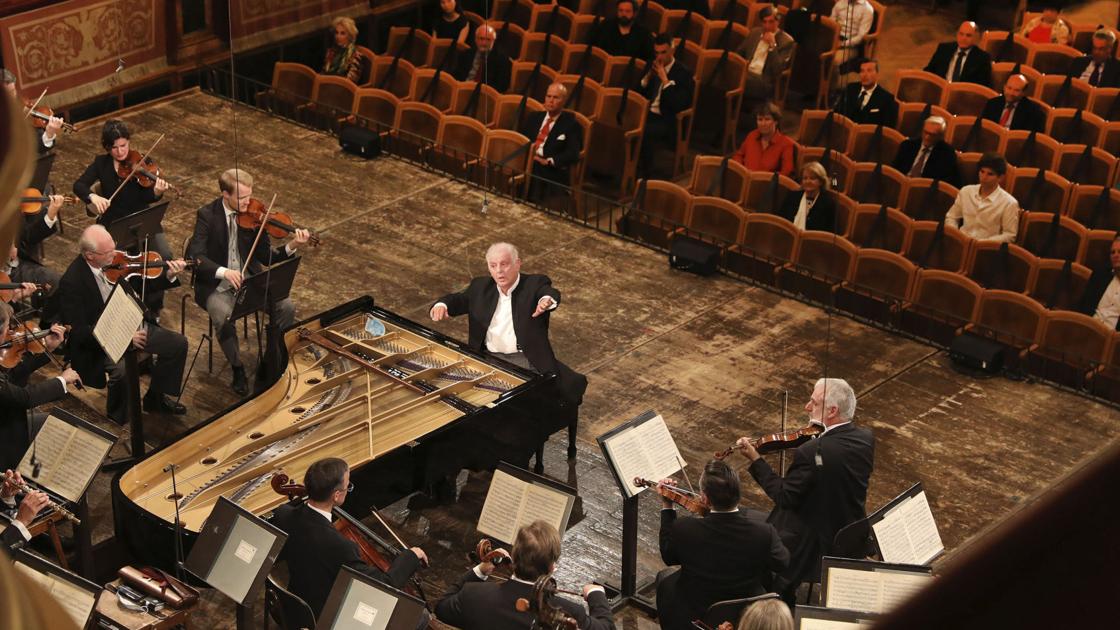 Vienna Philharmonic purrs back to life after pandemic pause | The Buzz

The Vienna Philharmonic returned home, and its famous strings purred for the first time since March 10.

Its 2,854-seat Musikverein, considered by many the world’s most beautiful concert hall, was filled with only 100 people Friday for the first of three days of programs with Daniel Barenboim. Because of the negligible number, tickets were distributed to family, friends and donors for among the first performances by a major orchestra since the pandemic paused the season.

During the three-month gap, the orchestra players struggled to fill their time. Michael Bladerer, a contrabass, recalled talking with Daniel Froschauer, a first violinist.

“We had a walk every day for one hour just to discuss the issue,” Bladerer, also the CEO, said in a telephone interview.

“Even if we are not allowed to play a concert, we want to do some recordings or just to play for ourselves, because we are quite convinced that we need to play as an orchestra,” interjected Froschauer, the orchestra chairman. “The best soccer teams like Real Madrid, they have to play together.”

“It was different than we are used to it with the full audience,” Bladerer said. “Of course, it had a little bit more reverb.”

In the music world, the Vienna and Berlin Philharmonics are considered the very top rank, able to command the choice conductors and superlative soloists. Long criticized for its refusal to admit women, the Vienna Philharmonic ended its ban in 1997 and has 18 women among its 145 current members.

While many if not most U.S. orchestra members were furloughed by administrators desperate to trim payroll during the coronavirus crisis, the Vienna Philharmonic is a self-governing collective. Its members hold dual roles, selected from the pit orchestra of the Vienna State Opera — where they are collecting 80% of their salaries under government programs.

Players all tested negative for COVID-19 before the performance and wore masks before and after the program. They will be subject to regular testing.

Dr. Fritz Sterz was brought in and experimented with sodium choloride to determine air flow. He measured fog clouds at a maximum of 20 inches (50 centimeters) from musicians’ mouths and noses, and approximately 30 inches (75 centimeters) from the end of a flute.

There was no social distancing on stage.

Musicians were not paid for the three weekend shows, including a televised performance Sunday morning. They included Beethoven’s Fifth Symphony, the same music they played in Munich on the final night before the shutdown.

“Our colleagues, they called me and they said Daniel: We must play. We want to create. We want to work,” Froschauer said. “You could tell that every member’s playing was at the fullest expression.”

Upcoming are three concerts each with conductor Riccardo Muti this weekend and Franz Welser-Möst the weekend after, replacing a canceled trip to New York’s Carnegie Hall with Barenboim from June 19-21. In August, the orchestra shifts to the Salzburg Festival. Then it returns to the Musikverein in September for the start of next season.

“If everything is in a good way, maybe in September they will say 1,500. It could happen,” Bladerer said. “Maybe in October they’ll say let’s do the full thing.”

Copyright 2020 The Associated Press. All rights reserved. This material may not be published, broadcast, rewritten or redistributed without permission.