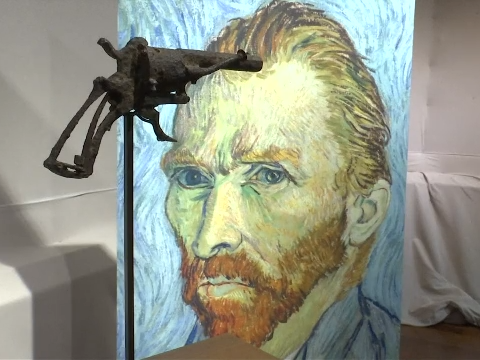 The gun believed to have been used by the Dutch painter Vincent Van Gogh to commit suicide will be up for auction in Paris with an estimated price of 45-thousand to 67-thousand dollars.

Van Gogh settled in the French town of Auvers-Sur-Oise towards the end of his life, upon leaving the Saint-Remy Asylum where he was recovering from mental illness,

There, he painted several works, including “Wheatfield with crows,” believed to be his last.

On July 27, 1890, Van Gogh went to a field behind the castle in Auvers-Sur-Oise, pulled a gun from his shirt, and aimed the gun at his chest.

He fainted from the gunshot, but was able to make his way back to the inn owned by Arthur Ravoux, where he was staying, and died two days later.

About 70 years later, a farmer who was tilling the field where Van Gogh committed suicide found the gun and handed it to the inn’s current owner.

It hung above the counter for several years.

Despite its inconclusive attribution, the Van Gogh museum in Amsterdam had displayed the revolver in a 2016 exhibit on Van Gogh and his mental illness.