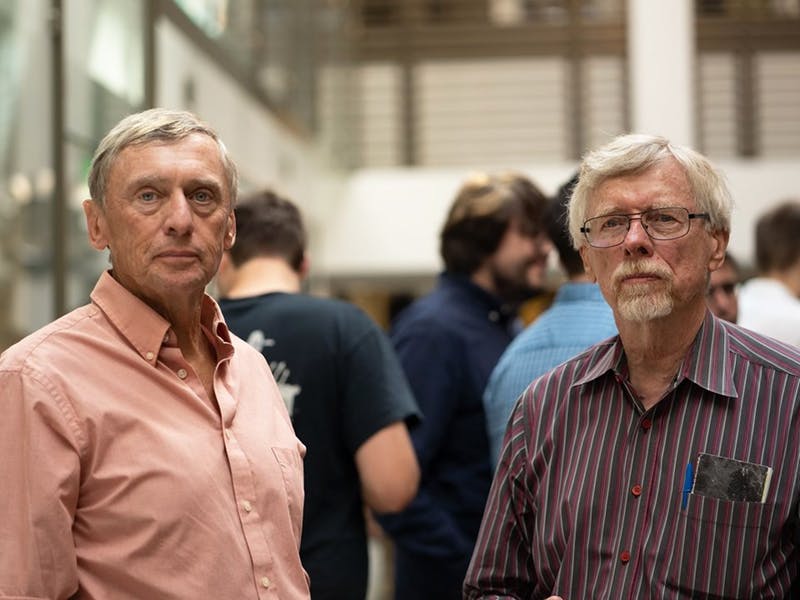 Two Duke political science professors have known each other and worked together since graduate school. Last week, they accepted the 2019 Barbara Sinclair Legacy Award for shaping the field of American legislative politics.

“Moving into the top ten, that was considerably helped by having both of them in our department and their reputation,” Vanberg said.

Aldrich and Rohde first met as graduate students at the University of Rochester in 1970. Rohde recalled his time as a Ph.D. student fondly, describing it as “one of the happiest times of my life.” Aldrich added that he was “awestruck” by his classmates.

“It was remarkable,” Rohde said, “I don’t think any one of us imagined the collective success we would have.”

Both Aldrich and Rohde credit that achievement, at least in part, to the innovative approach to political science taken at the University of Rochester.

“We were on a mission,” Aldrich said. “We came to believe in the primary rationale behind the University of Rochester graduate program. Many of us got there thinking that one of the things interesting to study—especially political elites, like congressmen—is to watch them strategize: the gaming of their plans, how they interact with one another.”

Rohde agreed, though he noted that the political science community at large was slow to catch onto the University of Rochester’s new perspective.

In the end, their way of thinking won out.

Get The Chronicle straight to your inbox

Signup for our editorially curated, weekly newsletter. Cancel at any time.

“We published a lot, we published in the very best places, we started to win prizes, and gradually the discipline was persuaded that this was meritorious,” Rohde said.

Although the two only spent one year together in graduate school, they were later reunited as associate professors at Michigan State University. There, in 1980, they published the first book in their series “Change and Continuity,” with the late Paul Abramson, a professor of political science at Michigan State University. The biannual series uses survey data and election results to describe the factors that drive each national election.

Aldrich left Michigan State to join the faculty of the University of Minnesota before coming to Duke in 1987. Rohde went on to become the chair of the Michigan State political science department before joining Aldrich at Duke in 2005.

Over the course of his career, Aldrich said he has been most proud of “the students [he has] turned out.” Vanberg commended his and Rohde’s role in training graduate students and mentoring new faculty members at Duke.

A close second, Aldrich said, would be the work he has done with Rohde on the theory of conditional party government, which seeks to explain the source of power for political parties in Congress.

Nearly 30 years after Rohde first laid out the foundation of conditional party government in his 1991 book “Parties and Leaders in the Postreform House,” the strength of our political parties is clearer than ever in our current time of partisan polarization.

Aldrich and Rohde both contend that an end to partisan polarization is possible, but neither is too optimistic.

Highly contested issues, such as climate change, have the potential to divide political parties even further, Aldrich explained. He pointed to the implications of rising sea levels affecting those on both sides of the political spectrum.

“That’s South Carolina, Alabama, Mississippi and the Gulf Coast, as well as it is New York or Boston,” he said. “So [rising sea levels] would affect both Republican and Democratic cities.”

Aldrich’s and Rohde’s most recent work, “Change and Continuity in the 2016 and 2018 Elections,” was published this year and was co-authored with Jamie Carson, UGA Athletic Association professor of public and international affairs II at the University of Georgia, and Brad Gomez, associate professor of political science at Florida State University.

Rohde said it will be his last publication before he retires at the end of this semester.