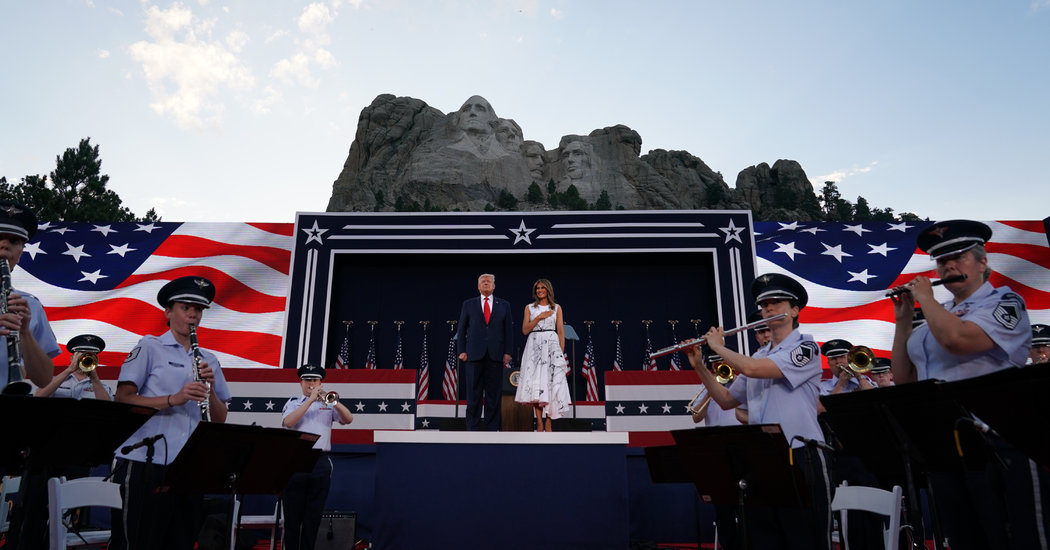 WASHINGTON — Standing in a packed amphitheater in front of Mount Rushmore for an Independence Day celebration, President Trump delivered a dark and divisive speech on Friday that cast his struggling effort to win a second term as a battle against a “new far-left fascism” seeking to wipe out the nation’s values and history.

With the coronavirus pandemic raging and his campaign faltering in the polls, his appearance amounted to a fiery reboot of his re-election effort, using the holiday and an official presidential address to mount a full-on culture war against a straw-man version of the left that he portrayed as inciting mayhem and moving the country toward totalitarianism.

“Our nation is witnessing a merciless campaign to wipe out our history, defame our heroes, erase our values and indoctrinate our children,” Mr. Trump said, addressing a packed crowd of sign-waving supporters, few of whom wore masks. “Angry mobs are trying to tear down statues of our founders, deface our most sacred memorials and unleash a wave of violent crime in our cities.”

Mr. Trump barely mentioned the frightening resurgence of the pandemic, even as the country surpassed 53,000 new cases and health officials across the nation urged Americans to scale back their Fourth of July plans.

Instead, appealing unabashedly to his base with ominous language and imagery, he railed against what he described as a dangerous “cancel culture” intent on toppling monuments and framed himself as a strong leader who would protect the Second Amendment, law enforcement and the country’s heritage.

The scene at Mount Rushmore was the latest sign of how Mr. Trump appears, by design or default, increasingly disconnected from the intense concern among Americans about the health crisis gripping the country. More than just a partisan rally, it underscored the extent to which Mr. Trump is appealing to a subset of Americans to carry him to a second term by changing the subject and appealing to fear and division.

“Most presidents in history have understood that when they appear at a national monument, it’s usually a moment to act as a unifying chief of state, not a partisan divider,” Michael Beschloss, the presidential historian, said before the speech.

Most politicians, including former Vice President Joseph R. Biden Jr., the presumptive Democratic nominee, this year were forgoing any of the traditional holiday parades and flag-waving appearances. The vast majority of fireworks displays in big cities and small rural towns have been canceled as new cases reported in the United States have increased by 90 percent in the past two weeks.

As he traveled to South Dakota for the huge fireworks display at Mount Rushmore National Memorial, Mr. Trump, however, had a different message: The sparkly, booming show must go on at all costs in the service of the divisive message and powerful images he wants to promote.

Under the granite gaze of Washington, Jefferson, Lincoln and Theodore Roosevelt, Mr. Trump announced plans to establish what he described as a “vast outdoor park that will feature the statues of the greatest Americans to ever live,” an apparent repudiation of the growing pressure to remove statues tied to slavery or colonialism.

As he arrived, Air Force One performed a flyover of Mount Rushmore. His campaign promoted the stunt online, calling him “the coolest president ever.”

In the amphitheater below, few in the packed crowd practiced any social distancing as people waved signs that referred to CNN as the “Communist News Network.” As he observed a flyover by the Navy’s Blue Angels, Mr. Trump sat on a packed dais with the first lady, Melania Trump, the national security adviser, Robert O’Brien, and Mark Meadows, the White House chief of staff, none of whom wore masks.

As the president departed Washington for South Dakota on Friday, at least five states — Alabama, Alaska, Kansas, North Carolina and South Carolina — reported their highest single day of cases yet. Newly reported cases of the virus were rising in all but a handful of states, and many large cities, including Houston, Dallas, Jacksonville and Los Angeles, were seeing alarming growth.

Mr. Trump planned to follow up his trip with a “Salute to America” celebration on Saturday on the South Lawn at the White House, marked by a military flyover and the launch of 10,000 fireworks on the National Mall.

Mayor Muriel E. Bowser of Washington has warned the gathering violates federal health guidelines. The Trump administration, which controls the federal property of the National Mall, pushed for the celebration, ignoring a mayor whom officials view as a political rival.

Throughout his presidency, Mr. Trump has tried to bend events to his will, often using social media to drive home his alternate version of reality and, thanks to the power of repetition and the loyal support of his base, sometimes succeeding. But the president’s attempt to drive deeper into the culture wars around a national holiday, during an intensifying health crisis that will not yield to his tactics, risked coming across as out of sync with the concerned mood of the country at a moment when his re-election campaign is struggling and unfocused.

“I don’t think it will work, because what he is trying to do is pretend that the situation is better than it is,” Mr. Beschloss said.

Mr. Beschloss compared Mr. Trump to Woodrow Wilson, who presided over the influenza pandemic in 1918 by trying to pretend it was not happening, and to Herbert Hoover, who in 1932 tried to project that the Great Depression was not as bad as people were saying.

“People voted him out because they felt he did not understand the suffering,” Mr. Beschloss said, referring to Hoover.

Mr. Trump has consistently played down the concerns over spikes in new cases, even as many cities and states have had to slow or reverse their reopenings, claiming that young people “get better much easier and faster,” that the death rate is declining and that the virus will “just disappear.”

On Thursday, he lauded his administration’s response, referred to the surge in new cases as “temporary hot spots” and focused instead on what he said was evidence of the economy bouncing back.

“A lot of people would have wilted,” Mr. Trump said at a news conference where he praised the latest job numbers. “We didn’t wilt. Our country didn’t wilt.”

Despite his rosy outlook, the coronavirus on Friday for the first time infiltrated Mr. Trump’s family circle. The president’s elder son, Donald Trump Jr., and his girlfriend, Kimberly Guilfoyle, had traveled to South Dakota separately with plans to meet up with the president. But they left before Mr. Trump’s arrival once Ms. Guilfoyle tested positive for the virus and said they planned to cancel all coming events.

Mr. Trump’s show, however, went on without missing a beat. In South Dakota, Mr. Trump enjoys the backing of Gov. Kristi Noem, a Republican, who had invited him to make the trip, which amounted to a second attempt to get his campaign back on track after the disappointing turnout at a rally last month in Tulsa, Okla.

In recent weeks, South Dakota has had one of the country’s most encouraging trend lines. The state has averaged a few dozen new cases each day, including 85 announced Friday. There has not been a day with more than 100 new cases in South Dakota since late May. Ms. Noem said Friday night that many attendees at Mr. Trump’s Fourth of July spectacle had traveled from out of state to attend.

In Washington, however, officials remain adamantly opposed to the celebration planned for Saturday, which White House officials defended as a gathering people could enjoy safely. Administration officials noted that the celebration in Washington was scaled back from last year’s event, when Mr. Trump turned the holiday into a salute to the military, with tanks on the streets of the capital and flyovers from Air Force One as well as aircraft from each branch of the armed forces, as he delivered remarks from the Lincoln Memorial.

Kayleigh McEnany, the White House press secretary, said this week that Mr. Trump had recommended following guidelines set by local authorities only on wearing masks — not on social distancing overall. “The C.D.C. guidelines, I’d also note, say ‘recommended,’ but not required,” she said. “We are very much looking forward to the Fourth of July celebration.”

This year, the National Park Service said it was taking extra safety precautions on the National Mall, installing more than 100 hand-washing stations throughout the area, up from 15 last year. Officials also said they had 300,000 cloth facial coverings on hand to distribute.

“We are committed to providing the American people with a safe and spectacular celebration of our nation’s birthday in Washington D.C., which will honor our military with music, flyovers and fireworks,” a spokesman for the park service said. “We are doing so consistent with our mission and historical practices, and we hope everyone enjoys the day’s festivities.”

The president’s political opponents, however, said the celebrations were about one person, only: the president himself.

“Donald Trump is seeking to aggrandize himself and divide our nation at yet another rally,” said Andrew Bates, a spokesman for Mr. Biden. “Joe Biden believes the presidency is about serving the American people — whereas Donald Trump only exploits it to serve himself.”

On Friday, Mr. Trump spent the day at his golf course in Sterling, Va., before he departed for South Dakota, and White House officials said they had no safety concerns about the trip.

But the virus had already shown it can infiltrate the administration, and the White House has experienced the dangers of staging large gatherings as the pandemic rages. Vice President Mike Pence postponed a planned trip this week to Arizona after Secret Service agents set to accompany him tested positive for the coronavirus or showed symptoms. And at least eight campaign staff members who helped plan Mr. Trump’s indoor rally last month in Tulsa, have tested positive, either before the rally or after attending.

Before the president left for South Dakota on Friday, Trump campaign aides were circulating on social media a doctored image of Mount Rushmore, featuring Mr. Trump’s face carved into the stone next to some of the nation’s most revered presidents.