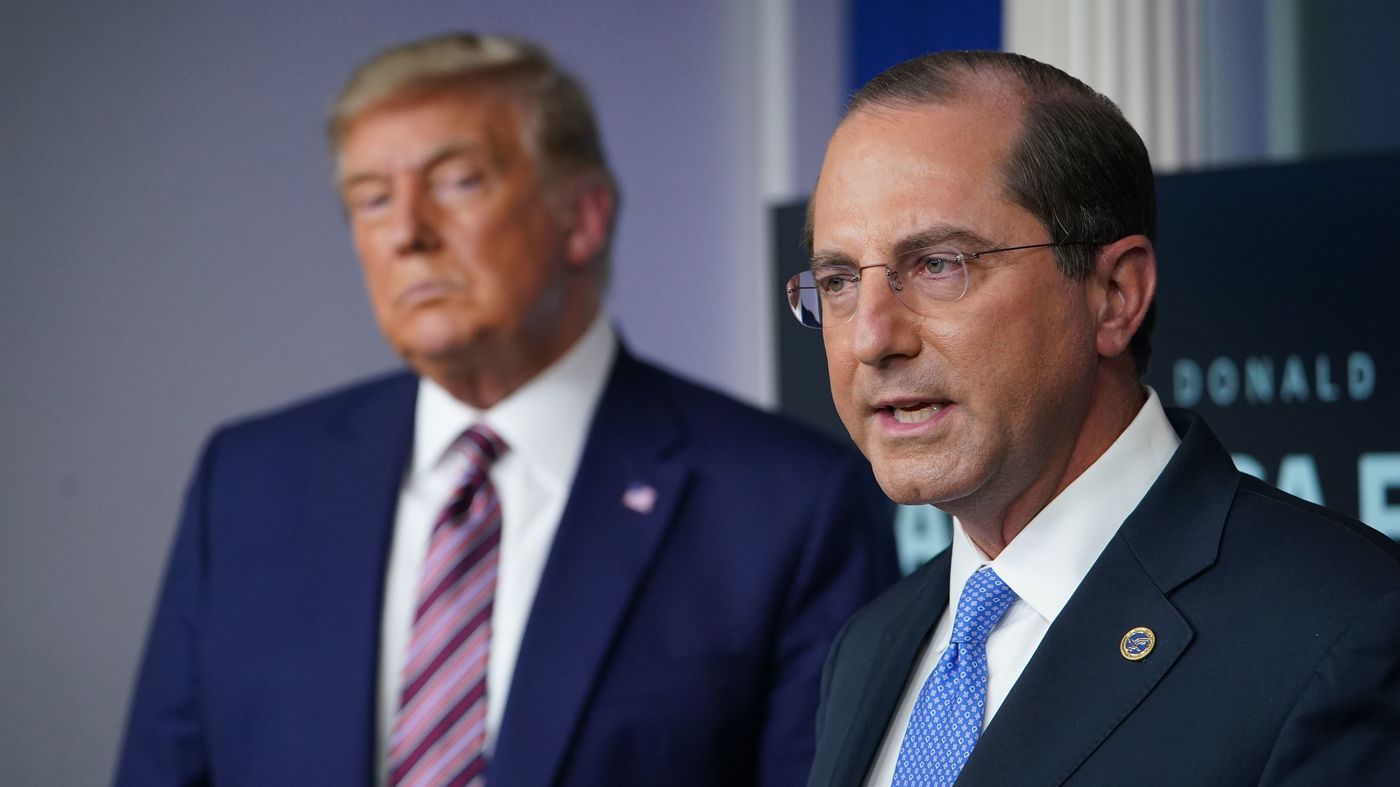 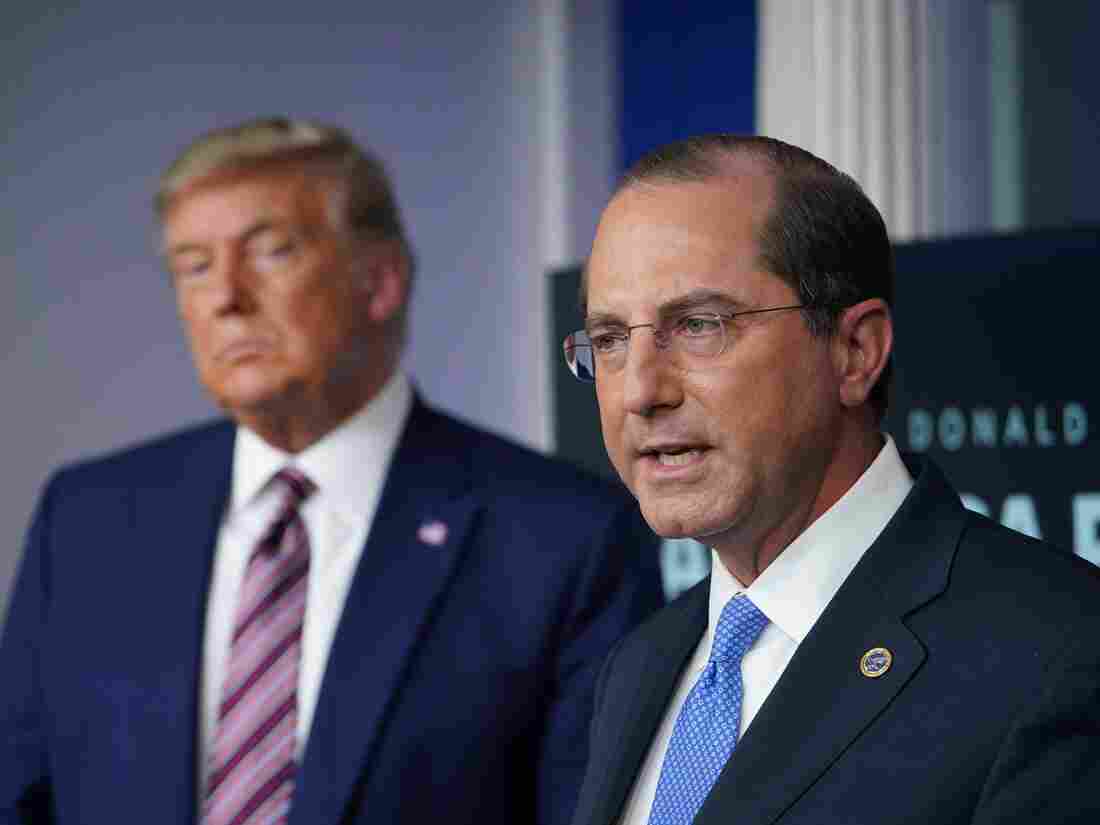 Alex Azar, current secretary of Health and Human Services, spoke alongside President Trump on the issue of drug pricing in November. Azar’s staff issued a rule Nov. 4 that critics say is meant to repeal regulations and bog down the incoming Biden administration’s health policy efforts. 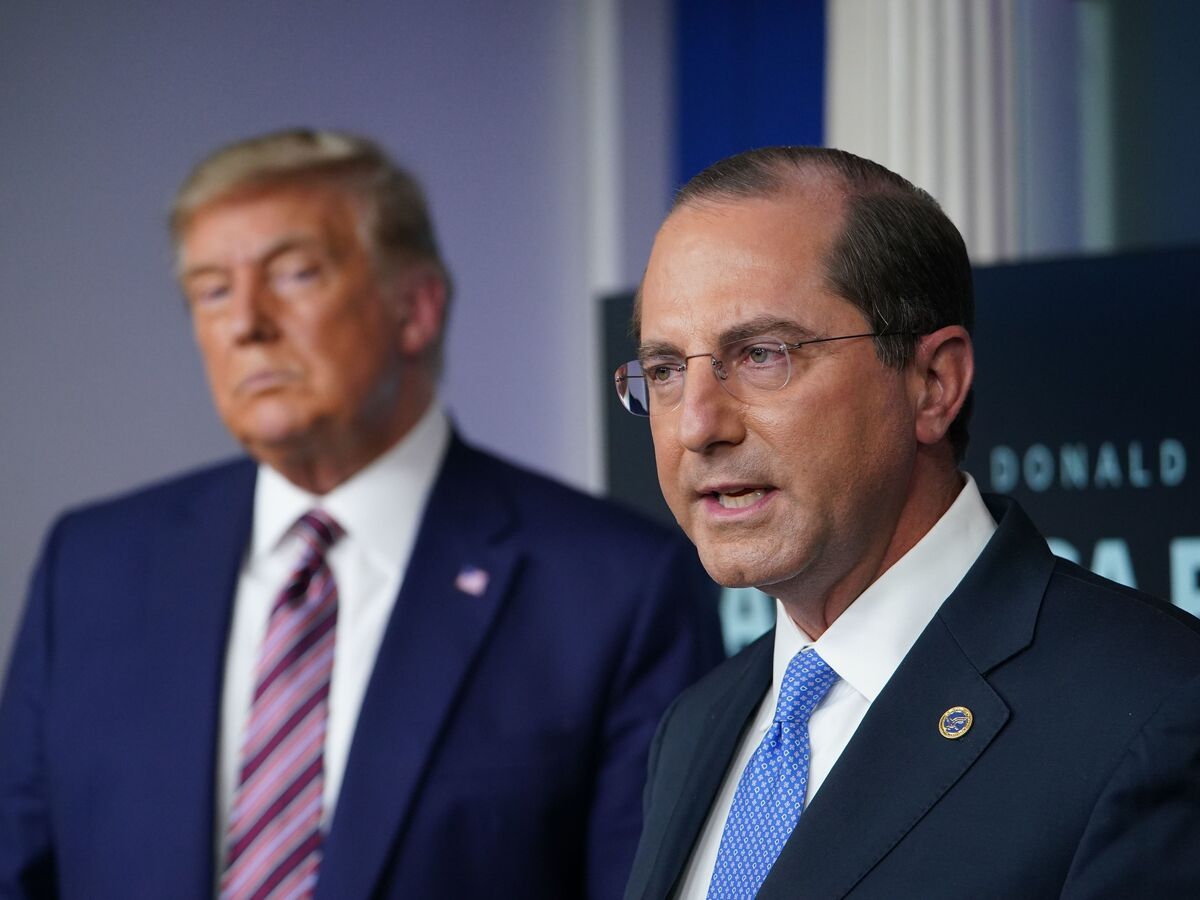 Alex Azar, current secretary of Health and Human Services, spoke alongside President Trump on the issue of drug pricing in November. Azar’s staff issued a rule Nov. 4 that critics say is meant to repeal regulations and bog down the incoming Biden administration’s health policy efforts.

The Trump administration wants to require the incoming Department of Health and Human Services team to review most HHS regulations by 2023 — and automatically void those that haven’t been assessed by then.

The recently proposed rule would require HHS to analyze within 24 months about 2,400 regulations — rules that affect tens of millions of Americans on everything from Medicare benefits to prescription drug approvals.

The move — widely seen as a political ploy by HHS — met a fierce backlash from consumer advocates and health providers who fear it would hamstring federal health officials in the Biden administration, just as they’re seeking to control the COVID-19 pandemic, which has killed more than 280,000 Americans.

Critics see the timing as pointed. The proposed rule was issued Nov. 4 — the day after Election Day, when it appeared President Donald Trump would likely lose his bid for a second term.

“The cynical part of me thinks this is a perfectly designed way to bring the department to a standstill in the next administration,” says Mary Nelle Trefz, health policy associate at Common Good Iowa, a consumer advocacy group.

She says HHS does not have the bandwidth to review all these regulations during the next two years while running its many programs, including Medicaid and Medicare.

If the proposal is finalized before Jan. 20, it is likely to be undone by the incoming Biden administration. In the past, incoming administrations have typically frozen new rules that were pending but have not taken effect before Inauguration Day, to give new administrations time to unwind them.

But in this case, even that chore, Trefz says, would be time consuming and add to a long list of duties for HHS officials while they are trying to attack the pandemic.

HHS officials deny their proposal was aimed at the Biden administration. Brian Harrison, chief of staff at the department, says he first sought legal review of the proposal in April. “Our lawyers moved as fast as they could,” he says, and the rule was written with the expectation it would be implemented during Trump’s second term.

“The outcome of the election had nothing to do with it,” Harrison says.

Democrats and Republicans for the past 40 years have failed to review existing regulations, leaving unnecessary and irrelevant rules on the books, Harrison says.

Efforts to reviews of funding bills and other legislation — known as sunset clauses — have been popular among conservatives for years. The federal government has occasionally used sunset provisions in legislation, such as the tax cuts enacted during the George W. Bush administration, but it is rare to make department regulations subject to these types of mandatory deadlines.

The option is more popular among states, which have adopted varying procedures for measures passed by the legislatures or regulatory boards. Those efforts run the gamut from requiring most initiatives to be reviewed to identifying specific agencies or legislation that must be reconsidered on a regular timetable.

Still, it would be unusual for a state to require an analysis of virtually every regulation in one of its agencies — with a threat to kill the rules if not done in a certain time period.

HHS accepted public comments on the proposal only through Dec. 4, except for the part of the rule affecting Medicare regulations, which has a Jan. 4 deadline. A final rule is expected before Biden becomes president on Jan. 20.

HHS officials don’t point to any specific regulations they say are outdated. However, in their supporting material for the proposal, they note in part:

Harrison says the scarcity of reviews is due to “inertia” and “lack of an incentive mechanism.”

“Many presidents have formally ordered their agencies to review existing regulations, and it has been existing law for 40 years, so simply asking the divisions to review these regulations has been tried for decades and proven to be ineffective,” Harrison notes.

“We need to incentivize their behaviors,” he says.

With more than 80,000 employees, the department should be able to complete the review of 2,400 rules in 24 months, Harrison adds.

Andy Schneider, a research professor at the Center for Children and Families at Georgetown University who has written about the proposal, says he fears the sunset provision will be one of many actions the Trump team will take to distract the incoming administration.

“It speaks volumes that they waited until the end of the fourth year of the administration to decide that the regulatory process needs to be improved,” he says.

Harrison notes that the Trump team’s proposal is authorized by a law signed by President Jimmy Carter in the late 1970s requiring federal agencies to review existing rules. But that law has no provision that calls for cutting regulations that are not reviewed within a certain time frame, Schneider says.

The proposal says the HHS secretary would have flexibility to stop some regulations from being eliminated “on a case by case basis.”

Cost of rules review: Up to $19 million

HHS estimates the reviews would cost up to $19 million over two years. Regulations would have to be reviewed every 10 years under the proposal.

“For every one new regulation added, nearly eight federal regulations have been terminated,” he said in a Rose Garden speech. The Washington Post Fact Checker has said that claim is based on “dubious math and values each regulation as having equal weight.”

One of the few groups to endorse the HHS proposal is the National Federation of Independent Business. That group says the Trump administration proposal would alleviate regulatory burdens on small businesses.

But other groups, such as the American Academy of Neurology, suggest the proposed rule would limit input from interested parties on changes to existing regulations, because it would not follow the usual process of seeking public comments when altering rules. “The AAN is highly supportive of the current process to modify and rescind regulations through the notice and comment period, as it affords stakeholders the necessary opportunity to provide feedback on proposed regulations prior to changes being implemented,” the group told HHS.

The Medicaid and CHIP Payment and Access Commission, which advises Congress, opposes the proposal. “MACPAC questions the need for a proposed rule that creates a duplicative and administratively burdensome new process that is likely to create confusion for beneficiaries, states, providers, and managed care plans,” the group said in a letter this month to HHS. “The new requirements will create additional unnecessary work that will distract the department and CMS from the critical roles they play in our health care system, Medicaid and CHIP amid the pandemic and its resulting economic challenges.”

“The idea that these regulations would be sunset because a regulations timer went too long is not acceptable,” she wrote in comments on the proposed rule.