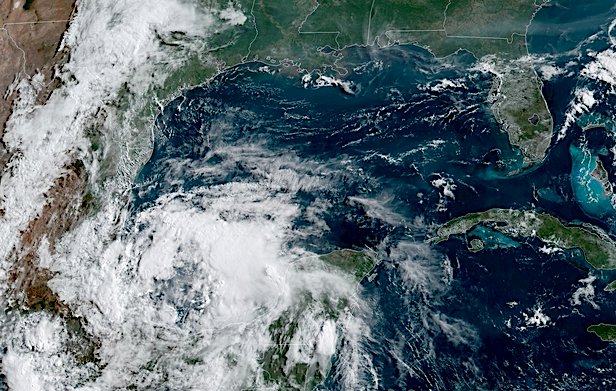 A brewing tropical system not only has the potential to become the second named storm of the Atlantic hurricane season but may also add to the severity and extent of flooding over the central United States this week.

There’s a 60% chance the system could develop into a named tropical system, although it’s unlikely that it would strengthen beyond tropical storm strength, according to AccuWeather Senior Meteorologist Randy Adkins.

A general northward drift or wobble of an expanding area of showers and thunderstorms associated with the tropical system is anticipated.

This image was captured on Monday, June 3, 2019, and shows the mass of clouds associated with a budding tropical system over the southwestern Gulf of Mexico. A non-tropical swath of clouds can be seen from central Texas to eastern Nebraska. (NOAA / Satellite photo)

This track may not only bring drenching downpours to part of the Texas coast in the next few days but may also unleash more general heavy rainfall over the lower Mississippi Valley later this week and this weekend.

The exact track and strength of the tropical system will ultimately determine the magnitude and corridor of the heaviest rain. However, a strong and well-organized tropical feature is not necessary for heavy rain and flooding to occur along its path.

“Conditions are most favorable for development now through Tuesday,” according to AccuWeather Hurricane Expert Dan Kottlowski.

The next name on the list of tropical storms in the Atlantic basin for the 2019 hurricane season is Barry.

In terms of the strength of the tropical system, waters are sufficiently warm throughout the western part of the Gulf of Mexico with the warmest waters over the southwestern part where the system is currently located.

How catastrophic flooding could change the course of the Mississippi River

If the feature remains weak and poorly defined while drifting northwestward, it may allow downpours and flash flooding to spread farther to the northwest over northeastern Mexico and central Texas.

However, if it strengthens into a tropical storm that hugs the coast, it may produce the heaviest rainfall and flooding more to the north and northeast of the center.

While the center of the poorly defined feature may bump the northeastern coast of Mexico and the southern coast of Texas, steering breezes may guide the system on a curved path along the western shores of the Gulf of Mexico.

“The heaviest rainfall is likely to occur over eastern Texas on to the north and northeast,” Kottlowski said.

“Late this week, moisture from the tropical system is likely to interact with non-tropical features over the southern Plains to generate more heavy rainfall over places that are already experiencing serious flooding.”

A general 1-3 inches of rain can fall on a daily basis in the path of the tropical moisture. The moisture associated with the tropical system can produce a daily AccuWeather Local StormMax™ of 6 inches.

It is possible that some areas along the path of the moisture may receive a foot of rainfall in total.

The surge of water moving downstream along the Mississippi River may hit the lower part of the waterway close to the same time as high levels from the Arkansas join in and heavy rainfall from the tropical feature move through late this week and this weekend.

Any heavy rainfall from the lower part of the southern Plains to the middle and lower Mississippi Valley is not welcome at this point. Some rivers have crested at record levels and others are within several feet of record heights.

Rain and thunderstorms from the combination of tropical and non-tropical feature may then be steered across the Ohio Valley and Southeastern states this weekend and perhaps part of the mid-Atlantic early next week.

Download the free AccuWeather app to stay aware of all the latest tropical activity this season. Keep checking back for updates on AccuWeather.com and stay tuned to the AccuWeather Network on DirecTV, Frontier and Verizon Fios.