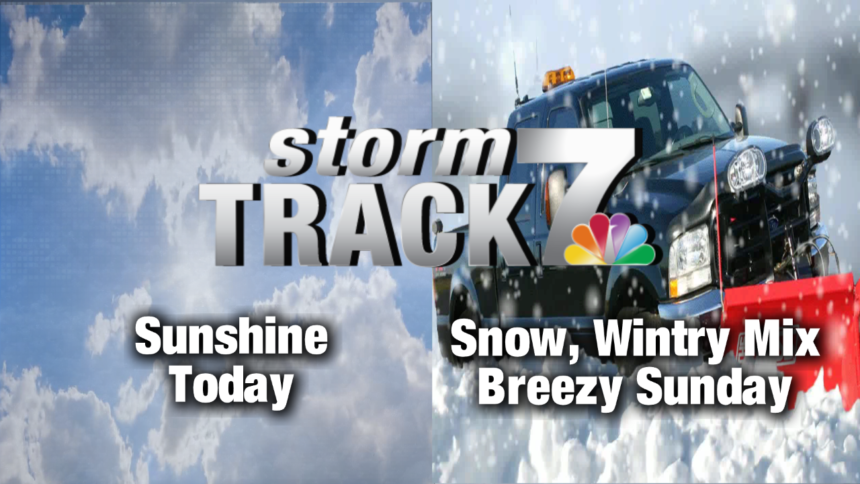 We will have a pretty nice February day today with partly cloudy to mostly sunny skies over the KWWL viewing area. Highs will be a bit cooler with the northwest winds starting us off, but the winds will turn to the southwest and we will climb into the 20s for highs.

A winter storm will track through the region tonight through Sunday. This will cause travel problems with heavy snow in some areas along with an area of freezing rain and drizzle.

Snow will track in late tonight, mainly after Midnight. This could be heavy at times, mainly along and north of Highway 20. The heaviest snow will be north of the Iowa/Minnesota state line, but we will have heavy snowfall at times tonight through Sunday morning. Winds will become stronger… southeast winds will gust to 30 mph as the system tracks in. Areas of freezing rain may mix in at times.

Snowfall will become lighter but will continue through much of Sunday. As dry air works in, more freezing rain and drizzle will track through the area. This may cut down on snowfall amounts, but would add a glazing of ice to some roadways. Sunday’s highs will be warmer… in the low to mid 30s…. so treated surfaces should be okay. However, as winds turn to the northwest later in the day, temperatures will start to drop and surfaces will refreeze, especially after dark.

The heaviest snows will fall in our northernmost counties, including Decorah, Waukon, and New Hampton. They could see 5 to 7 inches of snow, with some isolated heavier amounts possible. South of this band and along/north of Highway 20, we could get 2 to 6 inches of snow with a bit of freezing rain mixing in. Between Highways 20 and 30, more rain and freezing rain will mix in, but we could still see 1-2 inches of a wet, heavy snow, with lighter snowfall amounts south.

WINTER STORM WARNINGS and WINTER WEATHER ADVISORIES are posted along and north of Highway 20 from Midnight Saturday night through Sunday afternoon. This is the area expecting the heaviest snowfall and the worst driving conditions.

Things calm a bit for next week, although we may see a few snow showers here and there. Accumulations are not expected with any of them. Temperatures may cool to below normal by the end of the week.