This day in sports: Red Sox’s Tony Conigliaro carried off field after beaned with a fastball 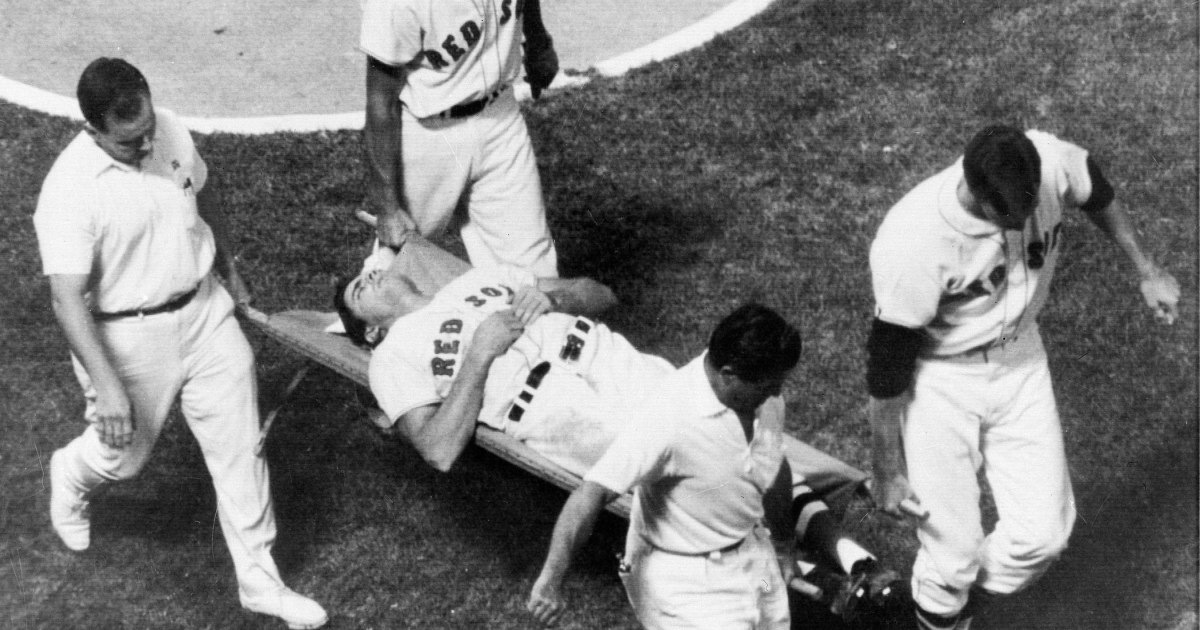 This day in sports: Red Sox’s Tony Conigliaro carried off field after beaned with a fastball

Tony Conigliaro of the Boston Red Sox was carried unconscious off the field on this date in 1967 after he was beaned with a fastball from the Angels’ Jack Hamilton at Fenway Park. Conigliaro, a starter for the American League All-Star team, suffered a fractured left cheekbone and a severe concussion. He also sustained scalp cuts and a badly bruised eye.

The Red Sox fans booed Hamilton but the Boston players were not mad at him or the Angels. “There are no ill feelings,” said manager Dick Williams. “We know Hamilton didn’t throw at him. It was just one of those things.”

Hamilton, who was downcast and greatly concerned about the accident, agreed with Williams. “I wasn’t even trying to brush him back. It was a high fast ball. He may have frozen on the pitch.”

The 22-year-old right fielder not only missed the remainder of the season but all of the 1968 season. At the time he had hit more than 100 home runs.

A look at memorable games and outstanding sports performances on Aug. 18, through the years:

1958 — Floyd Patterson scored a technical knockout over Roy Harris in the 12th round at Wrigley Field in Los Angeles and retained his world heavyweight title. Harris, from Cut and Shoot, Texas, knocked Patterson down early in the fight, but the champion gathered himself and out-boxed the 25-year-old who claimed that he had been weakened by eating a high-protein diet during his training for the fight.

1960 — Lew Burdette of the Milwaukee Braves pitched a no-hitter that beat the Philadelphia Phillies 1-0 at County Stadium in Milwaukee. Although Burdette, 33, faced the minimum of 27 batters, he lost a perfect game when he hit Tony Gonzalez with a pitch in the fifth inning. Gonzalez was erased when Lee Walls grounded into a double play.

1977 — The Dodgers’ Don Sutton pitched his fifth one-hitter that tied a National League record. Sutton gave up a two-out single in the eighth inning to Marc Hill of the San Francisco Giants in a 7-0 win at Dodger Stadium. Sutton struck out seven and walked four, and got run support from home runs by Davey Lopes and Reggie Smith.

2000 — Tiger Woods tied the 36-hole scoring record in the PGA Championship at Valhalla Golf Club in Louisville, Ky., with a five-under-par 67 and took a one-stroke lead over Scott Dunlap. Woods, at 11-under-par 133, tied the mark in relation to par that was set by Mark O’Meara and Ernie Els in 1995. Woods went on to win the tournament and became the first player to take three majors in a calendar year since Ben Hogan in 1953.

2000 — Darin Erstad of the Angels made a spectacular diving catch in left-center field on a sinking line drive by Yankees catcher Jorge Posada in the 10th inning that saved the winning run from scoring at Yankee Stadium. In the next inning, Erstad followed up the catch with a home run to right field that gave the Angels a 9-8 lead and eventually the win after New York went out in order to end the game.

2004 — Paul Hamm of the United States made one of the biggest comebacks in Olympics gymnastics history when he won the men’s all-around gold medal at the Summer Games in Athens, Greece. Hamm moved up from fourth to first place in the final rotation when he finished on top in the parallel bars and high bar after a disastrous landing in the vault sent him stumbling off the mat. He earned scores of 9.837 in his last two events.

2013 — For the first time, the European women’s team won the Solheim Cup, played at the Colorado Golf Club in Parker, Colo. Caroline Hedwall of Sweden was the first player in the 23-year history of the event to win all five of her matches against the Americans. She finished with a 1-up victory over Michelle Wie in the singles final that gave Europe the 14 points it needed to take the Cup home.

2016 — Usain Bolt of Jamaica completed an unprecedented third consecutive sweep of the 100- and 200-meter sprints, and raised his status as the most illustrious male sprinter in Olympic history at the Summer Games in Rio de Janeiro. After he had won the 100, Bolt sprinted to victory in the 200-meter dash in 19.78 seconds, defeating Andre de Grasse of Canada, for his eighth Olympic gold medal.