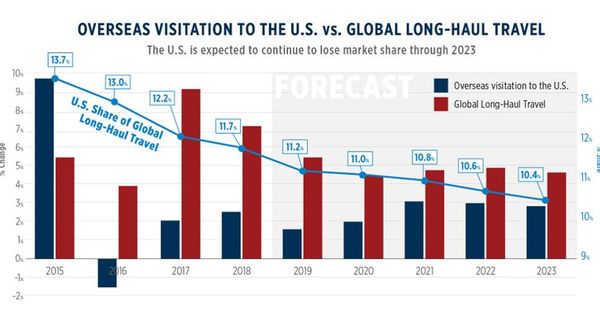 The United States, which three years ago lost its long-held lead as the fastest-growing destination for international travelers, will see its share of cross-border travel growth fall again this year before it begins to grow, albeit slowly, once again.

But the U.S. Travel Association, a trade group representing various companies and sectors within the broad travel industry, forecasts that America’s share of international travel growth will continue to trail that of the rest of the world through at least 2023.

That’s not entirely surprising, given the:

“We often have to remind people that travel is a U.S. export just like agricultural and manufactured goods,” said Roger Dow, president of the U.S.T.A. In fact, he added, “it’s our No. 1 services expert and No. 2 export overall.”

To be sure, the United States remains the single biggest destination in the world for travelers traveling beyond their own borders. But the trend for global market share of foreign visitors to the U.S. has declined ever since 2015 and will continue decline to at least 2023 according to USTA’s new forecast out this week. In 2015 the U.S. captured 13.7% of all travelers from around the world who took trips outside their homelands. This year the U.S. share will be down to around 11.2% and is forecast to slide further to just 10.4% by 2023.

Travel as a whole – and foreign travel to the United States – has an enormous impact on the nation’s economy. U.S. travelers spent $933 billion on travel in the U.S. in 2018, a number that this year is expected to reach $970 billion this year once all the numbers are in. Meanwhile, international visitors to the U.S. spent $156 billion in this country last year and are expected to spend $154 billion this year. By 2023 Americans are forecast to spend more than $1.1 trillion on travel in this nation, while foreign visitors’ spending in America is forecast to reach around $177 billion.

But USTA’s Dow highlights his belief that the United States currently “is not capturing the full economic potential of overseas travel” bound for this country.  What he calls “turnkey policy solutions” could help the travel industry reach more of its economic potential.

For starters the USTA is strongly urging legislation reauthorizing “Brand USA,” a kind of Convention and Visitors Bureau travel promotion agency not just for individual cities or destinations but for the nation as a whole. Established in 2009 by Congress, Brand USA is waiting for Congress to finish work on new legislation reauthorizing it and correcting an error in previous legislation that stripped the travel promotion agency of its funding mechanism beginning Jan. 1, 2020.

Thus far Brand USA has been funded by $10 out of every $14 paid by international travelers who come to the U.S. under the Visa Waiver Program. The fee is called the ESTA or Electronic System for Travel Authorization fee. But in a scramble to get a new budget in place in 2018 Congress redirected – apparently unintentionally – that ESTA fee money to the general budget rather than the Brand USA program. To correct that mistake Congress must pass legislation by the end of this year. The proposed fix already has been reported out of committees in both the House and the Senate but is still awaiting final approval by full votes of full chambers.

The ESTA fee money directed to Brand USA previously has been and would be once again – if passed  – matched dollar for dollar by a broad consortium of travel companies. Brand USA claims that its efforts bring 6.6 million additional international travelers to the U.S. each year over the number that would come were Brand USA not actively promoting the U.S. as a travel destination. The economic value of those additional 6.6 million foreign visitors a year is estimated to be worth more than $21.8 billion. That includes the economic impact of around 52,000 U.S. travel industry job that are sustained by those additional 6.6 million foreign visitors and their money.

Beyond the reauthorization of Brand USA, Dow says the number of foreign travelers visiting the U.S. each year also could be boosted by passage of the new U.S.-Mexico-Canada trade pact that would replace the Clinton era North American Free Trade Agreement. He says passage of the USMCA, on which House negotiators on Monday reported reached a compromise that could speed the new trade treaty to a vote on the House floor, could increase the travel’s economic impact on the nation by another $1.7 billion annually, including the impact of 15,000 additional U.S. jobs created directly or indirectly as a result of those additional foreign travelers coming here.

“It’s clear that USMCA is smart policy and we urge Congressional leaders to move it to a full vote as quickly as possible,” Dow said Monday.

He also is urging the federal government, through Congressional, Presidential or agency policy actions, to help increase the number of foreigners traveling to, and spending more money in the United States by: