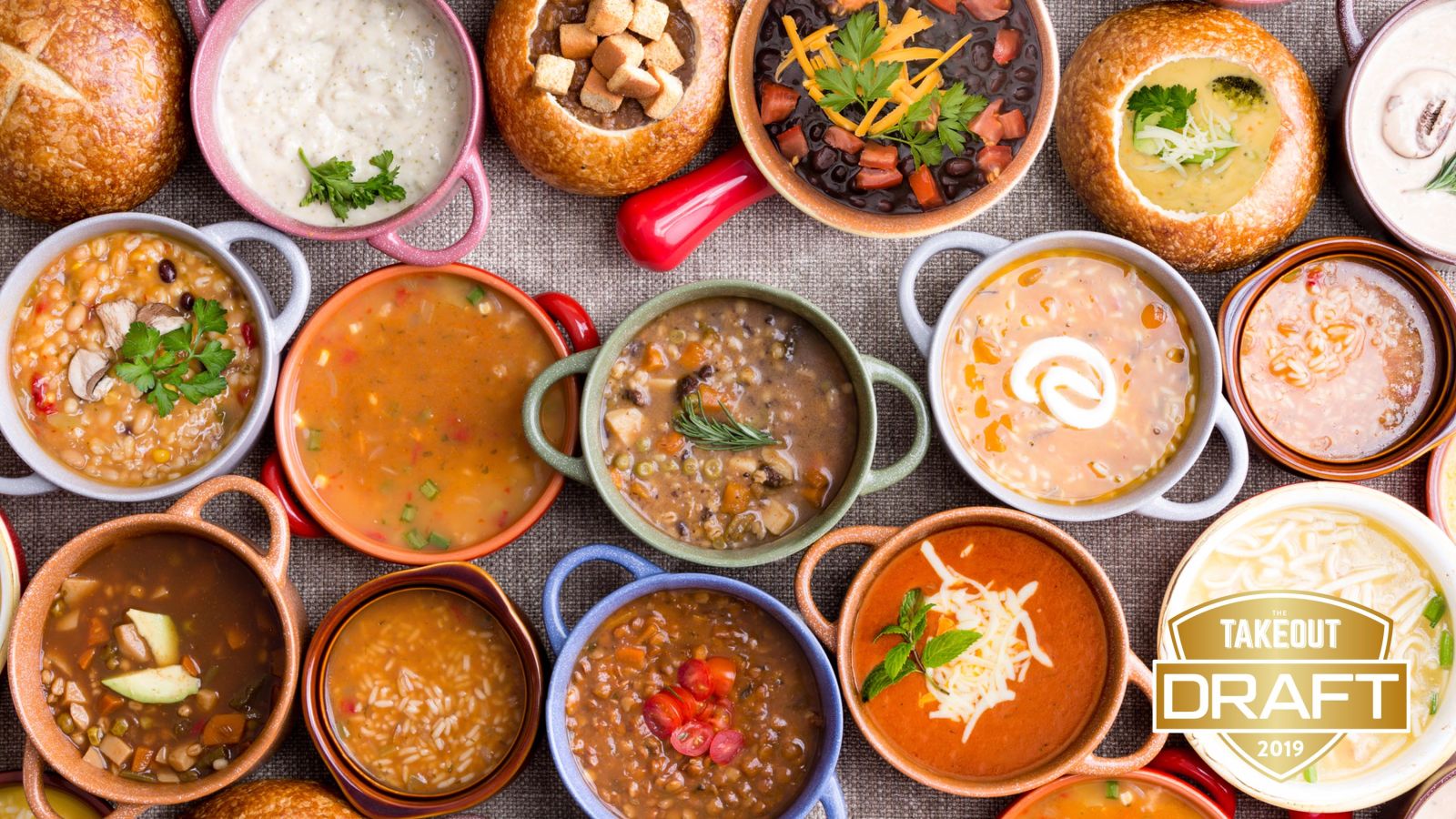 Welcome, dear readers, to The Takeout Draft, our recurring feature that combines our love of food, fantasy sports, and arguing on Slack.

Every week, we will select a topic of conversation from the food and drink world. Takeout staffers will then field a team via the snake draft format. After five rounds, The Takeout commenteriat will vote on who they believe was victorious in that week’s draft. At the end of the year, the staffer with the most weekly victories will select a charity of his/her choice that The Takeout will make a donation towards.

This week, we’re joined by Takeout contributor Dominick Suzanne-Mayer, and our draft topic will be that summertime favorite: soup! Our draft randomizer has selected an order:

Dominick Suzanne-Mayer: I’m going to have to follow my instincts and go with butternut squash bisque. Despite our mid-summer conversation here, when I think soup I think piercing Midwestern winters, and therefore, a rich, flavorful, and warm-in-every-sense soup. But if I show up for the rich texture and the decadent flavor, it’s the sweetness of the butternut squash that really ties the whole dish together for me, and makes me crave it the second it’s sweater season.

For the record, people who ask “Why are you doing soup in the summer?” The answer is: Hell if we know.

KP: OK, I’m so glad Dom didn’t go for this soup, because I was certain it would’ve been chosen first overall. The best soup of all time is French onion soup. Beef and sweet onion broth, that crunchy-soggy bread, but the best part is peeling the cheese from the side of the crock.

Also I was on a bistro tear a few months ago and was so glad I learned to make my own French onion soup. Makes owning a propane torch worthwhile.

All this week, The Takeout’s Kevin Pang will be cooking from Anthony Bourdain’s Les Halles Cookbook …

KB: When is owning a propane torch not worthwhile, I ask you.

Alright, my first-round pick is a Bernot household staple, a Panera bread favorite, and mostly a vat of liquid cheese pretending to have vegetables in it: broccoli-cheddar soup.

DSM: A soup so fundamentally good that it’s even solid at Subway, most of the time.

This is a revelation

DSM: As long as you’re willing to accept Kate’s “vat of liquid cheese” observation, I’ll consider this a moderate hill on which to die.

KB: The broccoli is just there for texture and the appearance of nutritional value.

For my next pick: the O.G., the classic, the soup we all know and love, America, say hello to: chicken noodle soup! (air horn)

I gotta say though, it’s not my favorite soup, but I would’ve chosen it because it seems obligatory

KB: There’s a Bird/chicken joke on the tip of my tongue and yet

KP: OK, for my next pick, I’m going with my actual favorite soup, but it falls to this No. 5 spot because it’s season-dependent. It’s gazpacho. When I was in Madrid years ago, I had a cup of zesty gazpacho in the middle of the sweltering Spanish summer, and it remains one of the most delicious things I’ve ever tasted. Deeply savory, cool, bright, peak-summer tomato sweetness. It was perfect. Just exquisite.

I make gazpacho every weekend during August.

KP: Barney, of course: Go back to Russia!

DSM: Kevin, you might’ve just sold me on cold soup after years of back and forth. Will report back in July sometime.

And speaking of soups that are always good, but can really benefit from a particular kind of regional experience, I’ll take clam chowder next.

None of the b.s. Manhattan versions for me, though.

DSM: I’m a big heavy soups person in general. I had the chance to eat it in New England a few years ago, and that was about as good as I can imagine any clam chowder, or any soup, being. I’ll argue there isn’t a better use for clams, and when you get the right creamy, melts-on-your-tongue broth going, it’s exactly what people think when they think of “comfort food.”

And for my next pick, I must be true to mine own self, and roll with egg drop soup.

KB: I feel like the texture of egg drop soup is a love/hate dichotomy for a lot of people. I love it but I totally understand people’s aversion.

KP: I’m Asian and I love that slippery texture in food — but even I find it a bit gloopy.

DSM: I say this with the caveat that when done badly, it can be gelatinous and texturally unsettling, and I have received it at my home in this state many a time. But when it’s done really well, when the egg is down to flavorful wisps and you have that savory, lightly yolk-textured broth? I’ll hold to that as one of the best common delivery items, period.

For the record, I spent a week in New Orleans and Cajun Country, Louisiana and my favorite was the one at Liuzza’s by the Track. I know it’s the favorite of a lot of NOLA friends, too.

This is my stingier way of eating lobster, because you usually get those nice big chunks but you’re not paying $45 for a lobster tail or whatever.

KP: God I love lobster bisque, especially from a fancy-ass steakhouse. But do not look at the caloric count, I beseech you.

KB: Apparently all of my favorite soups are mostly dairy and/or butter.

DSM: Sounds like a bowl full of a big warm hug to me.

KB: Except for this next pick, which is a nostalgic one for me: creamy tomato soup

Grilled cheese and tomato soup—name a more iconic duo. Even without the grilled cheese though, I love the sweet-acid of the tomatoes and cracked black pepper.

Also, obligatory shoutout to the greatest deli on earth, Al’s Deli, which makes an exemplary version.

KP: OK, I gotta rep my Asian brethren: miso soup. Few soups warm me from the inside out. It primes your stomach for the Japanese food about to come. And since I require my body to maintain 15% umami levels at all time, the dashi + miso combination keeps the savory party going.

KB: I love miso soup, too. Hard to argue with that one.

DSM: That’s a soup I can enjoy at any time of year, honestly.

Next for me is another diner/family restaurant staple, alongside chicken noodle: minestrone. There may be an argument that it’s less clearly defined in recipe terms than many of the others we’ve discussed. But I am very Italian, and also tend to be a kitchen-sink kind of home cook, and it speaks perfectly to both facets. It can be as hot as chili, as savory as stew, or as salty and flavorful as chicken noodle. Whatever you like.

As long as you have some decent beans for the base, it’s just about always good.

KB: Yeah I do feel as though minestrone is a wild card.

I’m always nervous to order it at restaurants because it’s unclear what I’ll be getting, exactly.

DSM: That’s the fun. It’s the mystery box of soups.

DSM: And for my final pick of the soup draft, I’ll go with one of the girthier soups in existence: baked potato soup. It resides on the same “vat of cheese” spectrum as broccoli cheddar, but when the potatoes are well-cooked and have that nice pop when you bite in, it gives the whole thing the kind of “meaty” bite that’s so enjoyable in stew. Also, you add bacon, and it’s as delicious as it is profoundly unhealthy.

KP: We’ve learned a lot about you today, Dom

KB: Ahhh that was going to be my last pick, Dom!

DSM: What can I say? I like a cream soup, and I don’t ask doctors about my cholesterol unless they bring it up first.

KP: My last pick: matzo ball soup. We don’t talk a lot about textural pleasures in soup, but matzo ball is one. I love digging into that baseball-sized matzo ball, squishy and warm and chicken-y. I prefer this over chicken noodle soup, to be honest.

KB: That’s a good one for sure.

DSM: It also seems to be gaining more and more of a profile as a notable chicken noodle alternative.

KP: The joke in our family (though it’s not really a joke because it’s true) is we’re a Chinese family who goes to a Jewish deli on Christmas Day.

There are too many good soups left to choose from. I’m really torn over here.

But okay, I’ll go with one that we cook all the time at Casa Bernot: pozole

The hominy adds great texture, and you can get as spicy as you want when you’re making it yourself.

Some crunchy radish in there is a nice textural element as well.

Is Chili A Soup?

KP: If gumbo is soup, and chili’s a stew, what then… oh never mind

Join us next time on The Takeout Argues Semantics™