The story of female education in the US: from illiterate to top of the class 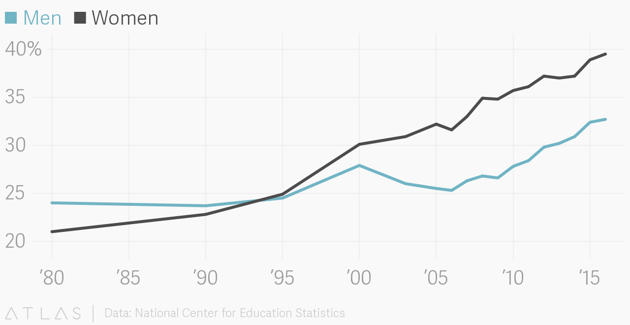 The story of female education in the US: from illiterate to top of the class

With so many young women succeeding academically, education is becoming feminized, and boys are left out. Or at least, that’s the familiar complaint today, perhaps best known from Hanna Rosin’s 2010 article for The Atlantic, “The End of Men.” The thing is, this phenomenon goes back at least 150 years, as the education historian David Tyack and political scientist Elisabeth Hansot explain in the journal Educational Researcher.

Tyack and Hansot write that there was a huge influx of girls into public elementary schools in the first half of the nineteenth century. In 1790, US men were about twice as likely as US women to be literate. But by 1870, girls were surpassing boys in public schools. At the time, the change wasn’t the subject of much national debate. Rather, local school boards and parents quietly began including girls in common schools that had previously served only boys—a process that the education reformer Horace Mann called “smuggling in the girls.”

Debate about “coeducation”—and the word itself—emerged only in the 1850s. Tyack and Hansot write that this was directly related to increased mixing of children of different classes and ethnic groups in urban schools. One report of that era suggested that gender-segregated schools might be useful in shielding girls (presumably middle-class, native born white ones) from the “rude assaults” of boys from inferior social classes. These complaints had little effect. However, coeducation soon stirred up different public fears. Girls began to greatly outnumber boys in high schools, and women came to “monopolize” teaching jobs, especially in cities.

This led to rising worries about women usurping men’s roles. Girls’ success in school made it hard for traditionalists to keep making their old arguments that women were intellectually incapable. Instead, they began relying on new claims that education would harm their health and reproductive capacities. For example, the physiologist Edward H. Clarke made a much-publicized argument against admitting women to Harvard based on the idea that the energy required to learn subjects like algebra would flow from other bodily systems, harming their ovaries.

Meanwhile, Tyack and Hansot write, the popular press began to warn of a “boy problem.” Pointing out that boys were more often held back a grade, and less likely to finish elementary school or continue through high school, critics claimed that the female-dominated education system was ill-suited to masculine energy. A Columbia professor wrote that it was “little short of monstrous that boys during [adolescence] receive almost all their intellectual and moral impulses from women.”

School administrators sought ways to address these complaints. But they generally saw implementing gender segregation as impractical and undesirable. Hiring more male teachers was appealing, but few men were willing to work for the low pay schools offered. Ultimately, the solution many schools settled on, in the early twentieth century, was the creation of new, gendered classes. Boys got vocational classes, while girls got home economics and secretarial courses. Separate physical education classes stressed concerns about women’s health and biology, while encouraging boys to engage in vigorous physical activity.

As we can see today, these changes failed to permanently address worries about the relative success of girls at school.

World Economic Forum articles may be republished in accordance with our Terms of Use.

This article is published in collaboration with Quartz.

The views expressed in this article are those of the author alone and not the World Economic Forum.