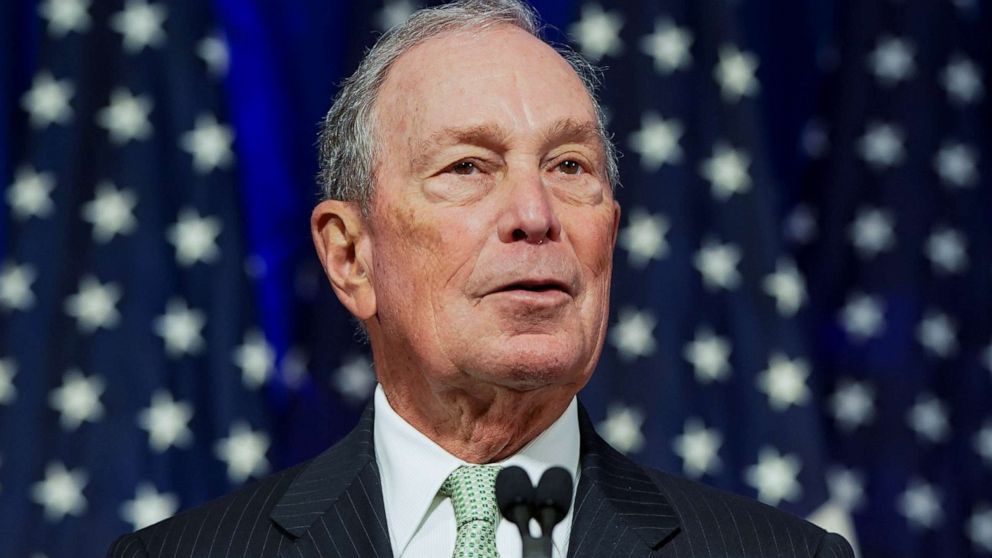 The TAKE with Rick Klein

Add The Note as an interest to stay up to date on the latest The Note news, video, and analysis from ABC News.

Everybody’s talking about him. What’s less clear is if anybody’s afraid of him.

Former Mayor Michael Bloomberg has proven that $37 million — his week-one advertising bid – buys you a piece of the conversation. His new rivals in the Democratic primary are incorporating him into their stump speeches, preempting his arguments by augmenting theirs.

“I literally believe people want something different (than) another wealthy person in the White House,” Sen. Amy Klobuchar said in New Hampshire over the weekend.

Bloomberg used a rather modest first campaign event in Norfolk, Virginia, on Monday to say he’s running because he thinks the possibility of President Donald Trump winning another term has grown larger.

“I think I know what this country needs and that’s what I’m going to focus on,” Bloomberg said.

Yet Bloomberg hasn’t reordered the race — at least not yet. Rival candidates are adopting his wealth to reinforce their messaging, as opposed to shifting campaign strategies around Super Tuesday or the states beyond.

None will be able to compete with Bloomberg’s money. But it may take more traditional metrics — think demonstrated grassroots support, and old-school polling — to convince Democrats that the force he brings requires reckoning with.

The RUNDOWN with MaryAlice Parks

This is what constitutional checks and balances in action look like.

Late Monday, a U.S. district court judge sided with Congress over the White House in a dispute about whether the president could prohibit a former member of his administration from testifying in front of lawmakers.

The judge ruled that former White House counsel Don McGahn must in fact comply with a subpoena from House investigators, writing, “this Court holds that individuals who have been subpoenaed for testimony by an authorized committee of Congress must appear for testimony in response to that subpoena—i.e., they cannot ignore or defy congressional compulsory process, by order of the President or otherwise.”

House Democrats first wanted McGahn to testify as a part of their investigation into whether the president obstructed justice during the FBI’s probe into Russian interference in the 2016 election. According to former special counsel Robert Mueller’s report, McGahn witnessed — and maybe even argued about — actions from the president that could be seen as an obstruction.

While the case could set a precedent for other witnesses currently defying House subpoenas, it also serves as a reminder of judicial timelines. McGahn was issued his subpoena six months ago and Democrats likely do not want to wait that long to hear from witnesses before a possible impeachment vote.

The TIP with Will Steakin

The president will return to the comfort of the campaign trail when he heads back to the Sunshine State on Tuesday night for a rally that the campaign is billing as a homecoming for the new Floridian.

Trump, who announced earlier this month that he was changing his residency from New York because “they haven’t treated me properly,” will return to Florida, leaving behind the Democrats’ impeachment push for a rally in Sunrise, Florida, his first in the state since officially kicking off his 2020 campaign in Orlando back in July.

For Trump, Florida remains a must-win and his campaign is putting some serious resources into place. In addition to Tuesday’s rally, the campaign is holding voter registration get-togethers in Tavares and a “Latinos for Trump” event in Miami.

“Florida was key in 2016 and will be again in 2020,” Trump campaign communications director Tim Murtaugh told ABC News ahead of Tuesday’s rally. “President Trump is going to win Florida again and not even the Democrats doubt that.”

Former White House counsel Donald McGahn must comply with a congressional subpoena, a federal judge in Washington ruled Monday. The ruling came in a case brought by the House Judiciary Committee in August in an effort to enforce its subpoena demanding McGahn’s congressional testimony about events relating former special counsel Robert Mueller’s investigation after President Donald Trump directed him not to comply. Executive branch claims of “absolute immunity” are also being considered in a separate case in the D.C. District Court, related to testimony from individuals called before Congress as part of the impeachment probe.

ABC News’ “The Investigation” podcast. The co-founders of Fusion GPS, Glenn Simpson and Peter Fritsch, speak out to “The Investigation,” breaking their silence about the origins of the now infamous “Steele Dossier” and weighing in on the current impeachment inquiry involving Ukraine. The two former investigative reporters who were originally hired by the Republicans to investigate then-candidate Donald Trump, leading up to the 2016 election, have released a new book entitled, “Crime and Progress: Inside the Steele Dossier and the Fusion GPS Investigation of Donald Trump.” https://apple.co/2BlcX0N

WHAT YOU NEED TO KNOW TODAY

Download the ABC News app and select “The Note” as an item of interest to receive the day’s sharpest political analysis.

The Note is a daily ABC News feature that highlights the key political moments of the day ahead. Please check back tomorrow for the latest.