The Nazis Built 30,000 V-1 ‘Buzz Bombs’ to Terrorize London into Submission (It Didn’t Work Out That Way) 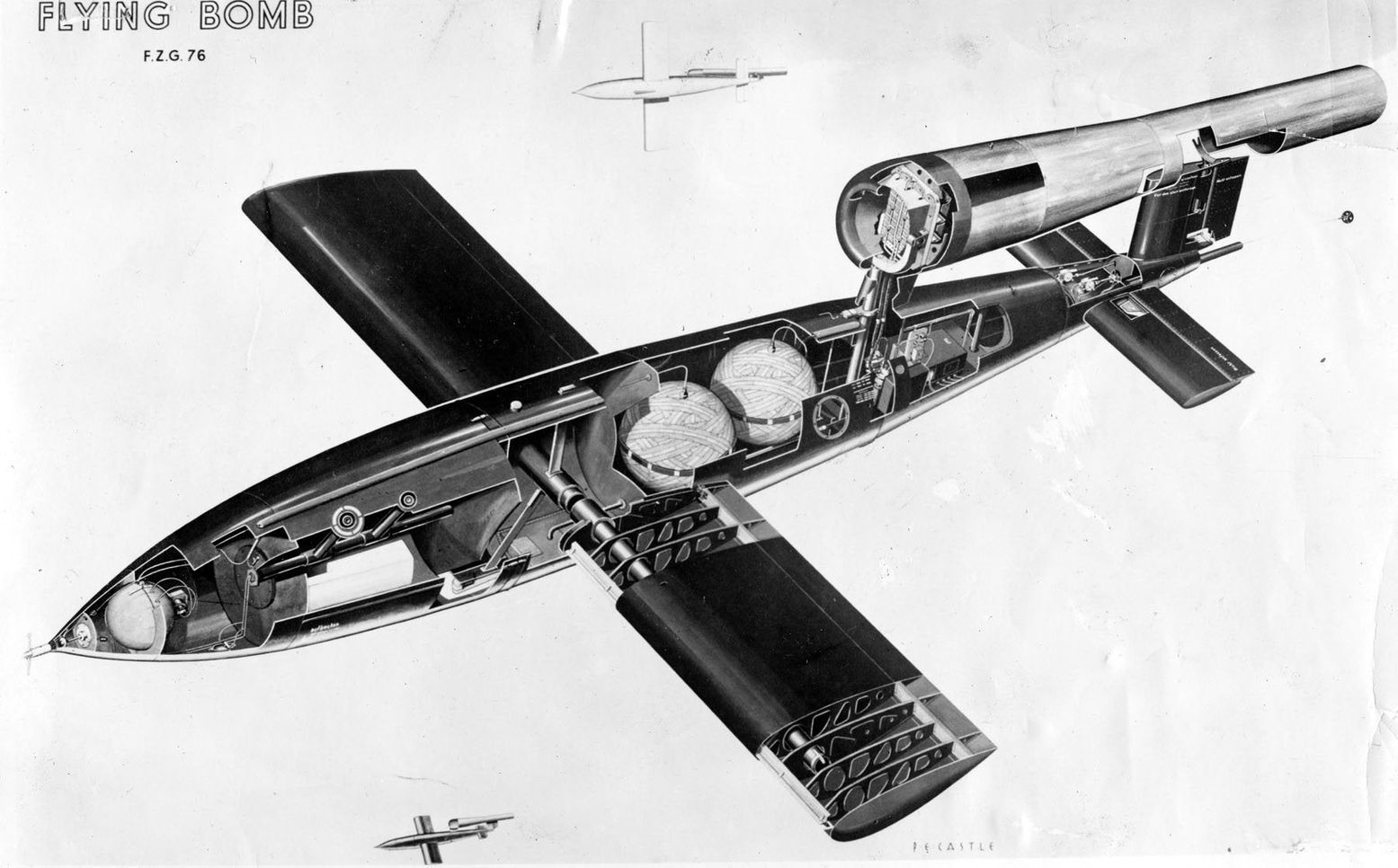 The Nazis Built 30,000 V-1 ‘Buzz Bombs’ to Terrorize London into Submission (It Didn’t Work Out That Way)

On June 13, 1944—a week after the D-Day landing in Normandy—residents of the East London working-class district of Bethnal Green heard an unusual buzzing drone.

Over the last four years, German bombers had intermittently rained death on the metropolis. But now Allied fighters reigned so supreme that Luftwaffe bombers were barely present over Normandy, let alone London.

Nonetheless, a small dark object was seen flitting across the sky at 2,000 feet before it plunged into a railway bridge on Grove Road. Its one-ton warhead ruptured the surrounding buildings, killing six Londoners, wounding 30 and leaving 200 homeless.

In fact, this was the only missile of 10 launched that day that drew blood. But thousands more “buzz bombs” would come droning down from the sky in the following months, as you can see in this wartime recording.

This first-ever operational land-attack cruise missiles was designated the Fiesler Fi 103 Kirschkern (“Cherry Stone”), or FZG-76. But they were better known as V-1s—as in “V” for Vengeance, in retaliation for Allied bombing of German cities.

Earlier in November 1939, German scientist Fritz Gosslau began working on a remote-controlled flying bomb. Indeed, the first cruise missiles were anti-ship weapons remotely piloted into enemy warships by an observer in a nearby aircraft.

But Gosslau was eventually advised that remote control was impractical for delivering long-range strikes. Instead, he devised a pendulum-based gyrocompass that kept a V-1 on straight line course towards a designated target. Its autopilot transmitted course-corrections with blasts of compressed air.

The final design resembled a large steel bomb with stubby plywood wings and tail stabilizers for lift. It was propelled by an Argus jet engine mounted on the rudder that pulsed 3,000 times per minute, producing the missile’s infamous drone.

The buzz bomb had range of 160 miles and flew at 340-400 miles per hour, allowing it to fly from a launch site in Calais to London in just 15 minutes.

V-1s were launched from 36-meter-long platforms oriented towards the target. Air hoses heated up the pulse-jet before the robot bombs were catapulted into the sky using pressurized gasses. As the V-1 cruised at2,000 to 3,000 feet in a straight line, a tiny propeller turning in its nose counted an odometer backwards down a preset distance. Upon hitting zero, the V-1 nosed sharply down into whatever lay beneath it—often falling eerily silent in the second before impact

Redundant electrical and mechanical fuses ensured the weapon’s 2,200-pound Amatol warhead detonated immediately on impact, maximizing casualties. A third fuse was triggered if a dud V-1 was tampered with.

Testing began at Peenemunde in September 1942 as engineers ironed out kinks in its guidance system. Allied intelligence got wind the Nazis had something unpleasant in store and plastered the coastal facility with 600 heavy bombers in August 1943.

Delayed for six weeks but not deterred, the Nazis moved production to the underground Mittelwerke manufacturing complex, which was staffed by 60,000 concentration camp slave laborers—one-third of whom would perish from mistreatment. The factory began churning out V-1s like hotcakes at a cost of only 5,000 Reichsmarks ($27,000 in 2019 dollars) apiece.

Meanwhile, depots and launch facilities were constructed on the French coast faster than the Allies could locate and bomb them.

The V-1 was accompanied by V-3 super cannon—disabled by bombing before it could begin attacking London—and the V-2, the first ballistic missile. The V-2 was also quite deadly and was essentially unstoppable once launched. But each V-2 cost ten to twenty times as much to manufacture as a V-1.

Despite German intransigence in the face of devastating Allied strategic bombing, Hitler believed that sustained terror bombing would cow the ‘soft’ citizens of a democracy into demanding their leaders sue for peace.

The robot bomb Blitzkrieg did have political effects, causing massive military and economic resources to be diverted to combating the V-weapon menace. But ultimately, they only heightened political pressure to accelerate the conquest of Nazi Germany.

The UK developed an elaborate multi-layered defense system in Operation Diver to thin-out the incoming V-1s. Radar-directed air defense patrols formed the forward-layer, but due to the V-1’s high sustained speed, only the swiftest aircraft could reliably pull off an intercept.

At night, Royal Navy Fairey Fireflys and speedy, twin-engine Mosquito night fighters used onboard radar to home in on the missiles before aiming at the hot glow of their engine exhaust.

The U.K. even rushed into service its first operational jet fighter, the Gloster Meteor, to chase V-1s.

However, the buzz bomb’s metal skin proved resistant to rifle-caliber bullets, and a pilot who succeeded in detonating a V-1’s warhead risked being caught in the blast! Allied pilots sometimes resorted to tipping V-1s off course with their wingtips—as photographed here.

The U.K. also deployed 1,600 flak guns—rapid-firing 40-millimeter “pom pom” cannons and heavy 3.7” pieces—to blast V-1s from the sky. Initially, flak only batted down one out of every six incoming V-1s—and that after expending an average of 2,500 shells.

But by August 1944, new gun-laying fire control radars and proximity-fused shells led batteries to bag 60-80% of inbound V-1s, with only 100 shells expended per V-1 kill.

Over 2,000 barrage balloons tethered with thick wire cables sliced the wings off another 231 buzz bombs.

Last but not least, one-quarter of Allied strategic bombing raids were targeted at V-weapon sites—a campaign that cost the Allies 154 bombers and 700 aircrew by one count.

Despite all these measurers, out of 9,251 V-1s Hitler launched at London, roughly one-quarter (2,500) struck the city, killing 6,100 Londoners, and injuring nearly 18,000. As up to 100 missiles rained on London daily, 1.5 million civilians abandoned the city for the countryside.

In September 1944, Allied troops overran the French launch sites in range of London. Instead, between October 13 and March 30, 1945, over 4,000 V-1s were launched from sites in Holland targeting Brussels and Antwerp—the latter the only undestroyed deep-water port available to efficiently supply Allied troops in Western Europe.

After the initial shock, American, British and Polish troops implemented an air defense system called Antwerp-X (see video here) composed of fixed radars and mobile 90-millimeter and 3.7” flak batteries. This time, the combination of radar and proximity-fused stopped all but 5% of V-1s from hitting their target.

Hitler’s grudge against London wasn’t yet settled. Back in July, the Luftwaffe had experimentally launched 50 V-1ss from modified He 111H-22 bombers of III Group/Kampfgeschwader. Now that land attacks were impossible, He 111s flying over the North Sea deployed 865 more V-1s against London instead.

Though German researchers studied mounting V-1s on boats and jet bombers, they ultimately simply devised a 250-mile-range variant called the F-1. 274 were launched at London in March 1945, but only 13 made it to their targets, with the last attack on English soil landing on March 29.

The Economies of Cruise Missile Warfare

By the war’s end, Nazi Germany had manufactured a staggering 30,000 V-1s—a volume of cruise missile production unmatched to this day.

American General Clayton Bissell noted that the V-1s had inflicted considerable damage at much lower expense in lives and equipment compared to the costly strategic bombing raids undertaken by American and British heavy bombers.

But his calculus ignored the effect that strategic raids sometimes severely damaged military and industrial targets, something the V-1 could not do at all reliably: its primitive guidance meant that it landed randomly within seven to seventeen miles of its target—a plot point in the novel Gravity’s Rainbow. That meant V-1s were only useful for terror attacks on civilians.

The U.S. military planned to deploy 75,000 JB-2s against German and Japanese cities, but the war ended before they could be used. However, the Loon and its naval KGW-1 variant were adapted for launch from B-17 heavy bombers, PBY flying boats, surface warships and eventually submarines.

The V-1’s successors fly many times further, skim closer to the ground to evade detection, and can perform maneuvers to circumnavigate air defenses. They benefit from satellite navigation, image-matching computers and infrared-seekers allowing them to land within a few meters of a designated target.