The incarceration lottery: Alabama gambling bill gives nothing to education The incarceration lottery: Alabama gambling bill gives nothing to education

This is an opinion column.

The Alabama Senate passed a lottery bill Thursday, and now it’s headed to the Alabama House. But before you start itching for scratch-offs, there’re a few things about this game you need to understand.

For instance, who benefits? Not Alabama, at least not as much as the bill’s true supporters.

Nor is it about education. None of its revenue would go there.

Nor is it a windfall. The revenue this lottery would bring in is a fraction of what states of similar size rake in with theirs.

No jackpot for education

The greatest trick the gambling interests ever pulled was convincing people that the only way to pay for education would be through gambling. Yeah, gambling is grimy, but look at these kids over here who’ll get to go to college!

That was the pitch then-Gov. Don Siegelman made nearly two decades ago. It’s a rationale that’s been passed from barstool-to-barstool and pew-to-pew, ever since.

But not this time. Significant things have changed. Chief among them, none of this lottery bill’s revenues would go to education.

The paper-only lottery bill, introduced by state Sen. Greg Albritton, would put its revenues into Alabama’s General Fund, not the Education Trust Fund. 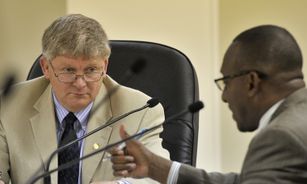 From the General Fund, it would pay for things such as prisons and Medicaid (but not Medicaid expansion). Nothing for K-12 classrooms. No HOPE scholarships for kids with the good grades.

As one of my Twitter pals said, the Alabama lottery would pay for incarceration, not education.

Nor would the bill raise a great deal of money. Even the sponsor, Albritton, says it would increase state revenue by about $167 million a year.

Demographically, South Carolina is more similar to Alabama than any other state. South Carolina has a lottery, and that lottery last year raised $435 million for education there.

But Alabama’s lottery would bring in a little more than a third of that? No one has given a good explanation for why.

There are other reasons here to believe there’s something not right with this lottery bill.

It’s about money (not yours)

State Sen. Jim McClendon, R-Springville, proposed his own lottery bill this year, which would raise money similar to South Carolina. On the State House floor, he described how he modeled his bill after lottery laws in other states. None of those other state’s laws include the word “sovereign,” but for some reason Albritton’s bill does, McClendon said, rhetorically scratching his head.

But everybody watching this debate Thursday understood what he was getting at: A legal consequence of Albritton’s bill is that it would allow the Poarch Creek Indians to negotiate a compact with Alabama for Class III gambling.

The bill also could prohibit Class III gambling at the VictoryLand casino in Macon County, and Greenetrack in Greene County. By doing so, it could give PCI — which pays no taxes — a monopoly on machine gambling in Alabama.

PCI has pumped $4.5 million of campaign contributions into Alabama’s political bloodstream since 2013 (a virtual tie for the largest contributor with Business Council of Alabama’s Progress PAC).

This isn’t a lottery bill. It’s a gambling machine monopoly bill. It’s a bill to benefit one of the largest campaign contributors in Alabama.

But like a lottery, it would produce a lot of losers.

And one big winner.

Kyle Whitmire is the state political columnist for the Alabama Media Group.