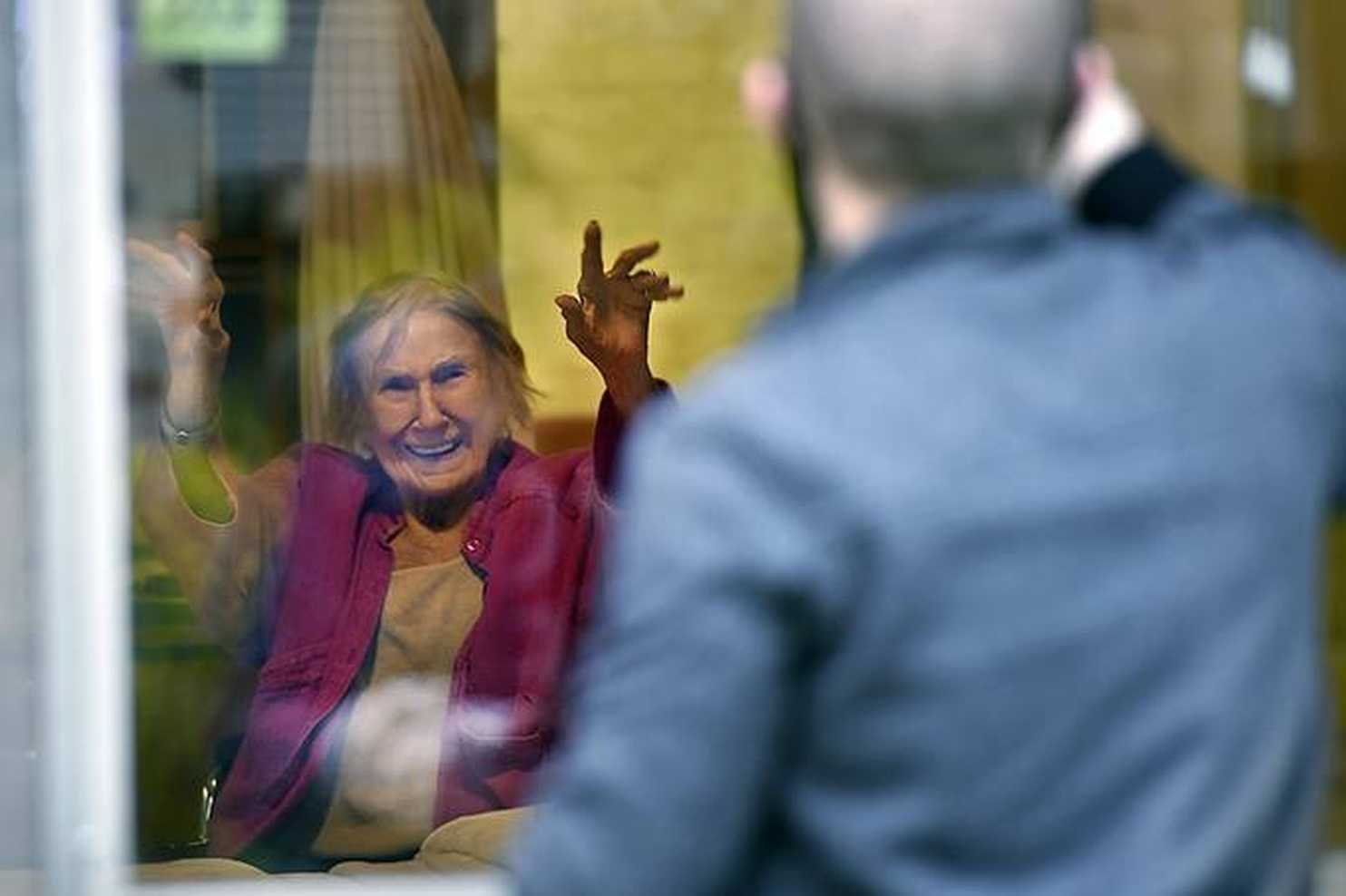 The full picture of the coronavirus’s toll on U.S. nursing homes is finally becoming clear.

Data updated yesterday by the federal government now show that nearly 32,000 American nursing home residents have died of the virus — a figure certain to grow, with 12 percent of all facilities yet to report their totals. Nearly 700 nursing home employees have also died. As of Thursday, more than 106,000 Americans overall had died of the disease.

It may turn out that as many as 4 in 10 covid-19 deaths occurred among nursing home residents.

“We have failed the residents and we have failed the staff as a society,” Michael Wasserman, president of the California Association of Long Term Care Medicine, told The Post’s Peter Whoriskey, Debbie Cenziper and Will Englund.

For the first few months of the pandemic, information about nursing home cases and deaths was murky. Several dozen states refused to make the information public, leading to lawsuits across the country. On April 30, the Centers for Medicare and Medicaid Services stepped in with a rule requiring nursing facilities to report information not only on cases and deaths, but also equipment and staffing shortages.

The agency released an initial trough of information on Monday, showing that about 25,000 residents had died. Yesterday’s update not only upped the death count but also provided a better window into the supply shortages many facilities faced as they tried to contain outbreaks and isolate infected patients.

“We wanted to be as transparent as possible with the American people,” CMS Administrator Seema Verma told reporters.

A sign posted near the entrance to the Kimberly Hall South nursing home in Windsor, Conn. (Chris Ehrmann/AP)

Hundreds of facilities reported shortages in nursing staff and supplies.

“The data released Thursday covers nearly 9 in 10 of the country’s 15,000 federally certified nursing homes,” my colleagues report. “It does not include assisted-living centers and other types of elder-care facilities that are not certified by CMS.”

The American Health Care Association, the trade group that serves as an advocate for nursing homes, has begged for federal subsidies to help facilities buy face masks, gloves and disposable gowns. While the Department of Health and Human Services has allocated $4.9 billion for them, the group’s leaders have said that isn’t enough.

“The reality is that long-term care providers are facing an unprecedented situation that has left them begging for testing, personal protective equipment (PPE) and staffing resources,” AHCA President Mark Parkinson said in a statement. “Just like hospitals, we have called for help. In our case, it has been difficult to get anyone to listen.”

“It’s time that America rally around our long-term care residents just as they did with hospitals,” he said.

The Trump administration is also trying to provide better data on the virus’s toll among black Americans.

All lab tests reported to the Centers for Disease Control must now include information on the patient’s race, ethnicity, age and Zip code, HHS announced yesterday. The aim, officials said, is to standardize reporting so it’s easier to track who the virus is targeting and understand its impact on especially vulnerable populations.

African Americans have been disproportionally infected and killed by the virus, as we detailed earlier this week, but the data hasn’t always been sufficient to understand the full effects. African Americans account for nearly one-fourth of coronavirus deaths in cases in which race is known, according to the COVID Tracking Project.

The ongoing protests over the police killing of George Floyd have resulted in a particular focus on these disparities. CDC Director Robert Redfield apologized yesterday for “inadequate” reporting, as he testified before a House Appropriations subcommittee.

“I want to apologize for the inadequacy of our response,” Redfield said.

Welcome to The Health 202, our must-read newsletter on health policy.

AHH: Some people’s genes may make them more vulnerable to severe cases of covid-19.

A new study by European scientists points to genetic variations at two spots in the human genome, including one that determines blood type, linked to an increased risk of respiratory failure in covid-19 patients, the New York Times’s Carl Zimmer reports. “Having Type A blood was linked to a 50 percent increase in the likelihood that a patient would need to get oxygen or to go on a ventilator, according to the new study,” Carl writes. “… Scientists have already determined that factors like age and underlying disease put people at extra risk of developing a severe case of Covid-19. But geneticists are hoping that a DNA test might help identify patients who will need aggressive treatment.”

The research was based on blood samples from 1,610 patients who required an oxygen supply or needed to be placed on a ventilator.

OOF: Researchers retracted an influential study in a top medical journal, the Lancet, on the dangers of hydroxychloroquine.

Three authors of the study that found the antimalarial drug was dangerous for hospitalized covid-19 patients said they could “no longer vouch for the veracity of the primary data sources,” Laurie McGinley reports.

The drug hydroxychloroquine is displayed by a pharmacist at the Rock Canyon Pharmacy in Provo, Utah. (George Frey/Reuters)

“The study, purportedly based on the health records of almost 100,000 patients around the world, found that hospitalized covid-19 patients treated with the antimalarial drug hydroxychloroquine — a drug repeatedly touted by President Trump — had a sharply higher risk of death and heart problems compared to those who did not receive the drug,” she writes. “It also showed the drug didn’t provide a benefit. The study was ‘observational,’ which is less rigorous that a randomized, placebo-controlled clinical trial.”

Critics raised question soon after the study was published about the data and analysis by Surgisphere and its founder, Sepan Desai.

Now with the retraction, there are concerns within the medical and scientific community that “researchers and even prestigious medical journals are lowering their standards in a rush to publish during the pandemic.”

OUCH: Medical research on deadly rare diseases has taken a major hit during the pandemic.

“This singular focus will inevitably delay much-needed advances for other life-threatening ailments, including cancer, stroke and heart disease, experts say,” Laurie writes. “… Now, as medical institutions explore resuming non-coronavirus research, they say it will be hard to make up for lost time. Some researchers have to rebuild their colonies of specially bred animals. Many labs are implementing staggered work shifts to limit the number of employees at any one time.”

Anissa Merriam, center, was diagnosed with Lafora disease, a rare neurodegenerative form of epilepsy, when she was 14. Planned human clinical trials set to run in 2020 have been shut down amid the coronavirus crisis. (Caitlin O’Hara for The Washington Post.)

In short, there could be a long-term slowdown in the development and approval of new therapies. That could have a particularly devastating impact on those with rare diseases and their families.

Even major companies are having trouble paying their rent.

Some say they won’t be able to pay rent for months after nearly half of commercial retail rents went unpaid last month, Heather Long reports. “The problem for the broader U.S. economy is that when businesses like Ross Stores and T.J. Maxx stop paying rent, it sets off an alarming chain reaction,” she writes. “Landlords are now at risk of bankruptcy, too. Commercial real estate prices are falling. Jobs at property management companies and landscapers face cuts. Banks and private investors are unwilling to lend to most commercial real estate projects anymore, and cash-strapped city and local governments are realizing the property taxes they usually rely on from business properties are unlikely to be paid this summer and fall.”

Small businesses are in trouble, too, and advocates are calling on lawmakers to change the rules on the Paycheck Protection Program loan forgiveness qualifications “so more than 25 percent of the money can be used for rent and other overhead costs. A House bill that passed last week would allow up to 40 percent of the money to go toward rent. The Senate approved the bill Wednesday.”

The number of unemployment claims for the last week of May — nearly 2 million — was the lowest sine the coronavirus began spreading widely.

“The slowing in jobless claims doesn’t mean the United States has any less deep of a hole to dig itself out of,” Heather and Eli Rosenberg write.

In total, more than 40 million people have applied for unemployment benefits during the pandemic.

People wait in line for help with unemployment benefits at the One-Stop Career Center in Las Vegas. (John Locher/AP)

“As states have lifted some of their most severe restrictions in recent weeks, more businesses have reopened — at least partially — and brought back workers,” they write. “But there is still no sense of when commerce will resume at the scale it existed at late last year, or whether there will be a second wave of the virus in the fall and winter. This could create an economy that is trapped between both realities, putting pressure on companies that might not be able to survive at half capacity and wreaking havoc on state and local budgets that could lead to more layoffs later this year.”

Some Food and Drug Administration employees fear political pressure as the agency responds to the pandemic.

Peter Marks, a cancer specialist with nearly a decade of experience at the FDA, quit his role with the White House project meant to rush toward a coronavirus vaccine.

The abrupt move back to his previous role “was the latest sign of the FDA’s struggle to fend off outside political pressure, particularly from the White House, amid the desperate search for a coronavirus cure,” she writes.

“The agency rushed to greenlight the unproven coronavirus treatment hydroxychloroquine for wide use after President Donald Trump touted the drug. At the behest of the White House, FDA officials met with wealthy Trump donor Larry Ellison almost daily to discuss a hydroxychloroquine tracking project.”

An FDA logo is seen at a bus stop on the agency’s campus in Silver Spring, Md. (Jacquelyn Martin/AP)

Health experts both inside and outside of the administration have expressed concern about the White House’s unprecedented push to “intercede at an agency that’s supposed to make independent judgments based on medical science,” Sarah adds.

Protests continue amid the pandemic:

More on the administration’s efforts: