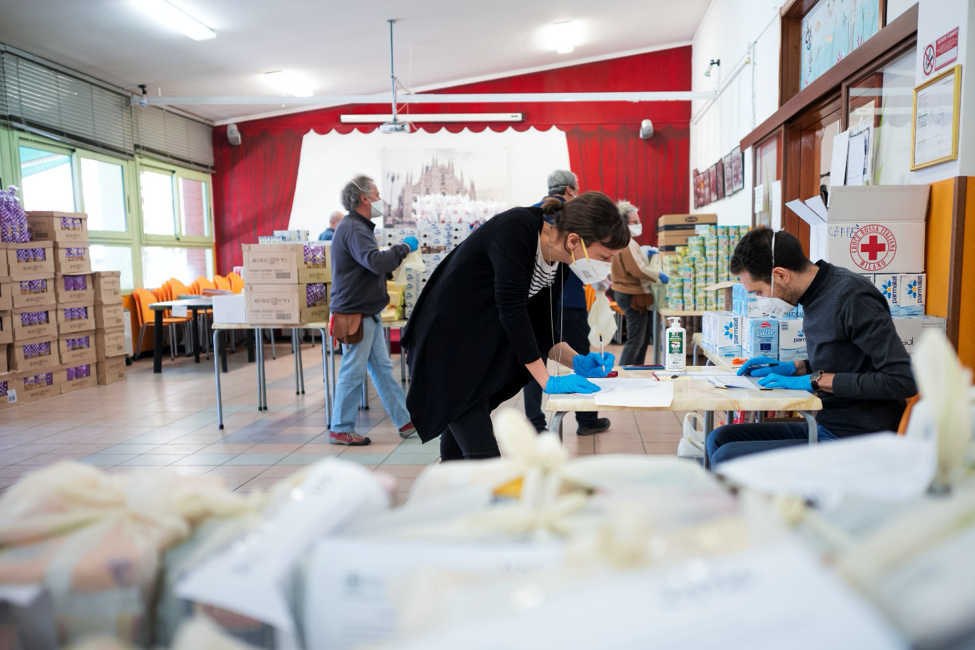 The initiative distributed weekly food aid packages to elderly people, vulnerable families and fragile persons until the end of the Covid-19 emergency, delivered to 6,337 households and a total of 20,744 people, who were identified as in need by the Milan Social Affairs Department and other non-profit organizations. Food packages included staples such as pasta, rice, tomato sauce, legumes, tuna, biscuits, oil, salt, and sugar as well as milk, fruit juices, coffee, cold cuts, and treats, (when available) As part of a collaboration with the Milan Municipal General Market – Sogemi, a hub for the preparation of fresh produce boxes was opened on March 30.  This to ensure recipients received a healthy and balanced diet, including ample fresh fruits and vegetables.

The Food Aid System – Dispositivo di Aiuto Alimentare initiative was promoted and coordinated by the Municipality of Milan in collaboration with more than 30 non-profit organizations as well as private food companies that provided monetary and in-kind donations. It involved more than 180 employees as well as volunteers.  The initiative covered the municipal area of Milan, with its 9 districts being served by 3 logistics hubs and 10 temporary food hub distribution sites. Weekly food aid packages were distributed through the 10 sites until the end of the Covid-19 emergency.

As the Covid-19 crisis unfolded an increasing number of Milan’s citizens, particularly the poor, people with limited mobility, and older people, started experiencing a significant worsening of their access to good-quality food. Containment measures, indeed, together with closures of several associations and charities, triggered a systematic, city-wide intervention. The Food Aid System – Dispositivo di Aiuto Alimentare initiative was promoted and coordinated by the Municipality of Milan in collaboration with many public, private and charity partners.

Those included: public -owned companies such as Milano Ristorazione, AMAT, and SoGeMi; the Protezione Civile of Milan; the Milan Red Cross; as well as non-profit organizations, food banks and charities – Banco Alimentare della Lombardia, Caritas Ambrosiana, IBVA, QuBi Program and Cariplo Foundation. The private sector contributed through both monetary and in-kind donations, and the public promptly responded to a dedicated fundraising campaign.

The food aid system created a model for the more systematic distribution of food in the city.  It was built upon pre-existing networks, but also improved cooperation between a wide variety of private stakeholders, under municipal coordination.  As such, the initiative will be the starting point for the planning of new activities, in line with the Municipality’s Social Affairs Department and Food Policy Office. In addition, the emphasis on ensuring access to healthy fresh produce, and not only processed foods in food aid networks.

“Milan Food Policy has once again become an instrument to face emerging needs of citizens. By building alliances with many players in the city we built the Food Aid System, in order to get close to families and fragile people who, in addition to a health emergency, were also going through a food crisis, ” Anna Scavuzzo, Vice Mayor of Milan in charge of Food Policy