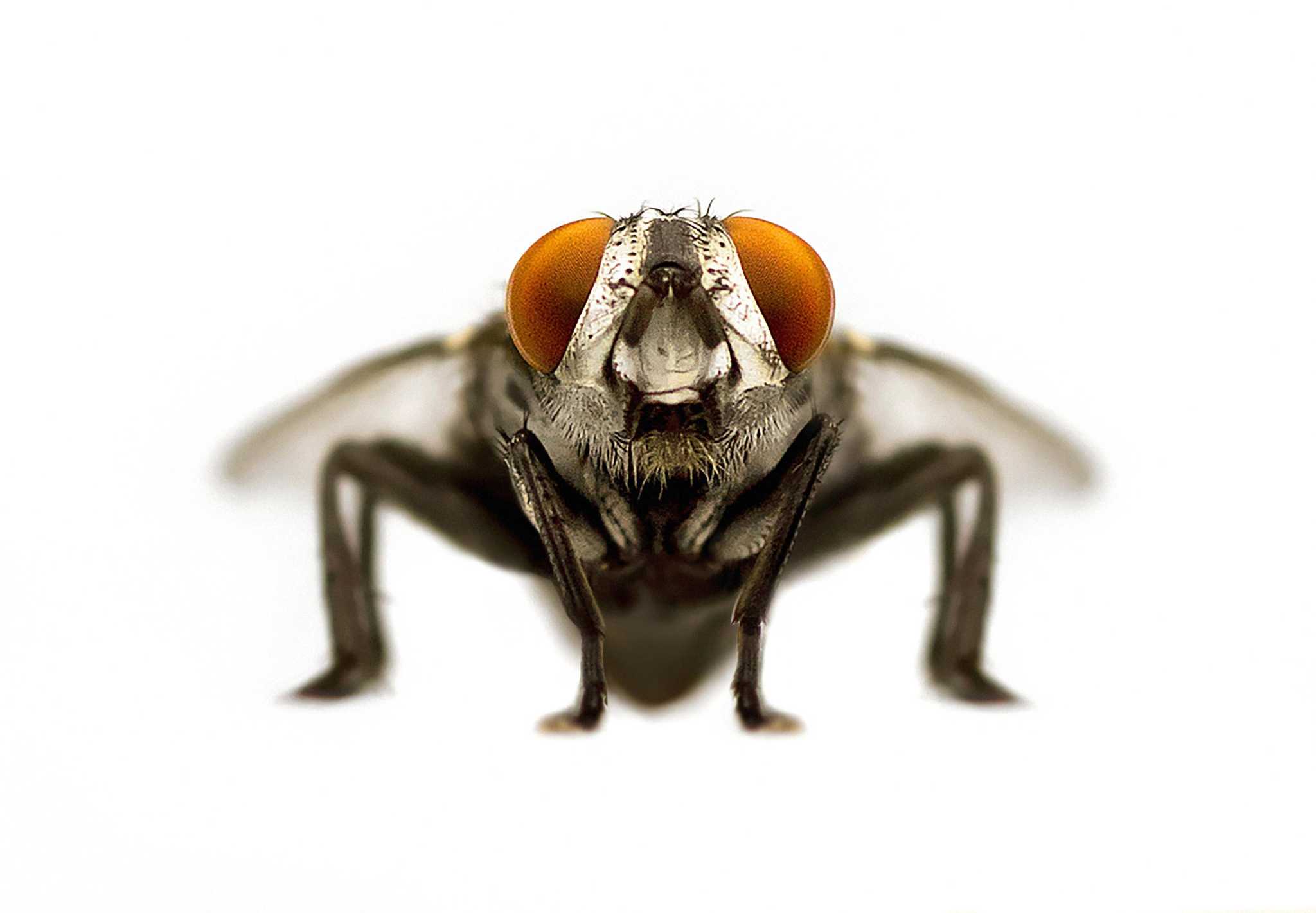 If you’re going to kill a housefly, you might as well do it with a smile. So how about a bright yellow happy face fly swatter?

“People like the smiley face one because it’s different, and it’s not boring, I guess,” said Lindsay Conti, sales executive for Big Star Branding in San Antonio.

Big Star has slapped the logos of more than 30 pest control businesses onto novelty fly swatters, which include 6-inch models for up-close kills and guitar-shaped goodies that play a real deadly tune. But their most popular buzz-killer has to be the one patterned after the world’s most iconic emoji.

Call it a cheeky solution to a timeless problem. Houseflies have plagued humanity for centuries, flitting about our meals, our garbage and our vice presidents. Yet even this disgusting, disease-carrying pest serves a purpose.

“In nature they’re laying their eggs and breaking down fecal material and animals that die,” said Molly Keck, an entomologist with Texas A&M AgriLife Extension Service. “They break that back down to benefit the ecosystem. So their benefit is they’re recyclers.”

They also keep the fly swatter industry buzzing. Here’s a closer look at nature’s most uninvited house guest, the housefly.

The housefly (Musca domestica) is found just about anywhere there are animals and people.

“Their scientific name implies they are one of the few insects that do best around people in domestic situations,” Keck said. “I don’t knew that I’d call them tenacious. They’re just well-adapted and acclimated to be around humans and our waste and eat the things we think of as trash.”

Houseflies make themselves at home wherever there’s garbage or decaying decomposing organic waste, as well as carrion and poop. And of course houseflies invade picnics and other areas where there’s food.

Houseflies measure around a ¼-inch long with a ½-inch wingspan. A pair of translucent wings and six skinny legs pop out from their slightly hairy, gray and black bodies.

A housefly’s head looks like a nightmarish boom box. Most of their noggin is a pair of big red eyes called compound eyes, each made up of thousands of little receptors called ommatidia. Three simple eyes called ocelli sit at the center of the fly’s head above two short antennae.

A housefly’s mouthparts consists of a long, spongy tube called a proboscis with a tip called the labellum. Houseflies don’t bite, but as we’ll learn later, they definitely suck.

Where you find houseflies, you’re sure to also find the green bottle fly (Lucilia sericata). Both flies are about the same save for their appearance. The green bottle fly is slightly larger and looks downright beautiful in comparison with its metallic blue-green and bronze coloration.

Houseflies beat their wings up to 1,000 times per minute, hence the buzzing sound. Yet houseflies can’t fly faster than 5 miles per hour.

So why are these slowpokes so hard to swat? Credit that to another part of their anatomy.

Houseflies see us coming from just about all angles.

“Their eyes almost wrap all the way around their head,” Keck said. “Then the ocelli see changes in light, so when a shadow of your hand is coming above them or a fly swatter they will detect that.”

Remember how houseflies’ compound eyes have thousands of individual receptors? All those receptors create a mosaic for a near 360-degree field of vision.

Houseflies also see seven times faster than we do and can process visuals so quickly it makes us look like we’re moving in slow motion. It may not be sharp vision, but it’s still highly sensitive to form and motion.

The barred owls common around San Antonio are a real hoot

Another freaky fly fact: A housefly’s mouthparts can’t handle solid food, so they either feast on what’s already in liquid form or vomit on it to liquefy it and then soak it up.

As if that wasn’t gross enough, houseflies taste via receptors on their feet called chemosensilla. So when you see a flies scurrying over your lunch or some other organic item of interest, they’re tasting the wares.

Houseflies live only around two to three weeks, but the females can lay as many as 500 eggs in that short lifetime, usually in batches of around 120. Keck noted a housefly can go from egg to adult in about a week.

Houseflies lay eggs in something dead or decaying. Pale white maggots or larvae then hatch from those eggs and help break down their decomposing nursery like nature’s ugliest recyclers.

Once a maggot eats its fill, it enters its pupa stage in a cocoon. A few days later, an adult housefly emerges. Ah, the circle of life.

You’d expect an insect that spends much of its life in garbage, decaying flesh and poop to be a winged Petri dish. Houseflies transmit more than 60 diseases, including cholera, dysentery and salmonella.

“They’re one of the few insects known to carry a significant number of pathogens,” Keck said. “They crawl onto dog feces, then they’re crawling on your hot dog at a picnic. They’re just dirty sponges is what they are.”

Sure, you could swat, spray, stick or shock houseflies into oblivion. But Keck said the best way to control them is through exclusion and sanitation.

Keep garbage in lidded containers and clean up spills and pet feeding areas. And of course cover up any foods outside the fridge.

When it comes to points of entry, shut doors and windows and make sure their screens are secure. You also should caulk over cracks and cover vents as necessary.

Famous flies time. Christianity refers to Satan as the “Lord of the Flies,” which also is the title of William Golding’s dystopian novel about a group of marooned British schoolboys who fall prey to their baser natures.

No shock, the housefly isn’t so popular in pop culture, save for the titular terror behind the 1958 sci-fi film and its even more terrifying 1986 remake.

Both films tell the same story. A scientist creates a matter transporter than can teleport objects, then tests the device on himself. Wackiness ensues when a fly inside the machine fuses with the scientist and turns him into a hideous monster.

The ’58 “Fly” starred Vincent Price as the scientist’s brother, while the ’80s remake by David Cronenberg starred Jeff Goldblum as the eccentric scientist whose grotesque transformation won the film an Oscar for Best Makeup.

“Am not I / a fly like thee?” So mused the great English poet William Blake in “The Fly,” a humbling ode to the insect from his 1794 poetry collection, “Songs of Experience.”

Nearly 200 years later, the great lyrical poet Bono took on the insect in the song “The Fly” from U2’s 1991 album, “Achtung Baby.” The Fly also was the persona Bono adapted for the track’s music video and the band’s Zoo TV Tour, where the Irish frontman rocked black leather and big wraparound shades.

The most famous fly of recent memory has to be the one that perched on the head of Vice President Mike Pence during his October debate with now Vice President-elect Kamala Harris.

Online memes ensued, along with a @MikePenceFly Twitter account. The Joe Biden/Harris campaign even started selling fly swatters just hours after the debate. The swatters sold out overnight.

René Guzman is a features reporter in the San Antonio and Bexar County area. He writes about pop culture and what makes San Antonio so uniquely puro San Antonio. To read more from René, become a subscriber. [email protected] | Twitter: @reneguz