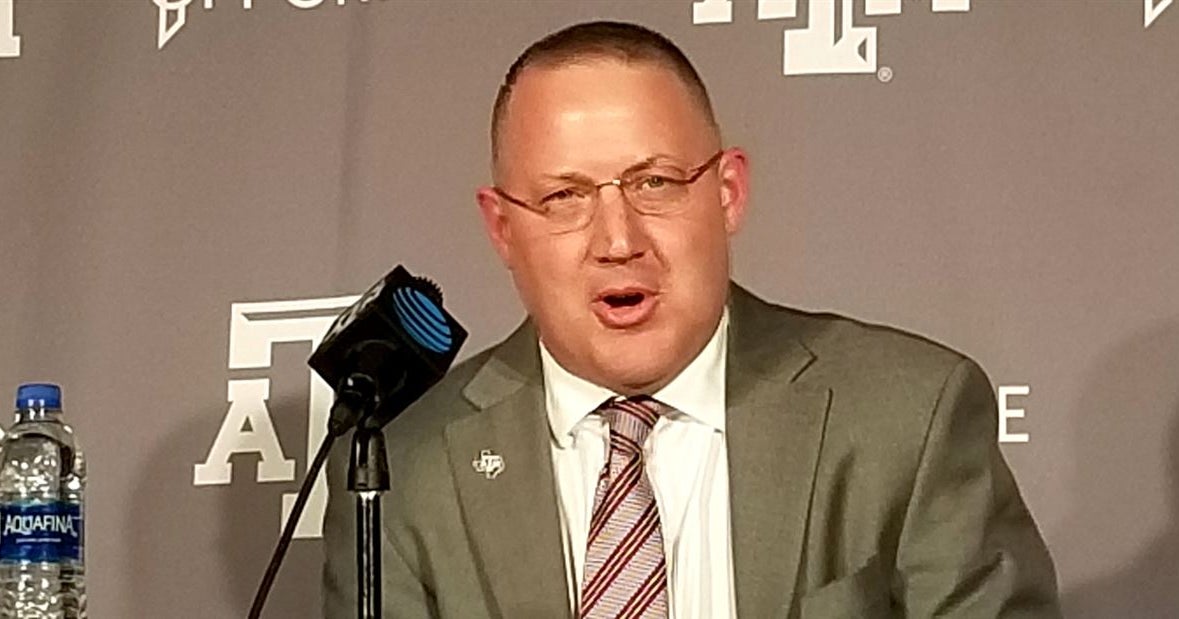 It was an emotional first night for new head coach Buzz Williams coaching his first game in Reed Arena as the Aggies honored Hall of Fame head coach Lewis Orr before the game. Williams discussed his relationship with Orr and where A&M stands after an 81-74 over Kingsville on Friday night in its final tune-up before the regular season opener.

Q: How much stock do you put into an exhibition, what’s kind of your philosophy on how you take what you learned today and knowing you are working on your rotation and working on getting guys in there?

A: “It’s the first exhibition game I’ve played as a head coach. I’ve never done it. I did this one because of Coach [Johnny Estelle] and my relationship with him. In hindsight, it was for sure the right decision, regardless of Coach. We needed to play with the lights on. We needed to play with some people in the stands. I think there’s a lot to learn from it. We have a long way to go in regards to all of the things that you mentioned. In some ways, I’m very encouraged. In some ways, what I thought came true. Which will allow us to teach with even more impact. But yeah, it was the first exhibition game I’ve ever played. I think we needed reps, not only of what you saw on the floor. I think we needed reps of halftime and pregame. Like, I wasn’t sure where I was supposed to take a shower, or where I was supposed to get dressed. I know that doesn’t matter, but if you’re weird like me it matters a lot. So we needed that rep.”

Q: How much of an idea do you feel like you have with your rotation or how open is it still coming off what you saw tonight?

A: “We scrimmaged Baylor on Sunday, and we did pretty well the first 20 minutes. And I thought we played pretty well the first 20 minutes here. And then we talked about that at halftime. Can we be better as we begin the second half tonight in comparison to the second half from Sunday. And it was the exact same scenario. I think what we got to figure out is regardless of who plays, who can play and help us get a shot as opposed to a turnover. And the issue is that we had six guys out of the 10 that played that had a minimum of three turnovers. Well you have to play five guys, and so we got to figure out the guys that cannot turn the ball over.”

Q: On performance of Quenton Jackson

Q: I know we saw the results of the stats and the score, how comfortable do you feel like your players are getting into the offense, getting through the offense, just grasping the offense?

A: “I think our guys have been phenomenal in regard to what we are asking. I think they have been superb in trying to absorb the teaching. I think going into game No. 1, I think they’re aware of what we’re asking, and they know when it’s not right. What we’ve got to get past is when it’s not right, how can we execute even though it’s not right. When he [Estelle] called zone, when they were in a zone press, zone in the half court, in our kids mind, ‘hey now something’s not right’, I know but we still have to play and I think that’s the next step that we have to take. I don’t know how long it will be being aware I think is the first step and that’s encouraging and now we have to find out who can execute while being aware of what’s going on.”

Q: I know you had three guys not dressed besides Nebo, also not dressed out, are any of those long-term injuries?

A: “Zach [Walker] did something to his foot, [Josh] Nebo hasn’t practiced yet, Bakari [Simmons] practiced the first three days so I don’t know.”

Q: Getting to come together, have the pregame stuff, have Coach [Lewis] Orr what did that mean to you all?

A: “I’m old, I’m not as old as coach but I was flooded with emotion all week, flooded with emotion of junior college manager to head coach at Texas A&M, and I don’t mean any of it egotistically, flooded that the women are playing OCU, which is where I was a manager. Overwhelmed that we are playing Northwestern State on Wednesday, I left Kingsville to go to Northwestern State, coach Mack hired me there. It has nothing to do with me, obviously it was authored by someone bigger than me and so just all that Johnny said he was a GA when I was an assistant at Kingsville, I should not have been hired at Kingsville because I did not have a master’s degree. The president at Kingsville Ok’d it for me to get the job, to teach classes without a master’s degree and then Johnny works for coach for nine years, Johnny became the head coach at Navarro 15 days after I became the head coach at Marquette. Coach has been with us in some capacity. Last Nov. 3 so 367 days ago we named the court after coach at Navarro. It’s deja vu, it’s all the lessons, it’s all of the situations replaying in my mind, it’s driving double digit hours with him to recruit, it’s driving the van double digit hours to go play a game to eating McDonalds postgame. I met my wife in Kingsville, I quit a Division 1 job to go to Kingsville and had to get permission, it was because I thought I was going to be a JUCO coach and I knew I had to get my master’s degree and never been in Reed Arena when I was the head coach and thinking about my two years here and all of that comes across egotistical and I mean none of it in that fashion at all, just overwhelmed with gratefulness and overwhelmed with humility and then playing an exhibition game with all of that going on I wasn’t very good, I turned the ball over a lot mentally too.”