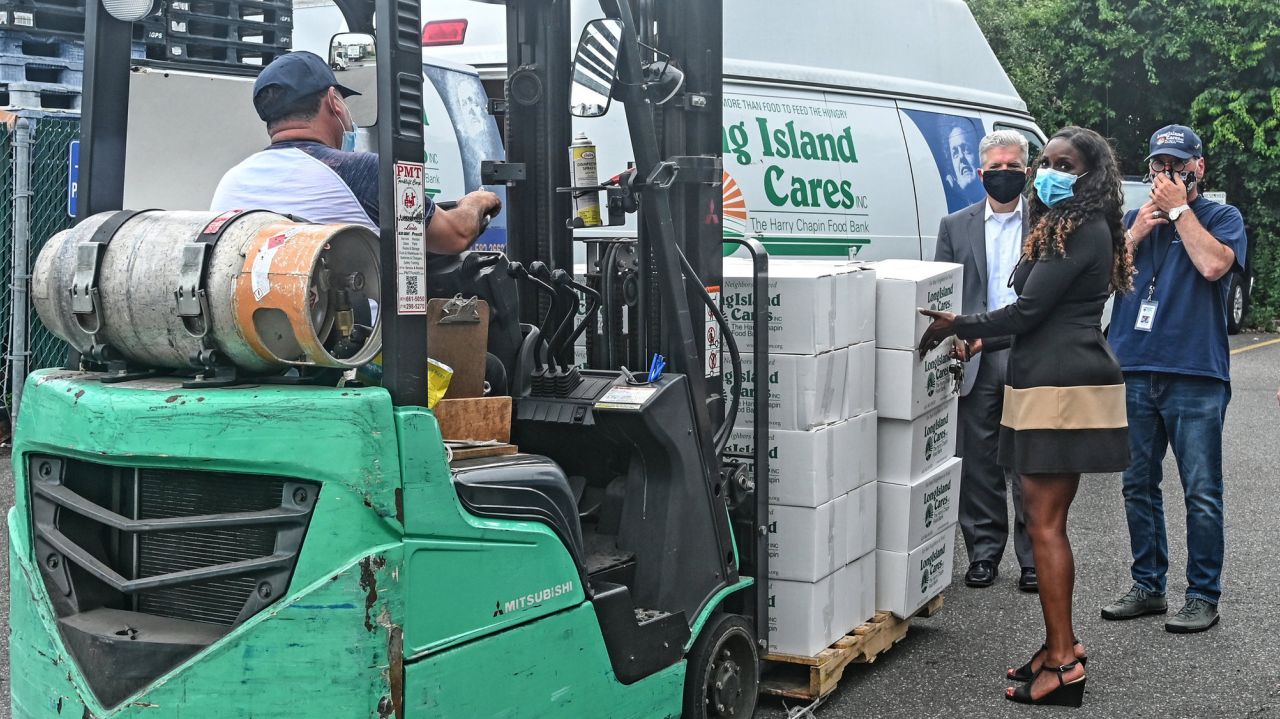 
A new Suffolk County program is helping bring food to those who cannot leave their homes.

The Suffolk Cares program uses the county’s 311 line to assist residents who are in immediate need of food but don’t have access to a local food pantry. After an assessment is done by a 311 operator, a box containing several days’ worth of nonperishable food — such as pasta, sauce, fruit cups and canned tuna and chicken — from the nonprofit Long Island Cares is delivered within 24 to 30 hours.

The county runs the program through eight of Suffolk’s 10 towns, which have been given a supply of the boxes. A designated town employee is contacted when a 311 call from a resident comes in and then provides contactless delivery of the box. Shelter Island is not part of the program, and due to high demand, Islip Town opted to have Hauppauge-based Long Island Cares deliver the boxes to its residents, said Vanessa Baird-Streeter, Suffolk’s deputy county executive for community recovery.

“Our 311 operators are armed with information about food banks and pantries, delivery services, pop-up food distributions,” Baird-Streeter said. “But for people who do not have access to transportation and have limited financial resources, how do they access food?”

The program took shape at the grassroots level at the start of the COVID-19 pandemic after community advocates noticed a marked increase in food insecurity. Minerva Perez, executive director of the Sagaponack-based nonprofit Organización Latino-Americana of Eastern Long Island, or OLA, said her organization began receiving calls from as far west as Wyandanch and Lindenhurst. Using volunteers to shop or drive people to food pantries became unsustainable and unsafe during the pandemic, she said.

Perez said she worked on a plan for an emergency food hotline and approached the county, but weeks went by and the calls for food were growing. That’s when she joined forces with Abena Asare, an associate professor of Modern African Affairs & History at Stony Brook University, who set up an online petition for a county food hotline that garnered more than 5,000 signatures in a week.

Baird-Streeter said the county’s 311 line also was seeing an increase in food insecurity calls, but instead of creating a food hotline the county opted to use the 311 line because operators can assist callers with additional help, such as home energy programs.

“There are just so many more resources available if you’re calling the 311 call center,” she said.

Get the latest breaking news as it happens.

Suffolk Cares launched on June 9 and so far 95 boxes have been delivered, according to Long Island Cares. Baird-Streeter said that people are sometimes so desperate for food that either she or a member of her staff has had to make an emergency delivery. One woman only had water left, she added.

“We’re finding that the majority of individuals have a temporary disability, so they might have hurt their knee and they can’t get to a food pantry, or some people just don’t have transportation,” she said. While local groups try to meet these needs, “we help to fill a particular hole in the process as it pertains to food insecurity and lack of transportation.”

“We needed a system and it’s been a great coming together of OLA, Abena and the county,” she said, noting that food needs are decreasing as infection rates drop. “But if it gets rough again, we’ve got a county and towns who are willing to work together to make sure that nobody is homebound and hungry.”

Assistance that Hauppauge-based Long Island Cares has provided to Long Islanders from March to May:

Denise Bonilla has worked at Newsday since 2003 and covers the Town of Babylon, including the villages of Lindenhurst and Amityville.