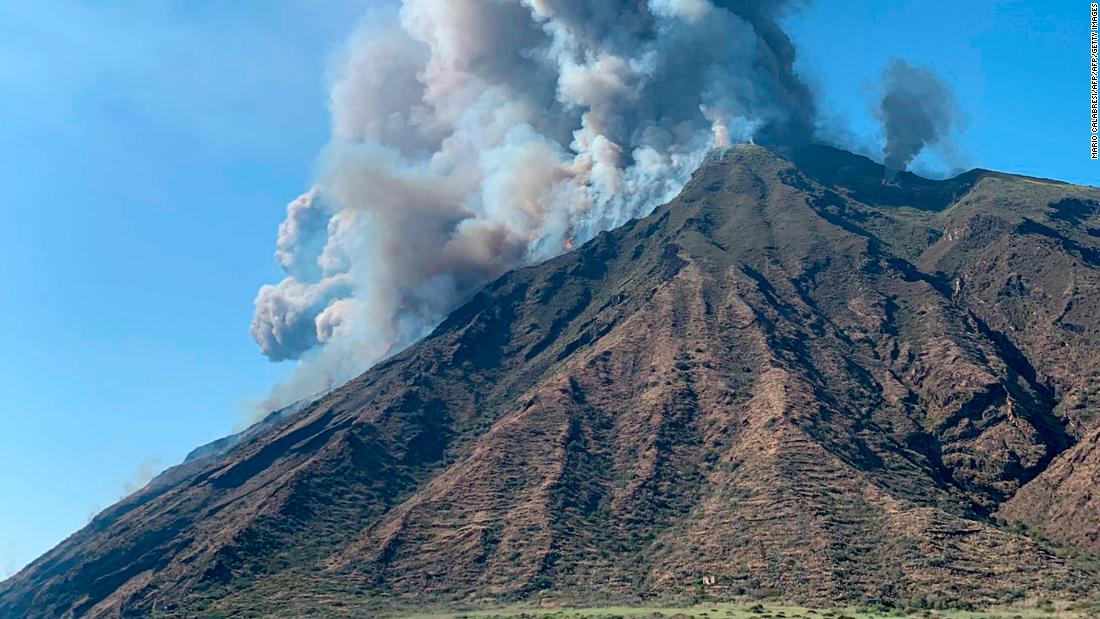 Firefighters were deployed to extinguish fires started by the eruption, and a helicopter was dispatched to rescue hikers who signaled distress, according to the Italian fire and rescue service, Vigili del Fuoco. Fire service spokesman Luca Cari said fire brigade teams recovered the body of one hiker.

The two primary eruptions occurred around 4:46 p.m., local time, on the island, which is located in Tyrrhenian Sea, off the western coast of Italy, the National Institute of Geophysics and Volcanology reported. Those eruptions were preceded by lava spills about two minutes prior.

“The analysis of the data of the seismic network made it possible to identify, in addition to the major explosions, about 20 minor explosive events,” according to the institute.

The initial explosion was the largest since at least 2007, Boris Benhcke, a volcanologist with the institute, posted on Twitter.

A ‘fountain of stones’

Cristiano Demurtas, who was working with an ecological theater festival on the island that wrapped this week, told CNN he witnessed a brief eruption.

He and several colleagues were on the terrace of their villa when he heard what sounded like the whirring sound of a helicopter, Demurtas told CNN in a phone interview from the villa in Stromboli.

He said he saw a “fountain of stones, but it was like one second, or maybe two seconds.”

Demurtas said he heard the “biggest sound I ever, ever heard in my life, something strange.” The sound paralyzed them for a few seconds, he said.

“There was this smoke and material, just going up, and up and up,” said Demurtas, a theater director who lives in London,

Alessandro Fabrizi, the theater festival’s artistic director, said he was returning to Stromboli from Sicily on a hydrofoil when he “saw the mountain burning.”

He later learned about the eruptions, he said in an interview from Stromboli.

Fabrizi said he saw “a lot of smoke coming out the volcano, hanging around the mountain.”

He saw the Department of Civil Protection gather people in the village’s main square for their protection for about an hour.

“We can still see the fire on the mountain,” said Fabrizi, who is from Rome. “The mountain is burning but it doesn’t look it’s going to come to the village, soon at least.”

‘The lighthouse of the Mediterranean’

Social media pictures show Stromboli engulfed in a huge plume of smoke, visible from other islands kilometers away.

Stromboli is one of the eight Aeolian Islands, a volcanic arc north of Sicily and a popular tourist destination. Stromboli has been in a near-continuous eruptive phase for decades.

The volcano is known as “the lighthouse of the Mediterranean” because of its frequent, bright eruptions at night. Wednesday’s eruptions are considerably more severe than normal.