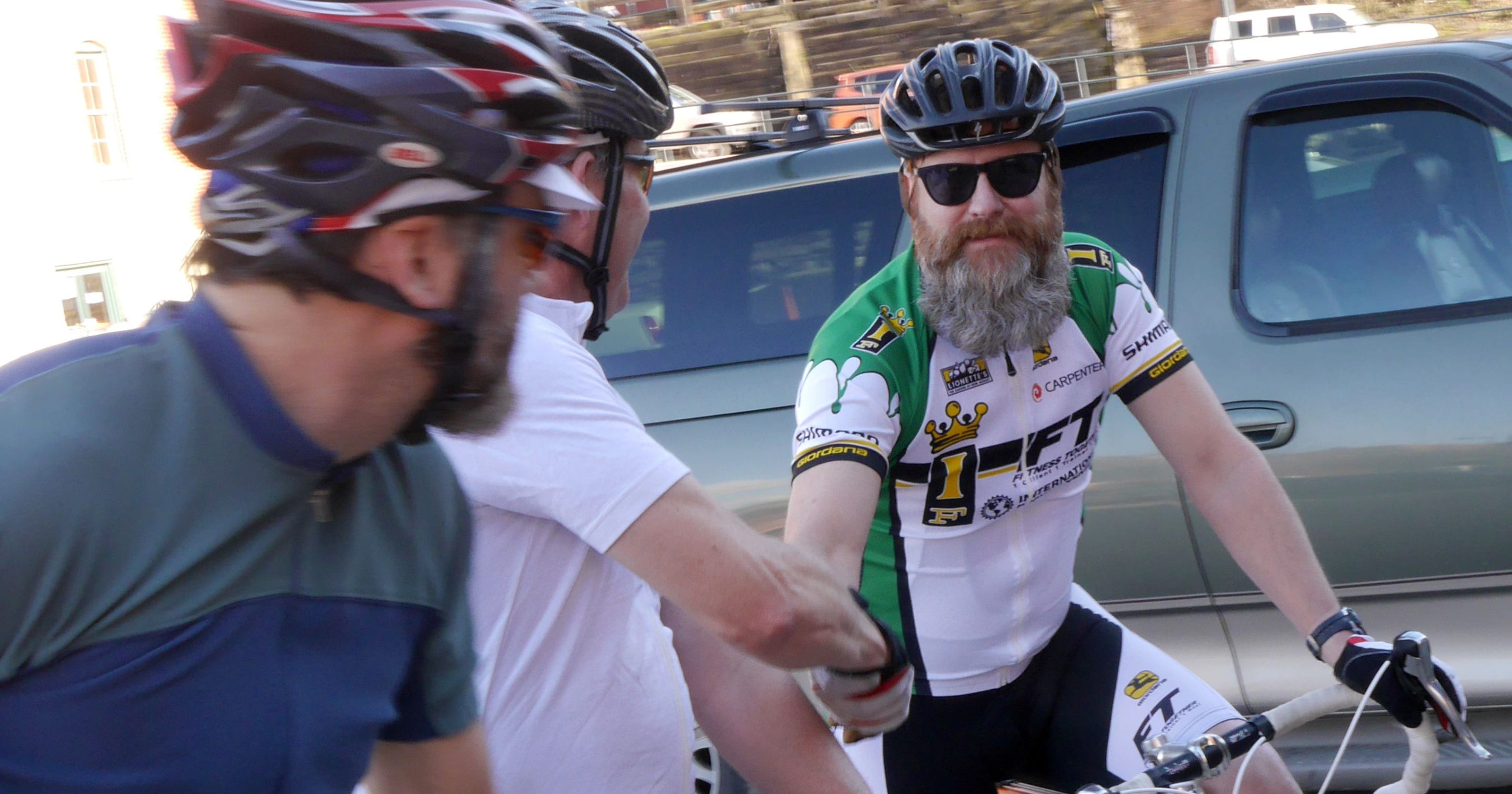 Mark Russell greets other riders behind Black Dog Bikes where the weekly Tuesday night ride from leaves for about a 25 mile loop out of Staunton Tuesday, March 15, 2016 (Photo: Randall K. Wolf/The News Leader)

Black Dog Bikes will have a new home come next spring, according to owner James Burris. The bicycle shop opened in 2005 and is currently located at 121 S. Lewis St. in Staunton.

Burris has been leasing that spot for nearly 15 years and said it was time for a place of his own.

He said he purchased the building at 608 N. Augusta Street and has a lot of renovations to do. It’s the building between the City of Staunton Fire Department and Hershey Tire. A faded sign above the building’s door currently reads “Dave’s Carpet.”

The set up of the shop will be somewhat similar to what he currently has at his Lewis Street location. There will be a work space for bikes, retails space and more bicycles in the basement, Burris said.

Want to read more stories by The News Leader? Click here to get a subscription.

Burris said he’s been seeing a vested interest in the community for a bike shop. His customer base has grown to neighboring towns and cities.

Burris got his taste of cycling during college, while he was doing a lot of whitewater kayaking. But when the rivers were running low, he needed something else to fill his free time.

“All the guys I kayaked with would mountain bike when the rivers weren’t running, so I started riding with them,” he said.

He then worked in a bicycle shop in college. When he moved to Staunton, he saw there wasn’t a shop, so he opened one up.

The Shenandoah Valley is a great place for both mountain cyclists and road cyclists, he said.

“It’s really both because we have such great place to ride,” he said.

The shop is also more than a place to buy bikes, it’s also the hub of the cycling community. Burris said they hold weekly bike rides on Tuesdays and Thursday when the weather is nice.

For more information go to BlackDogBikes.com.

The Shops at the Old Shed has a number of booths that customers can pick through to find hidden treasures, along with a wide range of items to choose from.

Angela May and her father Harold Ludholtz opened Shops at The Old Shed about two months ago. It’s a 9,000 square foot antique mall with an eclectic mix of items.

Ludholtz had previously been selling his wares at the Verona Antique Mall, but wanted to do something a little more full-time. Even though he’s retired, he wanted something to do, he said. His son-in-law now runs his used car shop H&L Auto Sales in Mount Crawford and Ludholtz started selling antiques with his wife, Linda, about five years ago.

“I needed another adventure,” he said.

“It gives him something to do and then they were able you know to move their booths and have them here so they save money,” May said.

The two have called the Shenandoah Valley their home for most of their lives — Ludholtz lives in Mount Crawford and May in Weyers Cave.

He brought on his daughter, May, to help run the business side of it. May runs her own residential cleaning business called Home Sweet Home but wanted to help support her dad, so she said yes. She said that much of the family helps out every Saturday.

Ludholtz said lots of people are downsizing and looking to sell off a lot of their things. They also offer six month leases for those who want to try selling their wares in a booth.

“That way we can figure if someone would want to stay or not,” he said.

May and Ludholtz also want the antique mall to be a place for the community. They hope to hold community events and monthly fundraisers for various community organizations. They are currently raising money for childhood cancer research.

May said she’s been impressed with what people have been bringing in to sell and how fast things are selling. Since there’s such a range of items — from antiques to primitive ware and also plenty of handmade goods and an entire booth dedicated to equine goods — it’s also bringing in a range of people.

“We are very pleased,” she said.

Also, the location is perfect, they said. They’re right down from Valley Pike Farm Market and Rocky’s Gold, Silver and Antiques.

“With being right off the interstate is good and then having you know the new farmers market down there and Rocky’s is a good,” May said.

For more information visit the Shops at The Old Shed on Facebook or at its location at 3236 Lee Highway in Weyers Cave.

More: Have you seen the new mural in Waynesboro? It’s huge. We talked to the artist about it.

Have a news tip?

You can reach reporter Laura Peters at [email protected]. Follow her @peterslaura.