Stanley Cup Playoffs Buzz: What we learned in Bruins-Hurricanes Game 4 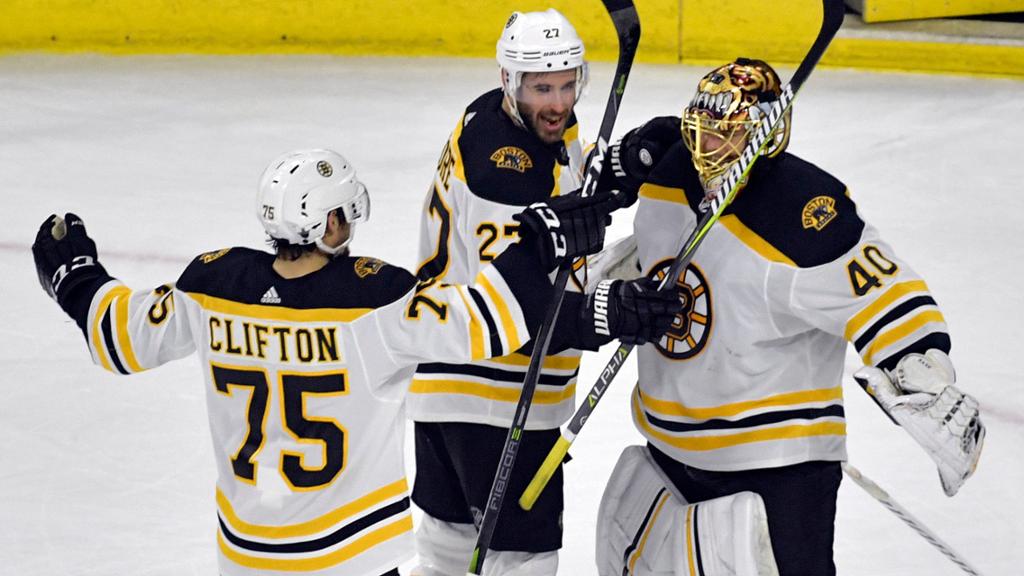 Stanley Cup Playoffs Buzz: What we learned in Bruins-Hurricanes Game 4

Welcome to the Stanley Cup Playoffs Buzz, a daily in-depth look at the 2019 NHL playoffs. The Boston Bruins advanced to the Stanley Cup Final with a 4-0 victory against the Carolina Hurricanes in Game 4 of the Eastern Conference Final on Thursday to complete a four-game sweep of the best-of-7 series.

Here are some takeaways from Game 4 of the Eastern Conference Final:

Unhappy with how the top line had been playing, Bruins assistants Jay Pandolfo and Joe Sacco met with forwards Patrice Bergeron, Brad Marchand and David Pastrnak prior to practice Wednesday to go over some video in an attempt to get them back in sync. Bergeron, Marchand and Pastrnak spent too much time defending in Game 3. They hadn’t yet been dangerous at 5-on-5 in the series. So, Boston’s coaches felt a refresh was in order. It clearly worked. The linemates combined for eight points, including all four goals in Game 4. Bergeron and Pastrnak scored on the power play, but the success there was a byproduct of their dominance at even strength. They were in control of the puck and playing in the offensive zone all night. They combined for 11 shots on goal and 26 shot attempts, including 11 each for Bergeron and Marchand.

No Chara, no problem for Bruins

Depth has driven the Bruins’ success this postseason and it was on display again in Game 4. Zdeno Chara, Boston’s captain and top-pair left-handed defenseman, did not play because of an undisclosed injury. Enter John Moore, who had missed nine straight games since playing in Game 7 against the Toronto Maple Leafs in the first round. Moore gave the Bruins 11:48 of nearly flawless ice time, including 1:32 shorthanded. Matt Grzelcyk, normally the lefty on the third pair, bumped up to take Chara’s spot on the first pair with Charlie McAvoy and looked like he belonged. He played 16:10 and blocked two shots. Torey Krug (27:00) and Brandon Carlo (23:28), the Bruins’ second defense pair, were first and second, respectively, in ice time. Carlo played a team-high 2:49 shorthanded. Up front, Noel Acciari was back in the lineup to replace injured forward Chris Wagner. Acciari, who did not play the previous five games, was third among forwards in ice time (18:14) and went 4-1 on face-offs.

Video: Discussing the impressive moments this series for BOS

Hurricanes need to learn from this

The Hurricanes made great strides this season and exceeded expectations by reaching the conference final after missing the playoffs for nine straight seasons. But the way they were swept by the Bruins served as a lesson their young players must learn from if they are going to take the next step next season. Boston dominated on special teams, outscoring Carolina 7-1 on the power play in the series. The Bruins also had a big advantage in depth with 12 players scoring goals compared to five for the Hurricanes, who were never able to establish their forecheck and had trouble simply getting shots to the net by the end of Game 4.

The crowd of 19,041 giving the Hurricanes a standing ovation over the final 90 seconds of the game Thursday demonstrated the impact the players have made this season in this market. Carolina exceeded PNC Arena’s listed capacity for hockey of 18,680 in each of its seven home games during the postseason and averaged 19,038 per game. That was a significant improvement from the average attendance of 12,842 in the Hurricanes first 18 regular-season home games and a reminder of the fan support they received during their playoff glory days when they reached the Stanley Cup Final in 2002, won the Stanley Cup 2006 and reached the conference final in 2009.

— A memorable season for the Hurricanes came to a disappointing end, writes Tom Gulitti

— Even without captain Zdeno Chara, the Bruins defense was stellar in Game 4, writes Shawn P. Roarke

– The Bruins won the Prince of Wales Trophy, but didn’t touch it, writes Dan Rosen

– The Bruins will play either the San Jose Sharks or St. Louis Blues in the Cup Final, writes David Satriano.

San Jose Sharks at St. Louis Blues (8 p.m. ET; NBCSN, SN, CBC, TVAS): The Sharks, who lead the best-of-7 series 2-1, are looking to win consecutive games in a series for the first time since the first round against the Vegas Golden Knights and move within one win of the Stanley Cup Final. The Blues said they put their 5-4 overtime loss in Game 3 behind them, and look to even the series at home, where they are 3-5 during the postseason.

— Adversity is nothing new to the Blues, who overcame an awful start to the regular season to reach the playoffs. So, trailing 2-1 to the Sharks should not be that daunting of a task, writes Mike Zeisberger.

— Logan Couture leads the playoffs in scoring with 14 goals, but there is only one prize the Sharks forward has his eyes on, writes Tracey Myers.

— The Sharks are hoping to get on a roll that will carry them into the Cup Final, writes Tim Campbell.

— The Blues could be without defenseman Vince Dunn for Game 4, writes Louie Korac.

— Vladimir Tarasenko is heating up at the right time for the Blues, writes Tracey Myers.