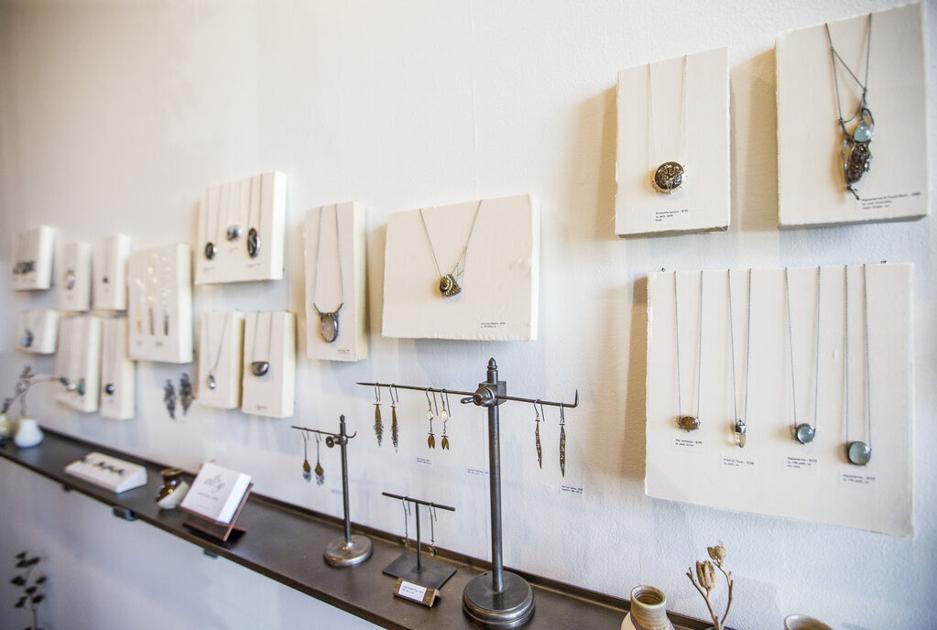 A few months into the shutdown caused by the coronavirus pandemic, Laurel Karnecki made a necessary leap.

Karnecki, a local custom jeweler, was used to working from home and primarily sold her finer necklaces, earrings and rings online, while also attending art shows around the country. But after events were canceled this summer, Karnecki says, her motivation began to wane.

“Shows were always good motivation — prepping for shows and doing displays for shows was always my driving force,” Karnecki said. “The online sales were good but it was the presentation and the people and communication with people that really motivates me to work. I think that selling a piece to a person and seeing that person’s reaction, takes the whole process full circle. Without that, I wasn’t feeling it.”

So, on a self-described whim, Karnecki made the necessary steps to remedy that.

Karnecki opened Alloy, a jewelry studio and art gallery in downtown South Bend. The new brick-and-mortar location is in the Emporium building where local retail stores such as Cambria Boutique and Luxe Wagon were once located.

Inside the small space, simplistic and unique necklace pendants are displayed on the walls, while stacking rings and earrings are placed on shelving and more expensive pieces are inside display cases. The large windows that look onto Niles Avenue allow for a flood of natural light, which bounces off the semi-precious gems used in each piece.

Karnecki, who began her jewelry line called Laurel’s Bench in 2004, describes her style as “natural” and “simple, but interesting.” Nearly all of the necklaces feature a signature “path setting” where a thin chain loops underneath the stone.

A portion of the business Karnecki hopes to tap into is offering alternative bridal options, utilizing other colored gems and stones outside the typical clear diamond option. She also offers personalized custom jewelry options for those seeking a personal touch.

“One of my favorite parts of the job is finding interesting stones,” Karnecki said. “I like the idea of using the uncut and raw crystals, ‘cause those have more character, but initially when I started in jewelry and over the years, I worked with a lot of fossils and semiprecious stones and I am always looking for something different. I don’t want to make jewelry that looks like everyone else’s.”

But Alloy is not only about jewelry.

Karnecki has tapped into a national network of artists who also traveled to shows and fairs across the nation and she wanted to create a gallery for their work. Currently, small wooden and stone vases and mixed media art are also displayed around the store from artists around the country.

“I want this to be primarily jewelry, but I also want it to be an art gallery,” she said. “Plus, Alloy is the blending of two things to make them stronger and more beautiful.”

Target and Ulta Beauty on Tuesday announced plans to open makeup and skincare shops inside Target stores across the country.

According to a news release, scaled down Ulta shops will begin opening inside 100 Target stores beginning in late 2021, with more to be added as time progresses. Exact Target locations for the new shops were not given. There are currently two Targets in the area, one at 155 E. University Drive in Mishawaka and the other at 1400 E. Ireland Road in South Bend. It was also not clear the impact this may have on the Ulta Beauty store at 5628 Grape Road in Mishawaka, which relocated from University Park Mall in 2018.

With the new partnership, Ulta Beauty products will also be available on Target’s website, as well as being available for curbside pickup and delivery.

The partnership will be similar to the one between JC Penney and Sephora, which began operating shops inside the department stores in 2009.

Workmans Warehouse in Elkhart has recently moved, and the new location is double the size of the former one. The local retail store is now open at 1521 S. Nappanee St., which formerly held Quality Glass. The retail store offers durable and warm workforce clothing such as boots, Carhart jackets and more and will be celebrating a grand opening on Nov. 21 from 9 a.m. to 4 p.m. with giveaways. … Two Which Wich restaurants have opened. The fast-casual sandwich restaurants are attached to gas stations — one on Prairie Avenue across from Four Winds Casino and one near the corner of Douglas Road and Indiana 23. …Thanksgiving is coming up so I am compiling a list of local restaurants offering dine-in and carryout services for the holiday. If you own or know of a business or group that is offering Thanksgiving dinner options this year, please email me at [email protected] to be included on the list.