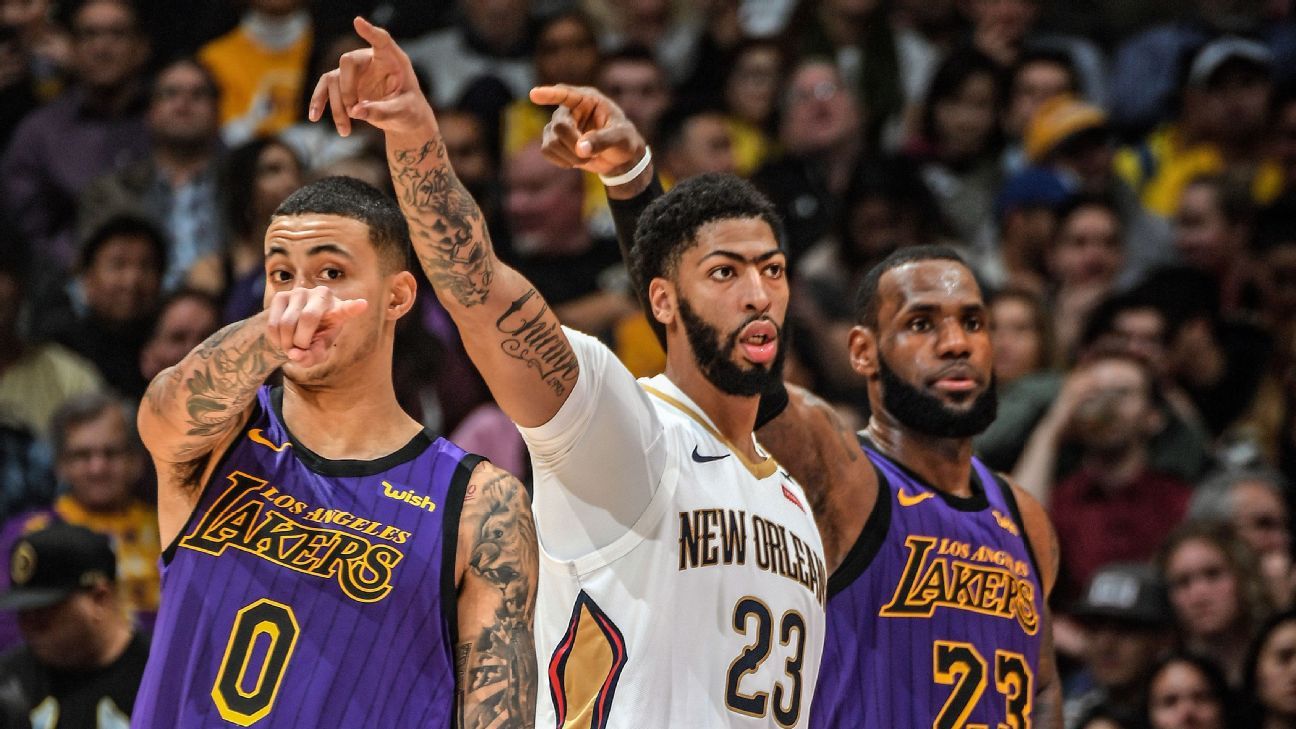 The Lakers paid a steep price to partner Davis with LeBron James: sending Lonzo Ball, Brandon Ingram, Josh Hart and the picks — including the No. 4 overall selection in Thursday’s NBA draft — to the Pelicans, sources said. The Lakers were able to hold on to forward Kyle Kuzma in the trade, which cannot be finalized until July 6.

New Orleans’ trade package from the Lakers represents one of the most substantial returns on a single star player in modern league history.

Davis, who had requested a trade to L.A. in January, joins James in Los Angeles to create one of the most powerful duos in the NBA. Davis has long indicated privately that he plans to sign a new contract with the Lakers once he becomes eligible for free agency in 2020, sources said.

The Pelicans’ return for Davis was substantial and perhaps even more impressive given that the market had shrunk on New Orleans, based upon rival teams believing he would ultimately become just a one-year rental before leaving for the Lakers next summer.

The Boston Celtics had resisted including Jayson Tatum in a trade package, and that ultimately made the Lakers the clear-cut choice to strike a deal, league sources said.

The Pelicans now will have two of the top four picks in Thursday’s draft — No. 1 and No. 4. New Orleans will select Zion Williamson at No. 1 and now has the flexibility to select a player at No. 4 — or trade it at auction in the next several days.

New Orleans has had significant interest in talks with teams in recent days on the fourth overall pick, and those talks are expected to continue over the next several days, sources said. Teams are pursuing point guards Darius Garland and Coby White high in the lottery, giving New Orleans a chance for an even bigger haul from the deal.

In addition, the language in the deal concerning the future first-round picks includes the possibility of a pick swap that could make the trade even more advantageous to the Pelicans, league sources said.

NBA Front Office Insider Bobby Marks says the Lakers will be able to afford a max contract player, depending on the day they finalize the Anthony Davis trade.

Ingram and Ball were the key players in the trade for the Pelicans, who imagine them in a starting lineup with Williamson and Jrue Holiday. Ingram has been recovering from a blood clot in his right shoulder that ended his season prematurely. He is expected to be back on the court in July — and ready for training camp in the fall, sources said.

2: Of the top three players all time in player efficiency rating now will be on Lakers (LeBron 27.6; Davis 27.4)
5: Players under contract for Lakers next season once trade is official (LeBron, Davis, Moritz Wagner, Kyle Kuzma, Isaac Bonga)
6: Seasons Davis has averaged 20 ppg and 19 rpg (No other player has a streak longer than three)
7: Former No. 1 picks who now will play alongside LeBron James (Davis, Kyrie Irving, Derrick Rose, Greg Oden, Andrew Bogut, Joe Smith and Shaquille O’Neal)
7: Players who have averaged 25 ppg and 10 rpg, then changed teams in the offseason (Davis, DeMarcus Cousins, Kevin Love, Shaq, Moses Malone, Kareem Abdul-Jabbar, Elvin Hayes)
25-1: Lakers’ title odds on May 15, per Caesars Sportsbook. Those odds are now down to 7-2
99: 30-point, 10-rebound games for Davis since entering the league in 2012-13. That’s 25 more than the next closest player (Russell Westbrook)

If both sides agree to push back the trade call until July 30, Los Angeles will have $32.5 million in room to use in free agency.

By waiting, Los Angeles would be acting like a team over the cap and would be allowed to use the fourth pick in the draft as salary. If the trade is finalized on July 6, that number will shrink to $27.8 million.

Davis also has a 15 percent trade bonus worth $4 million that would see the Lakers’ cap space shrink to $23.8 million if the trade is completed in the first week of July. Davis will have the right to void the bonus.

Like the Lakers, New Orleans could also benefit by waiting to complete the trade.

The Pelicans would see their cap space increase from $15 million to $19 million.