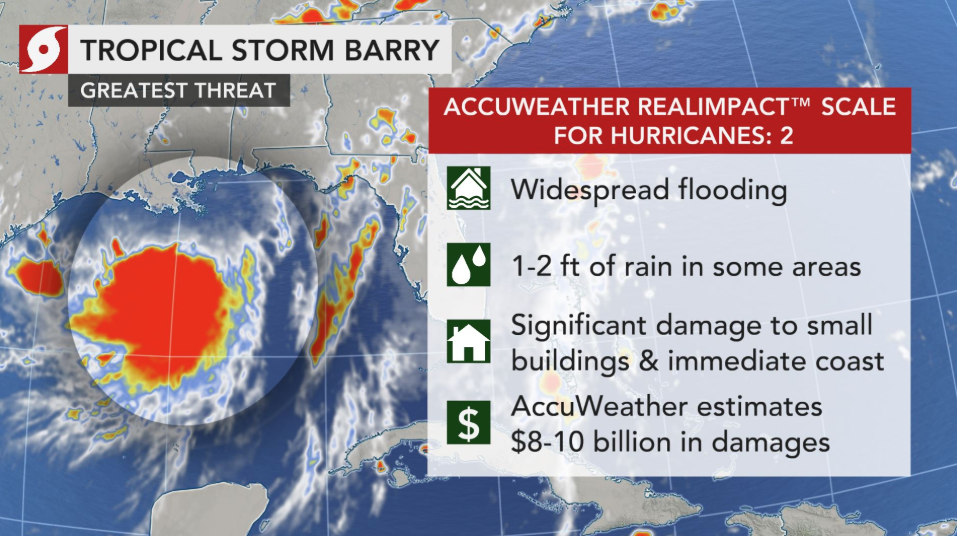 As night fell on the Gulf Coast Friday, Tropical Storm Barry was inching closer toward the Louisiana coastline with 65-mph winds. Barry will be the first tropical system of 2019 to make landfall in the U.S.

Some portions of Louisiana were already experiencing flooding as early as Friday afternoon, according to AccuWeather Extreme Meteorologist Reed Timmer, who was stationed near Chauvin, Louisiana, about an hour south of New Orleans.

Additional strengthening of Barry is forecast prior to landfall Saturday morning. If maximum sustained winds of 74 mph or greater are detected, the storm will be classified as a hurricane.

AccuWeather meteorologists believe that Barry will make landfall as a Category 1 hurricane along the central Louisiana coast.

In New Orleans, neither mandatory nor voluntary evacuations have been ordered, as the city’s mayor, Latoya Cantrell, advised residents to shelter in place. Cantrell said the city only enacts evacuations for hurricanes of Category 3 force or higher, according to the Saffir-Simpson Scale. “Therefore, sheltering in place is our strategy,” the mayor told reporters at a news conference on Thursday.

If Barry maintains the track it’s currently on, the storm could make landfall on or just west of Marsh Island, Louisiana, in Vermilion Bay, about 100 miles west of New Orleans.

“The key to whether Barry becomes a hurricane before landfall or not will depend on the amount of time it is able to spend over the warm water of the Gulf of Mexico,” AccuWeather Hurricane Expert Dan Kottlowski said.

Slow forward movement over the Gulf of Mexico on Friday night could allow the storm to reach Category 1 hurricane status just prior to landfall.

However, the main threat from Barry will not be whether or not it is a hurricane at landfall, but rather how much rain is unleashed. Rainfall of 2-4 inches per hour can occur with Barry as it begins to move onshore. Rainfall totals will average 10-18 inches with an AccuWeather Local StormMax™ of 24 inches possible in some places.

In terms of impact, AccuWeather has designated Barry a level 2 storm on its RealImpact™ Scale for Hurricanes. The scale ranges from “Less than 1” to a 5, with 5 having the most severe impact.

“Our greatest concern is for torrential rain that would result in life-threatening flooding,” Kottlowski said.

“Heavy, flooding rainfall is expected over a large area, especially over much of eastern Louisiana into parts of western and southern Mississippi and southeastern Arkansas.”

“This is going to be a significant weather event,” Louisiana Governor John Bel Edwards cautioned in a post on Twitter. It is critical that you monitor updates and heed the advice of local authorities.” Edwards also announced that he’d authorized the Louisiana National Guard to activate up to 3,000 personnel to assist with Barry-related emergencies.

Edwards also implored residents to not attempt to drive on flooded streets and roads. Streets, highways and low-lying areas will be the first to take on water as torrential rain pours down. However, flooding will progress and expand as the storm moves slowly inland.

President Trump on Thursday night in a tweet told Americans FEMA is working closely with state and local officials to prepare for the aftermath and urged residents to “heed the directions of FEMA, State [and] Local Officials.” He added, “Please be prepared, be careful, [and] be SAFE!” as the storm continued gathering strength.

Significant rises on the secondary rivers in the region are likely with the risk of major river flooding including the Pearl, Black, Tickfaw, Comite, Amite and Tchefuncte.

Some secondary rivers, such as the Atchafalaya, generally do not contribute to the flow on the Mississippi in the delta region, but rather take water away from the main stem.

However, as heavy rain falls immediately over the lower part of the main stem of the Mississippi, a rise of a few feet can occur on that waterway. This will be especially true days later over the middle portion of the river, where larger tributaries gather rainfall.

Some rise in water is likely along much of the upper Gulf coast, especially along the central and northeastern Gulf coast.

“AccuWeather meteorologists expect a maximum storm surge of 3-6 feet mostly along and just to the right of the storm’s path,” Kottlowski said.

Dangerous seas, rip currents to threaten areas hundreds of miles away from Barry

Where will Barry’s rain head after this weekend?

Why you should evacuate ahead of a hurricane

5 expert tips for protecting your home against hurricane damage

The greatest storm surge will impact most of the central and southeastern coastal areas of Louisiana.

As of midday Friday, the tide station at Shell Beach, Louisiana, reported a storm surge of 3 feet. Levels have been ranging from 2-4 feet above normal tide.

Storm surge much higher now on Island Road in TerreBONNE Parish as the tide is now working in concert with wind. Water likely 3-4 feet deep just south down this road. Time is 10:00 pm @breakingweather @accuweather pic.twitter.com/GPZ815NtCc

Water levels on the lower Mississippi River remain high from spring flooding that was still flowing downstream from the middle and upper part of the basin.

In comparison, the level on the Mississippi River prior to the arrival of Hurricane Katrina was 2 feet. On Thursday morning, the river level was just above 16 feet. Flooding in New Orleans occurred primarily as levees failed as a storm surge caused waters to rise in Lake Pontchartrain.

The circulation around Barry was already causing some water to back up near the mouth of the Mississippi River on Friday.

Levees in New Orleans are between 20 and 25 feet high at different points along the river, according to what Ricky Boyett, the spokesman for the Army Corps of Engineers in the New Orleans District, told The New York Times.

J. David Rogers, the lead author of a definitive 2015 study on the canal wall failures and catastrophic flooding of New Orleans following Hurricane Katrina in 2005, told AccuWeather in an interview that new levees installed in 2011 will provide the city with much better protection from major flooding.

“It’s a much more robust defense system that they have today with probably a 100-fold better site characterization than they had going into Katrina,” Rogers said. “You can’t even compare pre-Katrina to post-Katrina; it’s like comparing a biplane to a 747.”

The storm will arrive after 6-10 inches of rain deluged New Orleans, which is below sea level, causing a flash flood emergency Wednesday. The pumps and elaborate drainage system could not keep up with rainfall rates of 2-3 inches per hour, resulting in serious street flooding and numerous high-water rescues.

Heavy rain that falls directly on the city poses the greatest threat for flooding in New Orleans.

People should not be lulled into confidence with the departure of the rain from earlier this week and the slow arrival of Barry’s heaviest rainfall. A tremendous amount of rain is still forecast for southeastern Louisiana, the bulk of that rain will occur during and after the center of the storm moves inland to the west.

With this storm, the amount of rain can overwhelm any city’s drainage system, let alone that of New Orleans.

While Barry is forecast to peak no higher than a strong tropical storm or low-end Category 1 hurricane, sustained, hurricane-force winds of 74 mph or greater will only be possible in a small area near and northeast of the center.

However, with this particular storm being rather larger, bands of severe thunderstorms with tropical storm-force winds of 39 mph or greater can occur well away from the center and especially so on the eastern side of the storm.

There is the ongoing potential for spin-up tornadoes and waterspouts up through a day or two after landfall in the region. Some of these may be wrapped in rain and difficult to see until they are already in the neighborhood.

Some of the oil and gas rigs in the Gulf of Mexico have been evacuated as a precaution, according to CNBC.

SEE ALSO: Why the upcoming heavy Gulf Coast rain could mean trouble around the US

Barry to track northward over Mississippi Valley after landfall

The latest indications are that the storm will push northward over the lower Mississippi Valley later this weekend and then the Ohio Valley toward the middle of next week.

While the magnitude of rainfall will gradually diminish as the storm moves farther away from the Gulf of Mexico, the risk of flooding will continue along the storm’s path.

Download the free AccuWeather app to stay alert to any tropical advisories, watches and warnings. Keep checking back for updates on AccuWeather.com and stay tuned to the AccuWeather Network on DirecTV, Frontier and Verizon Fios.