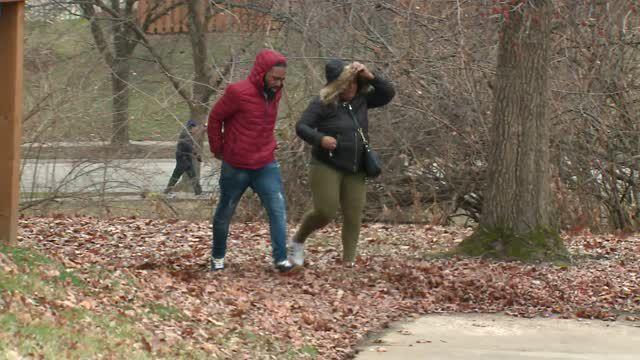 ST. LOUIS (KMOV.com) — Imagine living in a nice home without having to pay rent or a mortgage.

A St. Louis area mother and son are accused of doing just that; having allegedly operated a scheme targeting unsuspecting homeowners all over the St. Louis metropolitan area.

The court judgments against Barbarita Jimmerson and her son Jordan Harris are piling up. On a late December day in 2019, News 4 captured video of the pair moving out of a home on Mission Walk Court in Hazelwood.

An unidentified man attempted to block News 4 cameras by holding leaf bags and blankets in front of the camera.

Harris shouted, “Back off of me! Back off of me!” as News 4 attempted to question the pair about a long list of court-ordered evictions and judgments.

Coffman, the homeowner, told News 4 Harris showed interest in purchasing his home on Mission Walk Court during the summer of 2019.

“They present themselves really well,” he said of Harris and his mother. Harris “had a pre-approval from a legitimate lender,” but asked if he could take possession of the property prior to the sale closing.

Coffman drew up a temporary lease that would expire once the deal closed and accepted a $500 deposit for Harris and his mother to move into the property.

At first Coffman said there was no indication of deception. But he said the $500 deposit is the only payment he ever received.

As the months passed, Coffman lost thousands of dollars in unpaid rent while paying his own mortgage on the property, which he couldn’t access.

The sale on the home never materialized and Coffman says he was forced to take Harris to court to file a formal eviction, where Coffman was awarded possession of his property along with a judgement of $7,586.50.

So far, Coffman says he hasn’t seen any money from the judgement, and claims the duo lived rent-free in his home, which features granite counter tops and vaulted ceilings, from July 2019 through December 2019.

A review of court records determined Harris and Jimmerson aren’t strangers to court-ordered evictions. Between 2009 and 2019, Jimmerson and Harris were collectively sued for rent 16 times by landlords across the St. Louis region. Landlords have sued to regain possession of their properties from Brentwood to Lake St. Louis, and from St. Charles to Hazelwood.

In some calendar years, Harris and Jimmerson moved twice.

“I’ve been in the rental business for 30 years,” said Robert Lakowski. “This is the first time I’ve ever seen something so manipulative.”

Lakowski was victim number 13. He said while the pair lived in one of his properties rent-free, it cost him between $8,000 and $9,000. He finally evicted Harris and Jimmerson from his Brentwood condo in 2017, saying it was clear they had “no intention of paying.”

“I would describe them as people that have a system figured out,” Frye said.

His St. Charles home was recently remodeled with refinished hardwood floors when they moved in, and Frye said he was forced to evict them after they fell thousands of dollars behind in rent.

A local real estate agent, who wanted to remain anonymous, told News 4 Harris reached out about a property in Brentwood while he was being evicted from Coffman’s property.

The agent told News 4 Harris texted “Ok, do you know if we offered full price and didn’t ask for closing costs, would they do possession prior?” meaning if the duo made those concessions, would the seller allow them to move in before the closing date.

The agent did not proceed with the deal.

Another real estate agent in St. Charles County told News 4 the pair recently toured a property valued at more than $400,000 and provided a pre-approval letter showing authorization for $405,000.

The lender behind the letter told News 4 the letter is no longer valid.

Coffman referred to the pair as “serial squatters” given their lengthy record of evictions and judgements.

On the day the pair moved out of the home on Mission Walk Court a neighborhood trustee said, “how can you afford all this lavish furniture and not pay for where you live?” Movers rolled out nice dressers, televisions, and even a new pool table.

Coffman believes Harris works for a collection agency, and recently attempted to serve an order of protection against him.

Jimmerson is employed at a big box store in west St. Louis County. Over the phone, Harris told News 4 the judgements are related to falling on hard times, and a fire.

However he couldn’t tell News 4 at which property the fire occurred.

He also said his paychecks have been garnished over the judgments, but the landlords News 4 spoke with claim they are still owed thousands of dollars. The Missouri Attorney General would like to hear from any potential victims.

Coffman said he spoke out because he’s concerned someone else might lose money.

“I wouldn’t be speaking with you right now if I didn’t desperately want to see this put to a stop,” he said.

In his phone call to News 4, Harris said he’s calling 60 Minutes, and also threatened to file charges against anyone that took his lawn mowers on moving day.

News 4 cameras captured Harris and Jimmerson pushing lawn mowers on a neighboring property before driving off after they were evicted.