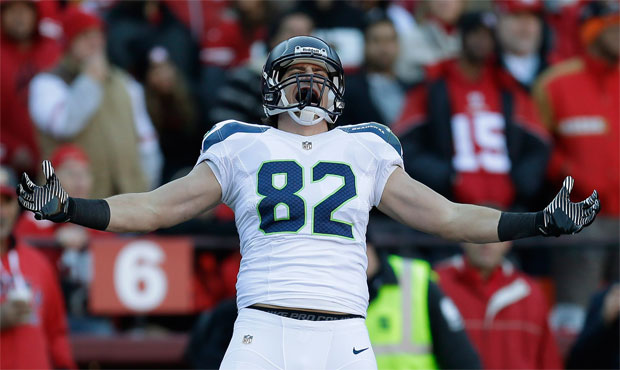 Luke Willson returns to the Seahawks less than two years after leaving. (AP)

The Seahawks had a vacancy in their tight end room. It didn’t last long.

Heaps: Why Will Dissly has emerged as valuable offensive weapon

After news broke Tuesday night that the Seahawks were finalizing a trade to send Nick Vannett to the Pittsburgh Steelers, another report surfaced from NFL insider Adam Caplan that Seattle would fill Vannett’s spot with a former teammate of his: Luke Willson, a member of the Seahawks’ two Super Bowl teams earlier this decade and a current free agent.

Willson, 29, was drafted by the Seahawks in the fifth round of the 2013 NFL Draft and quickly became a fan favorite in the city – and on the airwaves of 710 ESPN Seattle, where he was a frequent guest known for interviews that rarely spent much time discussing football X’s and O’s.

He spent five seasons with the Seahawks, with 2014 serving as his best year statistically – he caught a career-high 22 passes on 40 targets for 362 yards and three touchdowns that year. His last season with Seattle was 2017, in which he had 15 receptions for 153 yards and a career-best four TDs.

Willson went to the Detroit Lions prior to the 2018 season as a free agent. In one year with the Lions, he had 13 catches for 87 yards in 14 games (eight starts). He joined the Oakland Raiders this offseason but was cut at the end of the preseason. He also had a prominent role on HBO’s Hard Knocks series, which followed the Raiders’ camp this summer.

TE Luke Willson describes the reality of getting cut in the season finale of #HardKnocks. pic.twitter.com/AyNmtNPqhK

Willson appeared to acknowledge his return to the Seahawks with a tweet late Tuesday night featuring a GIF of WWE wrestler The Undertaker. The tweet noticeably was tagged as coming from Renton, where the Seahawks’ headquarters are located.

Check out some of Willson’s more memorable interviews on 710 ESPN Seattle in the links below.