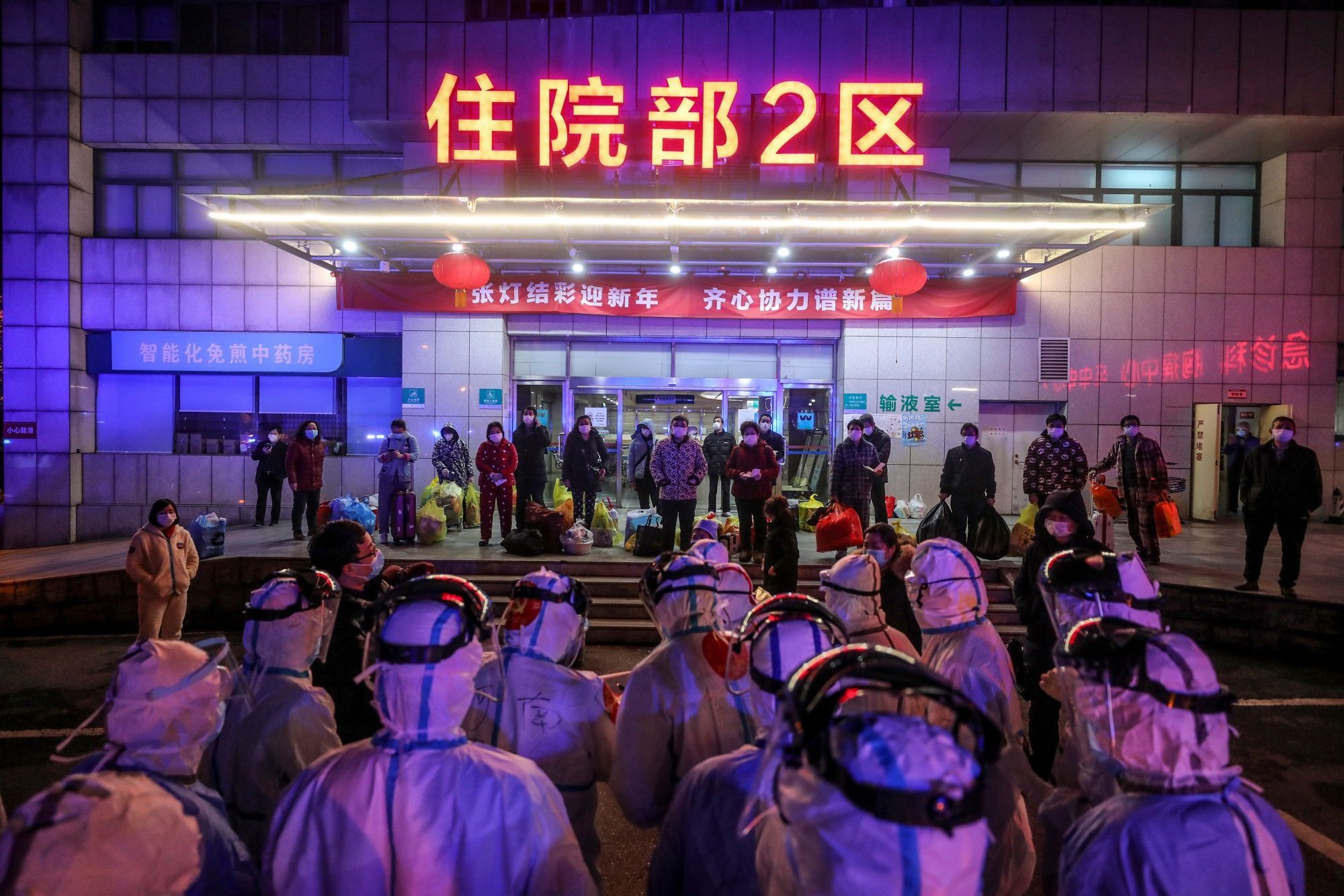 Saudi Arabia said it would suspend the umrah pilgrimage for citizens and residents, while the European Central Bank and UBS Group AG said they would restrict travel. Traders are speculating that the Bank of England will cut rates this month.

General Electric Co. said the outbreak would hurt first-quarter results, while the Tokyo Olympics Committee said it had no intention of canceling the event.

Click VRUS on the terminal for news and data on the coronavirus and here for maps and charts. For analysis of the impact from Bloomberg Economics, click here.

Saudi Arabia is suspending the umrah pilgrimage to Mecca for its citizens and residents in response to the coronavirus, state-run news agency SPA said on Wednesday. The kingdom has one reported case.

Egypt barred Qatari citizens from entry, in a move the cabinet said was in response to the Gulf state’s decision to restrict arrivals from the North African country. The move, the cabinet said in a statement, was a precautionary one aimed at containing the spread of coronavirus. The ban takes effect from March 6 and also applies to Qataris holding valid residency in Egypt.

Prime Minister Justin Trudeau announced the creation of a new Cabinet committee on COVID-19 chaired by his deputy Chrystia Freeland to complement the Incident Response Group.

Tokyo Olympics Committee member Yoshiro Mori said at an evening briefing in the city that the body has no intention of canceling the Games, amid concerns they could be postponed due to the virus outbreak.

The country reported 586 new cases, taking the total in the country to 2,922. The death toll there stands at 92, after 15 more died. President Hassan Rouhani said the coronavirus has stretched to almost all provinces.

About 1,150 high school students in central Israel will enter a two-week quarantine after one of their classmates tested positive for the coronavirus, Ynet said, citing the health ministry. The boy also attended a soccer match at Tel Aviv’s Bloomfield Stadium before being diagnosed, Ynet said. The ministry told thousands of fans who were at the match to enter a 14-day home quarantine.

The student contracted the illness at his job, where his manager returned from a trip to Italy and worked for three days before testing positive, the local website reported.

China to Offer Financial Support to Some Airlines (6:02 a.m. NY)

China will give financial support to domestic and foreign airlines still operating or having resumed regular passenger flights between Chinese and overseas destinations during coronavirus outbreak, according to a statement from the Civil Aviation Administration of China.

In less than two weeks, the coronavirus has spread in Europe from a handful of cases in northern Italy to thousands across the continent. Confirmed cases in Germany rose to 240 on Wednesday from 196. The organizers of the country’s biggest industrial fair, the Hannover Messe, postponed it to July from April. The event is usually attended by Germany’s chancellor Angela Merkel and attracts more than 200,000 visitors.

Italy is considering closing all schools for 15 days, Repubblica said. The government is ready to expand its stimulus measures, pushing its deficit-to-GDP ratio above 2.4%, according to an official. Sweden said cases doubled to 30 and warned the outbreak would shave 0.3 percentage off growth this year. Infections in neighboring Norway rose to 33 and those detected in Belgium jumped to 20 after 10 more people tested positive. An official of the European Defense Agency in Brussels tested positive.

Cyprus Energy Minister Georgios Lakkotrypis has gone into self quarantine after a trip to Italy.

Under the worst case scenario where all the world’s major economies face a disruptive outbreak of the coronavirus this could cause GDP to drop by as much as in China in 1Q. That would mean global growth grinds to a halt in 2020 at a cost of $2.7 trillion in lost output.

Traders are pricing in a 60% chance that the Bank of England will lower borrowing costs by 50 basis points this month, with some market watchers saying the move may include an emergency cut before its scheduled meeting.

That prospect sent the yield on 10-year U.K. government bonds on Wednesday to 0.335%, an all-time low. Before the Fed’s action on Tuesday, money markets were pricing in a 25-basis-point cut for the BOE in March.

After spending years enhancing trading desks with cutting-edge analytics, fast access to outside venues and layers of surveillance, banks are finding it’s hard to relocate their human operators, even in the face of the deadly coronavirus. With the illness now reaching New York, firms are trying to figure out what to do with armies of employees who can’t simply log in from a laptop at home.

Diamond sales in China slumped since the outbreak as shoppers stay home. De Beers, the biggest diamond miner, said sales fell by more than a third in its second sale of the year, compared with the first one in January.

IHS Markit downgraded its assessment of the whole U.K. economy’s performance in February, a move partly driven by slower growth in services — the nation’s dominant sector. The firm said the virus was the “main headwind to growth” in the month.

The Chinese oil trading giant has asked staff to work from home until further notice.

The government is considering stimulus measures worth more than 100b baht ($3.19b) amid the coronavirus outbreak, Finance Minister Uttama Savanayana said. The measure will be aimed at supporting the economy over 3-4 months during the outbreak.

Philippines is also readying fiscal and other forms of stimulus measures.

Many of the Chinese travelers who have driven the industry’s expansion were already staying home, but the global spread now means that Germans and Belgians are rethinking ski trips to Italy and Japanese are canceling visits to Bali. At stake is the $1.7 trillion in revenue that international tourism generated in 2018.

Japan’s largest drugmaker Takeda earlier said it is developing an experimental therapy for the novel coronavirus with the goal of making it available in 9 to 18 months. Separately, CanSino Bio said its vaccine candidate is in the pre-clinical stage

The European Central Bank has restricted all non-essential travel by members of its Executive Board and staff and canceled conferences and visits amid the coronavirus outbreak in Europe.

President Donald Trump has so far balked at pursuing a major fiscal plan to counter the market turmoil stemming from the virus’s spread. He said on Tuesday it’d be a good time for Congress to cut income taxes again but hasn’t made his own proposal, and he is not considering a payroll tax cut or a rollback of tariffs on Chinese imports, his Treasury secretary said.

Malaysia reported its biggest jump in infections with 14 new cases on Wednesday, taking its tally to 50. The new cases were confirmed to be within a single cluster. A 52-year-old Malaysian man traveled to Shanghai in the middle of January and developed symptoms only on Feb. 27, when he was tested and confirmed two days later. The illness spread to 16 people, mostly through meetings, including 5 that were second-generation infections. Malaysia is awaiting the results of 180 of their close contacts.

South Korea’s Health Ministry confirmed 293 more coronavirus cases as of 4pm local time on March 4, according to a text message from the ministry. President Moon Jae-in canceled visits to the United Arab Emirates, Turkey and Egypt and the government is seeking a 11.7 trillion won ($9.8 billion) extra budget in response to the epidemic.

Wizz Air has made adjustments to its flight schedule between March 11 and April 2, primarily to Italian destinations, after the coronavirus is hurting demand. ANA and Japan Airlines said they will reduce domestic flights from March 6 to 12 , while VietJet said it will suspend all flights between Vietnam and South Korea from March 7.

China’s car sales had the biggest monthly plunge on record as the coronavirus kept shoppers away, intensifying the pressure on automakers already battling an unprecedented slump before the outbreak. Sales fell 80% in February, according to preliminary numbers. Average daily sales improved toward the end of the month compared with the first three weeks.

India reported a jump in infections as 15 Italian tourists and their driver tested positive, while at least six other locals contracted the virus from a person returning from Italy, according to Health Minister Harsh Vardhan. The tourists are in quarantine in Delhi. There are now 28 confirmed cases in India, up from six reported Tuesday.

Reserve Bank of India Governor Shaktikanta Das said he is ready to act to shield the economy from the virus and reiterated that there is room to cut interest rates if necessary. “There is a strong reason for coordinated policy action,” he said in an interview with Bloomberg News in Mumbai.

To contact Bloomberg News staff for this story: Adveith Nair in London at [email protected]

To contact the editors responsible for this story: Stuart Wallace at [email protected], Adveith Nair

For more articles like this, please visit us at bloomberg.com

Subscribe now to stay ahead with the most trusted business news source.