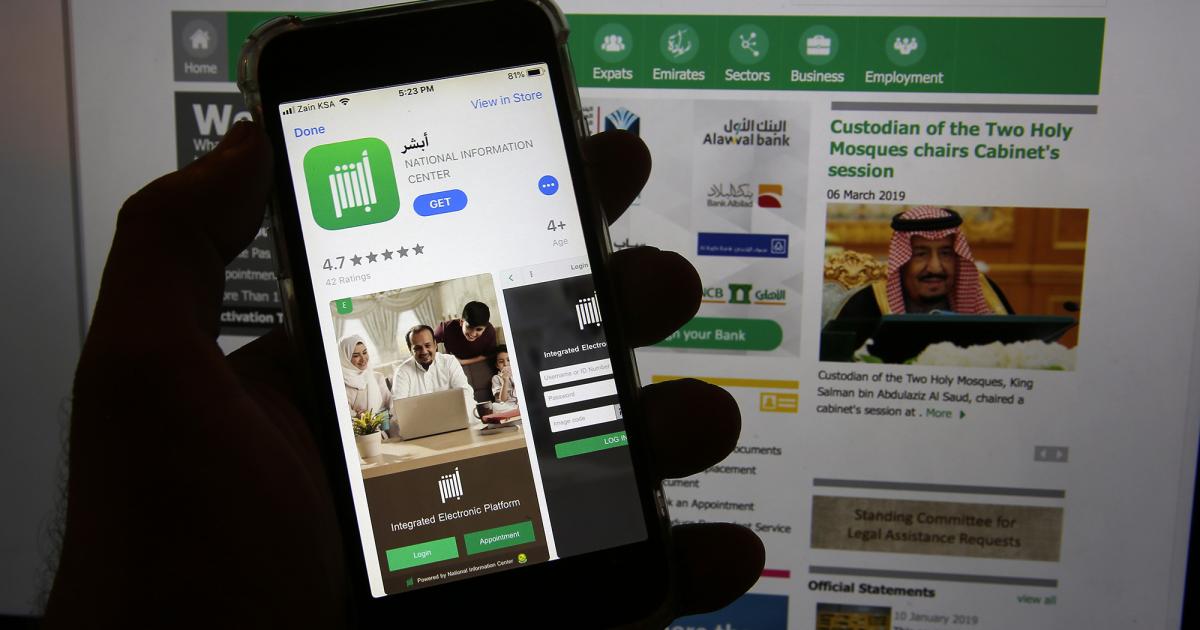 In Saudi Arabia, citizens and residents can use Absher, an online government platform, to access Interior Ministry services. Absher comes as a mobile app available for iPhones and Android phones, as well as an online portal. It offers e-services including renewing passports, applying for ID cards, paying traffic tickets, applying for or renewing migrant workers’ visas, and obtaining hajj (pilgrimage) permits.

But with every Saudi woman required to have a male guardian, the guardians also use Absher to grant or deny permission for women and children to travel abroad and obtain a passport under a subsection on “dependent services.” Saudi employers and citizens who sponsor foreign nationals living in Saudi Arabia can also use Absher to approve or reject requests to leave the country.

Saudi Arabia’s interior ministry introduced e-services in 2011 and the Absher mobile app itself in 2015. The mobile app is available on the Apple’s App Store for iPhones as well as the Google’s Play Store for Android phones, and the online portal is hosted on the Interior Ministry website.

The platform name, Absher (أبشر), in Arabic carries the meaning “your request shall be fulfilled.”

1. Does the Absher app “track” women?

Not in real time, but it does maintain a historical record of travel. Saudi Interior Ministry regulations require Saudi women to receive permission from a male guardian – usually a father, husband, brother, or even a son – to obtain a passport or travel outside the country. The Absher portal allows guardians to provide permission for a single trip, for multiple trips, or unlimited travel until the passport expires. The portal also allows the male guardian to suspend a previously issued travel permission.

The portal and app effectively allow men to use modern technology to control women’s movements. Human Rights Watch has documented cases in which male guardians have prevented women from traveling abroad, including for study or work. It also affects women’s ability to get jobs and can seriously hamper a woman’s professional advancement. Employers may not wish to hire women for jobs that require traveling abroad as the woman’s ability to travel would be dependent on their guardian’s cooperation. Women who already have jobs may find themselves unable to move further in their careers due to travel restrictions.

Several highly publicized stories of Saudi women escaping the country have shed light on one of the most serious problems of the male guardianship system: requiring guardian permission for women to travel makes it difficult for women exposed to family violence to escape abuse.

The Absher system sends automatic text messages to male guardians when they perform certain functions such as approving a dependent’s travel, or if a document such a passport has been renewed or requires renewal.

The Absher portal also displays a travel log function that allows male guardians to view all the trips in and out of Saudi Arabia that their female dependents make, showing destination countries and dates of travel. Other than the travel log, Absher does not track women’s movements inside the country or abroad.

Starting in 2012, the Interior Ministry’s General Directorate of Passports sent automatic text message alerts to male guardians if their dependents traveled in or out of the country. However, after a backlash, the authorities announced in early 2014 that they had suspended the notifications. Human Rights Watch interviews with Saudi women and activists confirm that Saudi authorities no longer send these notifications.

2. How did the situation change when the Absher app was introduced?

Prior to the Absher app, Saudi authorities issued a travel permission card or paper from the Interior Ministry that Saudi women presented at passport control when leaving the country. The card, obtained by a male guardian in person at a General Directorate of Passport office, stipulated the number of trips and for how many days their guardian had approved their travel. Guardians could also decide to allow unlimited travel for female dependents until their passport expired. Saudi women say that in later years, the travel permission as stated on the card would also be reflected electronically for border officials, which meant that women who wanted to flee the country would be less likely to be able to use a forged permission card.

Some Saudi women told Human Rights Watch that the introduction of Absher improved the situation for women whose guardians had refused to grant travel permission because they did not want to bother to go to a passport office and complete the paperwork. The Absher portal, whether the website or mobile app, allowed guardians to approve travel requests easily, so they could no longer cite the need to go to the ministry as an excuse not to grant permission.

3. Some say that Absher app helped women escape. Doesn’t this make it a good thing?

Some Saudi women contend that Absher is preferable to the old card-based system, because women can more easily and surreptitiously change travel permissions and halt text message alerts on their male guardian’s phone than forge travel permission cards under the old system. Human Rights Watch has documented at least three cases in which Saudi women successfully fled Saudi Arabia after they obtained their father’s mobile phone password and changed the Absher travel permission settings while he was away from the phone.

It is unclear how many women have managed to escape by changing the settings on their guardian’s phone. Many other women escape when already abroad, whether in a third country traveling with their family or refusing to return after they have traveled to study or work abroad.

But those who flee by changing their guardian’s phones settings can be prosecuted if they are forcibly returned to Saudi Arabia. A Saudi security expert told Arab News, a Saudi newspaper, in August 2016 that “getting access to the guardian’s account is an electronic crime.”

4. Are there other problems with the app?

Yes. An unreported issue is that Absher, also under the same category of “dependents service,” enables Saudis who sponsor foreign nationals living in the country to decide whether their foreign workers, spouses, or children can leave the country. They can do this by issuing exit and re-entry visas that specify when they must return to Saudi Arabia by, or by exercising control over their final exit visas.

The Absher portal also perpetuates the power of Saudi citizens, through their visa sponsorship, over their foreign spouses or children who have residency in the country. Arab News has reported that Saudis could cancel a foreign spouse’s residency visa and issue an exit visa, putting the spouse at risk of arrest unless they leave the country. This had been such a problem during divorce cases that in 2016 the Justice Ministry issued a decision that judges could allow foreign nationals to stay in the country pending the completion of their divorce case with their Saudi spouse. But that decision did not change Saudis’ control over foreign spouses while they remain married.

5. Why do Google and Apple allow this app on their app stores? What are their responsibilities?

Google and Apple maintain policies for apps hosted on the Play Store and App Store that prohibit inappropriate or objectionable content such as pornography, hate speech, bullying and harassment, illegal activity, etc. Google does not pre-screen apps before allowing them to be uploaded onto the Play Store; while Apple does some pre-screening, but it is unclear how thoroughly they ensure that apps comply with their rules against harassment or abuse before they are posted.

The companies largely rely on individual users to flag inappropriate content that violates Play Store or App Store rules rather than pre-screening app content. Representatives of both Google and Apple have publicly said that the companies would review Absher to determine if it violates their terms of service. Business Insider, a business website, said in March 2019 that Google has communicated to US Representative Jackie Speier that it would not remove the Absher app from its platform. Neither company has publicly affirmed whether the app conforms to their terms of service.

In the case of Absher, which facilitates discrimination against women and is used to limit freedom of movement of women and foreigners in Saudi Arabia, Google and Apple have a responsibility to mitigate abuses associated with Absher.

Women’s rights activists told Human Rights Watch that Absher’s removal would directly harm Saudi women who have benefitted from the relative ease with which they or sympathetic family members can surreptitiously change their travel permissions without their male guardian’s knowledge.

For this reason, Apple and Google should urge Saudi authorities to end discriminatory practices including the removal of all travel restrictions on leaving the country for women and migrants instead of merely removing the Absher app from their platforms, Human Rights Watch said.

6. If Google and Apple stopped hosting the Absher app on their app stores, would the problem be solved?

No. The travel restrictions Saudi Arabia imposes on Saudi women are based on Interior Ministry regulations and would remain in place even if companies made the Absher mobile app unavailable. Likewise, a Saudi employer’s control over foreign migrant workers’ ability to leave the country would continue. The Absher online portal would remain in place on the Interior Ministry’s website and become the primary enforcement vehicle for the travel restrictions.

7. What should Google and Apple do now?

Google, Apple, and other companies operating or offering products and services in Saudi Arabia should strongly advocate to the government that they should end discriminatory practices, including by abolishing the discriminatory male guardianship system and the travel restrictions on women and migrants that clearly violate rights. Such discriminatory practices impede these companies from fulfilling their human rights responsibilities. These calls would also add a significant voice to advocating for women’s rights in Saudi Arabia.

While Google and Apple should not facilitate any human rights abuses through apps hosted on their app stores, Human Rights Watch does not currently advocate removing the app from their stores because it could lead to unintended negative consequences for some women.

Companies should always assess apps to determine whether they may undermine or violate rights, with extra scrutiny for apps developed or sponsored by governments. They should also revise their terms of service to prohibit apps expressly designed to violate rights and make every effort to mitigate any human rights harms before making such apps available.

8. What should other governments do about Absher and travel restrictions for Saudi women?

Governments should press the Saudi authorities to end the male guardianship system. They should, in particular, publicly identify all areas in which, despite Saudi Arabia’s women’s rights reform rhetoric, Saudi Arabia continues to fall short on women’s rights and advocate positive changes. Governments should take the position that the travel restrictions for Saudi women are a pernicious aspect of the male guardianship system and urge the Saudi government to remove the restrictions immediately.

9. What does international human rights law say about the right to leave a country?

The Universal Declaration of Human Rights provides that “everyone has the right to leave any country, including his own, and to return to his country.” This is an established principle under international human rights law and any restrictions can only be individual, for a legitimate reason, and proportionate – as, for instance, during a criminal investigation. Saudi Arabia violates this standard in the way it restricts Saudi women who wish to travel abroad, as well as migrant workers and foreign residents who wish to leave the country.

The discriminatory nature of the travel restrictions also breaches Saudi Arabia’s obligations under the Convention on the Elimination of All Forms of Discrimination against Women (CEDAW). The UN Committee on the Elimination of Discrimination against Women, which oversees the implementation of the treaty, in March 2018 called on Saudi Arabia to “To abolish practices of male guardianship … and ensure that it entitles all women to the right to obtain a passport and travel outside the country, study abroad on a government scholarship, choose their place of residence, gain access to health care services and leave detention centres and State-run shelters without having to seek a male guardian’s consent.”