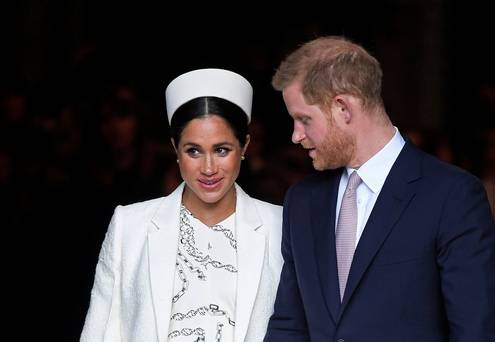 Video footage of the pair was a body-language delight. The sister- and brother-in-law joked together, with Kate’s nose crinkling up as it does when she’s genuinely amused and Harry clearly in the role of the one providing the laughs. Ah, just like old times.

It was a brief reminder of how things used to be, when Harry was the footloose and fancy-free little brother, tagging along and making the jokes, while William and Kate played grown-ups. At official events back then, Harry seemed to enjoy putting Kate at ease, ruffling the stuffiness of the occasions, injecting a little normality into the unnormal world they all inhabit.

Some observers of Kate and Harry’s ease in each other’s company last weekend pointed out that it was, perhaps, the absence of William that made the difference.

Strained relations between the brothers are at the heart of the rumoured rift, and these have their origins in William’s warning that Harry was rushing into marriage – advice that was deeply resented by the younger brother and, most likely, reported to his beloved.

Classic big-brother stuff, you might say, rooted in lifelong roles of protector and protected, sensible and silly, trailblazer and rebel – roles that probably became more pronounced when they lost their mother. They were roles that suited, once, but time passes and in adulthood, other roles come into being.

That’s where problems can occur. Our siblings are the people least willing to allow us to change. If we change, they have to alter to suit and that’s hard, even when you’re not in the spotlight.

Easier then to blame the person who seems to be the cause of this change, quite often the spouse. And that spouse, more often than not, is a wife.

There were whispers about boring and bossy William last weekend after Kate and Harry’s giggles at the Abbey, but more observers suggested that it was the absence of Meghan that allowed them to relax into their old easy ways. Everything was fine, the narrative seems to be settling in, until Meghan arrived.

The good old Yoko Ono role, it never gets stale.

The Anzac Day outing was followed by reports that Kate and William had recently and finally made a visit to Harry and Meghan’s Frogmore Cottage, by way of trying to warm up and normalise things before the baby’s arrival.

The image of Meghan giving Kate a tour of the house and showing off her nursery lost out, however, as the stronger narrative stuck of sibling rivalry growing deeper as a new generation arrives.

Instead, as Meghan and Harry nested in wait for their baby, reports came of how they had unfollowed William and Kate on Instagram. As it happens they unfollowed everyone, bar a small number of mental-health charities. They failed to call Harry’s niece Charlotte by her ‘Princess’ title in their Insta fourth-birthday greetings, though they did send emojis.

Elsewhere it was suggested that they might be getting a sleep whisperer. And according to a nanny who has never worked for them, they are, more likely to dress their baby like Amal Clooney’s kids than Harry’s smocked and knee-socked niece and nephews.

Even if these are not their plans, Meghan and Harry are daring to be different. And they should be allowed to be. Not only because the weight of duty does not lie as heavily on him as it does on his big brother, but because he’s entitled, as we all are, to strike out from the role we inherited from the family we grew up in.

Harry is allowed to be an adult and if he’s not given that freedom, then the rift, if one exists, will only grow.

It may well be the case that Harry has changed since he met Meghan, but that’s not necessarily because she’s bossing him around. It might be that she’s given him the ability to be who he wants to be, instead of the person his family expect him to be.

Before he met Meghan, Harry was the rebel of the family, but only of sorts. He partied harder and had more reckless fun than his big brother, but that was a persona and a lifestyle that suited his appointed role in the sibling pecking order. Oh that crazy Harry, with his fun-loving ways and his joshing around at boring events and his refusal to settle down and grow up. Everyone metaphorically shook their heads affectionately at little Harry and his ways and Harry seemed happy enough to keep it that way.

Until he decided that he was, in fact, also a grown up. Who was in love and wanted a wife and, next, wanted his own household and his own family. Worse, he seemed to want to be taken seriously, with his separate household outside the “goldfish bowl” and the decision not to pose for photos with the newborn.

Perhaps, as his big brother is rumoured to have warned, Harry is moving too fast in fashioning this new life with Meghan – but through it, he is stating clearly that it is his life. Unfortunately, though, he also has a public role.

He has less responsibility than his brother but he can’t withdraw from the goldfish bowl entirely.

This is impossible as can be seen in how Harry and Meghan’s attempts to make their baby’s arrival utterly private have in some way had the opposite effect. The rumour mill has gone wild with speculation on sibling rivalry that could poison the generation to come.

The Sussexes’ silence almost drew more attention, what with repeated suggestions that the baby had arrived and was being kept under wraps for now.

Radio DJ Chris Evans cryptically said on his show that he “knew something”. Bookies stopped taking bets on gender or names. The Queen’s car was spotted with pink blankets in the back seat.

Not knowing drove people and newspapers mad, but if there’s one thing most of us know, it’s sibling rivalry, so the focus went on that.

To some extent, the rumours around William and Harry and their wives is projection on the part of everyone else. We don’t know what it’s like to be royal, but most of us know what it is like to have a sibling. And we know that it doesn’t matter if you’re rich or poor, royal or commoner, siblings can have serious problems when one of them dares to step out of their role.

If this rumoured rift is not to colour relationships between the Sussex and Cambridge cousins in years to come, Harry needs to be allowed to be his own man. Particularly now that he’s the daddy.