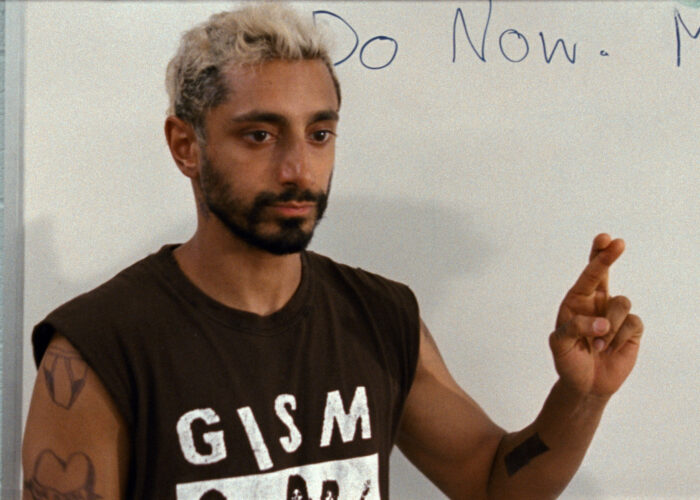 Riz Ahmed is a talker. The British-Pakistani actor and rapper loves words and wordplay, whether he’s delivering lines from a script or showing off his own spoken word skills on his high-concept hip-hop albums (produced under the name Riz MC).

The London native and Oxford University alum, who won a 2017 Emmy Award for his portrayal of a college student imprisoned for murder on HBO’s “The Night Of,” first got noticed in the indies “Four Lions” and “The Reluctant Fundamentalist,” then landed higher-profile roles in “Nightcrawler,” “Jason Bourne” and “Rogue One: A Star Wars Story.” But Ahmed admitted that, given his garrulous nature, preparing to play the lead character, Ruben, a noise punk drummer who suddenly loses his hearing, in the new movie “Sound of Metal” presented him with a daunting new challenge.

“I had to step out of my comfort zone and get used to silence. I had to learn to express myself in new, nonverbal ways,” said Ahmed on a video chat with The Chronicle from outside Joshua Tree National Park, where he’s filming the sci-fi thriller “Invasion.”

“It was something that I really wanted to throw myself into. I was hungry for a creative challenge.”

The nuanced intensity of Ahmed’s performance in “Sound of Metal” is already garnering awards buzz, including a recent Gotham Award nomination.

When the movie begins, Ruben is an athletic blur of energy and fury on the drums. He’s also a recovering heroin addict with reserves of unspecified resentment. He lives in an RV on the road with his girlfriend and bandmate (played by Olivia Cooke) until his rapidly deteriorating hearing lands him at a secluded sober house for the deaf.

With his sinewy muscles, tattoos and bleached platinum hair, Ahmed transformed physically for the role. Even more dramatically, he tapped into the extreme emotional dislocation of a man in seething denial of his altered new reality, until he starts the tough work of acceptance.

Ahmed discovered during the strenuous shoot that it takes a lot of grit and vulnerability to learn how to shed one well-worn identity and make peace with a new one.

“I think a lot of us can relate to this quite directly in the context of corona,” he said. (Ahmed lost two family members to COVID-19 early in the pandemic.)

“Ruben is a workaholic who is forced by a sudden health crisis to be cut off from his work and relationships and the things that define him and goes into a kind of purgatory to figure out what matters most and what doesn’t.”

At his first meeting with director and co-writer Darius Marder in 2017, “Darius told me right off, ‘Everything is going to be real. When you’re on camera drumming, you’re going to be playing the drums and we’ll use that actual sound,’ ” Ahmed recalled.

Ahmed agreed the authenticity was important, and he even worked up to playing live gigs despite the fact he had never previously held a drumstick.

“I love to find the mistakes when I’m watching something like this (an actor playing a drummer), but everything Riz did is spot-on,” said Metallica drummer Lars Ulrich during a Mill Valley Film Festival vritual Q&A with Marder and the “Sound of Metal” cast in October. “It’s just incredible to watch.”

Ahmed said learning ASL and working with his deaf castmates, including the exceptional Chelsea Lee, opened him up to the realization that verbal communication, which he’s always been adept at, can be a crutch of sorts.

“There’s this saying in the deaf community, which my ASL instructor Jeremy (Stone) told me, that hearing people are emotionally repressed, because we hide behind words. I realized communicating with more of your whole body does open you up,” he said.

The film’s remarkably immersive sound design by Nicolas Becker (“Gravity”) allows the audience to hear everything Ruben hears, which translates into an unusually emotional viewing experience. We experience the first pop and high-pitched buzzing in Ruben’s ear signaling a rupture in his aural sensitivity, and then the world’s jangling sounds rapidly grow muffled, and finally hushed, leaving Ruben in an internal soundscape of vibrations.

Ahmed was fitted with devices in his ears that emitted white noise so he couldn’t hear his own voice. Small mikes attached to his body captured the hyper-real sounds of a racing heart, or a deep breath.

“Nicolas would come up to me on set and put this weird kind of orb mike on my chest and ask me to breathe and blink and swallow, move my tongue against my teeth, and it would pick up this inner audial landscape,” Ahmed said.

Although “Sound of Metal” was shot back in 2018, Ahmed sounds like the lessons he learned working with Marder and the deaf community of actors — about true communication, isolation and identity — have stuck with him in profound ways.

Ahmed is proud of his Pakistani heritage and has written blistering rap lyrics about being a brown-skinned Muslim in the post-9/11 world. He also co-wrote the new cross-genre musical saga “Mogul Mowgli,” “the most personal piece of work I’ve ever made,” he said.

And yet “Sound of Metal” “was an important reminder for me that identity is something that is constantly evolving and being renegotiated. Even the most fundamental aspects of your identity, the things you cling to, are constantly up for grabs. That’s something I think is worth remembering, because as empowering as it can be to have a clear idea of who you are, it can also be limiting.”

“Sound of Metal” (R) opens Friday, Nov. 20, in select theaters and will be available to stream on Amazon Prime starting Dec. 4.