Race and politics in Mount Healthy, a city in transition 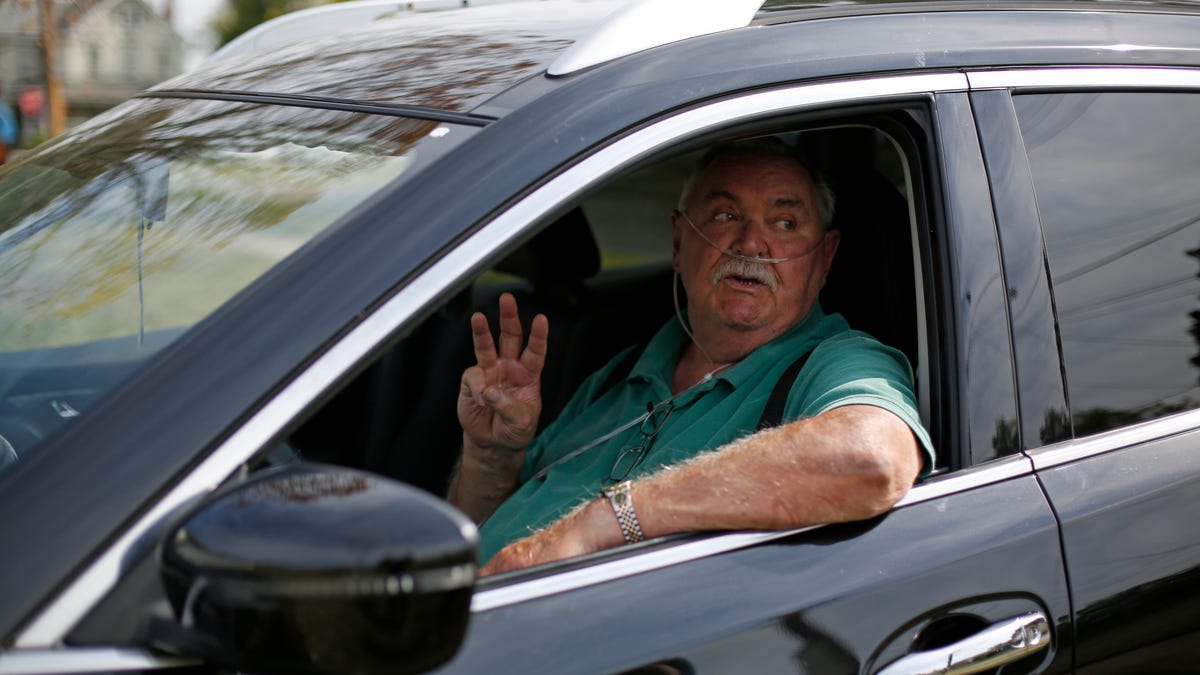 Race and politics in Mount Healthy, a city in transition

Editor’s note: This is the latest in a series of stories we’re calling Going Home in which journalists from the USA TODAY Ohio network return to the communities where they grew up to share firsthand how the contentious 2020 election is playing out in various corners of this battleground state.

MOUNT HEALTHY — It’s odd hearing people call my childhood neighborhood a food desert. I did not grow up well off in the Compton Groves community of townhomes and apartments in Mount Healthy, a city of roughly 6,700 in the Greater Cincinnati area.

But I wanted for nothing.

I had transportation to a now-closed Kroger a little over a mile away. I swam — or tried to swim — in the community pool across the street. I walked safely to and from my now-demolished elementary school, Rex Ralph, and everywhere else in the 1.5-square mile city straddling Hamilton Avenue north of downtown Cincinnati.

Once, in junior high, I felt totally comfortable being dropped off alone at the annual summer festival in the city park; I figured I’d find someone to hang out with eventually.

Today, nonprofit organizations supply food to the residents of Clovernook Apartments, the new name of my old community, with buildings that are not properly maintained. Mount Healthians I talked to confirm there is criminal activity, and I was stopped and questioned by a security guard on patrol during my visit.

The area doesn’t exactly fit the “charming” and “quiet” labels people toss around about Mount Healthy, a Democratic territory in the southwestern part of Ohio’s Trump country. The oft-told story is that the city came up with its name because residents survived the cholera epidemic in the mid-1800s. Prior to that, it was called Mount Pleasant. (Seriously.)

It’s a fitting moniker because Mount Healthians will say everyone gets along and no one argues over politics. But there is a deeper layer of neglect and need the small city is trying to address.

One concerned resident, Mary Laymon, 55, said she and her husband, Greg York, 57, are trying to help the community by providing ministry and food on their property, Tikkun Farms.

“I’m aware of the polarities within our neighborhood around race,” Laymon said. She shared a story about a biracial girl who told her, “My mommy said I should never trust white people.”

Laymon also said there are white residents who become afraid when they see their Black neighbors.

“I think there’s still this fearfulness that we have of one another within the Mount Healthy community that I really want to work to mitigate.”

The city isn’t special in that regard; it suffers from the same pattern of white flight and disinvestment throughout the U.S. When my Black grandparents moved here in the 1970s, it was mostly white. My mother settled in Compton Groves in the 1980s and slowly watched her white neighbors leave over the years.

Mom said the racial makeup was still pretty balanced and the community was still well-kept when we moved to College Hill, a nearby neighborhood, during my senior year of high school. But then, according to Mount Healthy Mayor James Wolf, Compton Groves fell into disrepair and went up for auction. The new owners have hired new managers, who have fallen behind on maintenance.

“That is an issue city-wide that we have,” Wolf said. “There are a lot of absentee landlords with some of our rentals that don’t maintain their properties as well as they should.”

According to U.S. Census estimates, Mount Healthy is 38% African American, up from 23% two decades ago. According to Wolf, politics have shifted as the city has become more diverse, and younger people have moved in, paying an affordable price for the homes of older, conservative folks who are dying. To give you just one example of how long Mount Healthians held onto their houses: My grandfather has lived in his for 47 years.

“As far as registrations go, Democrats outnumber Republicans pretty overwhelmingly at this point, and that has been a shift that we’ve seen over the past 15 years,” said Wolf, who was part of the City Council flip from red to blue when he became an elected member in 2005.

In the 2008 and 2016 presidential elections, Mount Healthians voted for Barack Obama and Hillary Clinton, respectively. Prior to that, they’d voted for Republican candidates in at least the previous three elections.

“We actually have a very specific type of younger person that is investing in our community,” Wolf continued. “We have a large home-school community. We also have people interested in urban agriculture now. We have a lot of people raising chickens in their backyard. &mldr; There are a lot of younger people that intentionally purchased houses here because of the lower property values, but also because of what’s going on in the community and some of the more progressive attitudes.”

In the past five years, new businesses have popped up, including some Black- and female-owned. There’s a coffee shop and an apothecary among still-standing institutions such as Hilltop Glass & Mirror, Robert Hall & Associates tax preparation and the 100-year-old Little Dutch Bakery.

“You definitely have people who grew up in Mount Healthy from way before we were born and some of them are great and progressive and others are really stuck in the past,” said Betty Bollas, 40.

“(They) say, ‘This used to be Mayberry. It’s so sad what happened to this city.’ I’m like, ‘Well, I don’t want to live in Mayberry. I didn’t move to Mayberry, and this city is pretty amazing and has a lot of potential.’”

Dave Huser, a self-described “old-timer,” has lived in the city for 48 years and supports Donald Trump. But he says he will accept any outcome of the election.

“If Biden becomes president, I have to give him a chance and see what he does,” said Huser, 71, who is also a trustee at the Mount Healthy Historical Society. “I vote for the person I feel who will do the best job. &mldr; (Trump) is a businessman, and I think we just needed a change (from) career politicians all the time. I feel like the economy is booming — or was before this virus.”

That perspective isn’t shared by 71-year-old Estella Kyles, a three-year resident of Compton Groves — an area that was struggling before the coronavirus pandemic.

A Biden supporter, Kyles said she is shocked by how Trump talks to people, and she believes he only cares about rich people and himself.

“We ain’t got nothing, y’all got everything,” she said. “I don’t know if I might be hungry next week or not. &mldr; You can’t be president and hate certain people.”

Kyles said she doesn’t discuss politics in the community, but then again, she doesn’t know most of her neighbors. (There’s a lot of turnover; Clovernook Apartments are among 10 landlords who filed the most evictions between 2014 and 2017, according to a study.)

“In these type of areas, I don’t associate with a lot of people,” she said.

In general, a lot of people in Mount Healthy keep their politics to themselves. Most residents I interviewed said they are reluctant to have those discussions, and people with different beliefs live side by side, peacefully. For example, after seeing multiple Biden signs along a main road, I was startled by the shock of red Trump signs in lawns when I turned down a side street.

Back when we were attending Mount Healthy High School, my classmate and dear friend Bryan Smith and I didn’t talk about our families’ politics, either.

“Social media shattered that line of thinking,” said Smith, who now lives in Phoenix. “I feel (Mount Healthy) has gotten more conservative over time. Part of this impression has been formed just because of seeing previous classmates from the area voice their political leanings through social media.”

This opinion not only reveals how Facebook can skew reality, but it also shows how even a Democratic neighborhood can feel unwelcoming for Black people. Both Smith and I have been surprised to see former classmates justifying police killings of Black people, or failing to show compassion in their posts.

But there are nuanced perspectives even in the Black community, of course. Black entrepreneur Robert Hall told me, “I think Mount Healthy is a nice, quiet community. We have had some violent activity in certain areas, but overall, it’s a pretty peaceful neighborhood and a good place to raise a family.”

Pondering this, I pictured truly charming places such as the longstanding Dairy Bar on Hamilton Avenue and the tasty coneys across the street at Gold Star, my old high school hangout. I realized I love that I can mention my name or my siblings’ names to volunteers at a football game, and someone will inevitably remember us.

And there are kind people trying to make a difference here.

But I also thought about Mount Healthy City Schools, where 95% of students are considered economically disadvantaged, and accusations of racism and sexism have been levied against school board members. I took in the unkempt streets and empty buildings.

And then I just asked my mother, who let out several sighs that seemed to hold the weight of the city’s duality.

“It all depends on what part of (the city),” she said. “You’ve still got a lot of quiet streets and people that have been in Mount Healthy for a long time. &mldr; I don’t know. It’s iffy.”