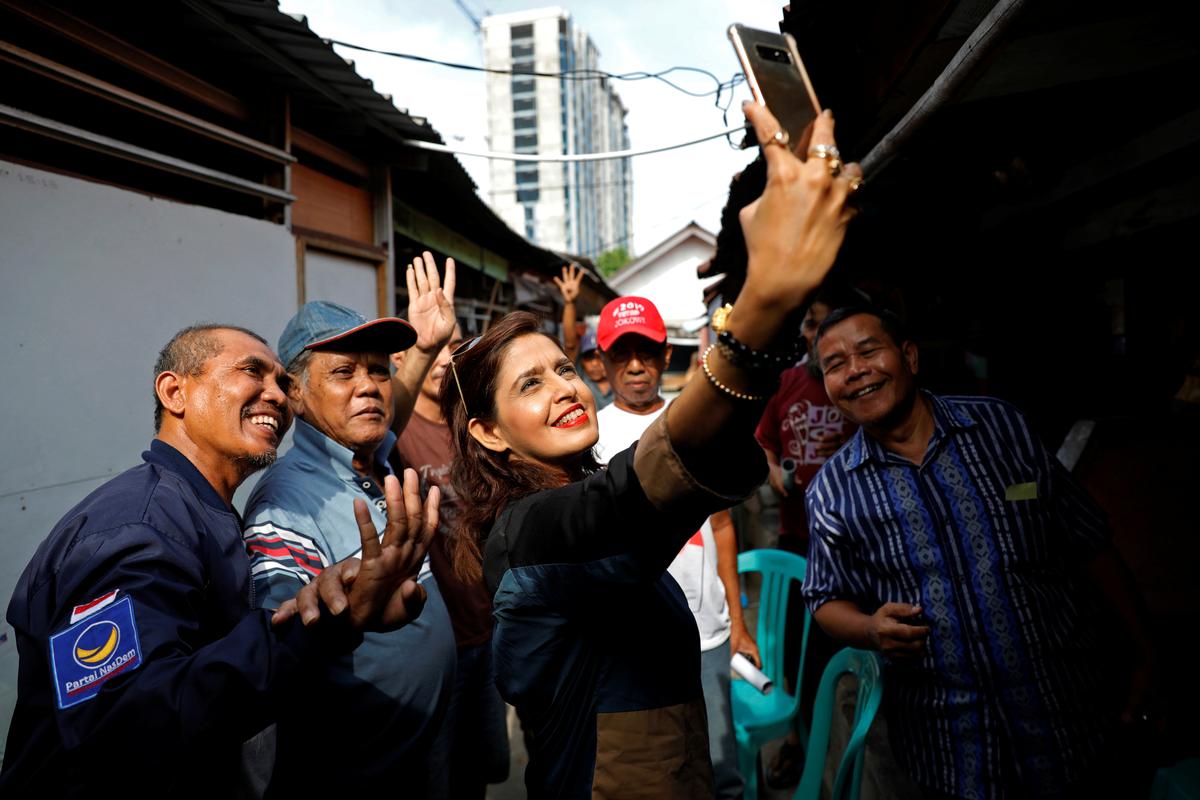 JAKARTA (Reuters) – Shanti Ramchand learned quickly what was expected when she began campaigning in Jakarta for Indonesia’s national parliament – distribute envelopes of cash at a small campaign event, and gift a motorcycle or an air-conditioning unit to the community leader.

Shanti Ramchand, a candidate for the next parliamentary election from Nasdem (National Democratic) party, takes a selfie with her supporters during her campaign trail at a hutment area south of Jakarta, Indonesia, March 14, 2019. Picture taken March 14, 2019. REUTERS/Willy Kurniawan

Ramchand, an aspiring politician from the National Democrat Party, part of President Joko Widodo’s coalition, is trying a novel approach to getting elected. She is not only eschewing the cash and gifts that are traditionally given out on the campaign trail, but making it the centerpiece of her pitch to voters.

Indonesia – the world’s third-largest democracy – has some of the worst money politics in Southeast Asia, according to researchers. Handouts of cash and gifts, anti-graft advocates and politicians say, lead to rampant corruption in its national legislature as successful candidates recoup their election expenses, and more, once elected.

Earlier this month, Indonesia’s Corruption Eradication Commission (KPK) seized six storage chests in a concealed basement owned by Bowo Sidik Pangarso, a parliamentarian seeking re-election from the Golkar Party, another party in Widodo’s ruling coalition. The chests contained 400,000 envelopes each believed to contain 20,000 rupiah – a total of 8 billion rupiah or over $566,000.

Bowo, who has been detained but not formally charged, told reporters last week after leaving an interview with the anti-corruption body that the envelopes were for the national parliament election, not the presidential election, both due on April 17.

While illegal, politicians and analysts say it is relatively rare to see prosecutions for election-time bribery.

Two politicians from the National Mandate Party, part of the opposition coalition headed by former general Prabowo Subianto, were sentenced to three months in prison in December for distributing coupons for the Umrah pilgrimage to Mecca to voters. They will not be disqualified from running for office again.

In 2017, the then speaker of the national parliament Setya Novanto was arrested for orchestrating a scheme to plunder $173 million from a government contract for a national electronic identity card.

The KPK alleged most of the money was to be funneled to up to 60 lawmakers. Novanto was sentenced to 15 years in prison, underscoring why Indonesia’s national parliament rates as among the most corrupt institutions in the country in surveys.

In a south Jakarta neighborhood, Ramchand is working the courtyard crowd, engaging in some questions and answers as she tries to convince constituents to vote for her.

“We don’t choose the envelope, right?,” she says, receiving scattered approval from the crowd of about 40 congregating in a shady courtyard to ward off the mid-afternoon sun.

“That’s right. Check the background of the candidate. Ask them about their programs. Your voice can’t be bought.”

In an interview, Ramchand said at three out of ten planned appearances, community leaders would demand gratuities to allow her to talk to the voters in her South Jakarta electorate.

“Sometimes people bluntly ask for money. Others ask for air conditioning units or a motorbike,” she told Reuters.

Ramchand, a policy consultant to corporations and governments who has lived overseas for most of the past decade, showed Reuters WhatsApp messages sent to her by village chiefs and officials from religious organizations demanding money to let her speak at gatherings.

Reuters could not independently verify the messages.

Ramchand said she has also declined to pay the usual political “dowry” required by political parties to endorse candidates.

The going rate for a serious run for one of 560 seats in the national legislature is about 10 billion rupiah, or $708,000, according to the former deputy chief of the KPK, Busyro Muqoddas.

“We live in a kleptocracy, not a democracy,” said Busyro.

A spokesman for the campaign team of Widodo, Ace Hasan Syadzily, said his own party, Golkar, does not demand a political dowry but conceded “vote buying does happen”. The president was against money politics, he added.

A spokesman for the opposition coalition led by Prabowo, Dahnil Anzar Simanjuntak, declined to comment on whether candidates had to pay parties to be endorsed.

“The cost of running for political office is expensive and can potentially be the cause of corruption,” he said. “We are pushing for political parties to be funded by the state and, if they are corrupt, they should be disbanded.”

Ramchand said she was met with broad scepticism that her campaign strategy could work.

She admits that she has had to cancel many events.

A poll of voters in three Jakarta constituencies by the Charta Politika agency in January found support for cash and other gratuities at 58.2 percent, 47 percent and 42.6 per cent.

Edward Aspinall, a professor at Australian National University who has researched money politics across Southeast Asia, said the practice of cash handouts is deeply entrenched in Indonesia.

“It’s more common in Indonesia than elsewhere in Southeast Asia,” he told Reuters.

He blamed the deterioration on the introduction of the “open list” electoral system in 2009 where voters choose candidates, rather than a party, and it is the candidates who bear most of the costs of the campaigns.

“The incentive is for individual candidates to maximize their personal vote,” he said. “Very often they do this with money. How else can you differentiate yourself from rivals from the same party when you have the same policies?”

Cash-for-votes reaches its peak during the “dawn attack”, the morning of the election when candidates blitz voters.

“It’s high drama at the last minute,” said Aspinall. “Candidates see this is really inefficient and ineffective but they feel if they don’t do it, they won’t stand a chance.”

Ramchand, for her part, says: “I’ll be sleeping in.”

(This story was refiled to fix typo in second-last paragraph)