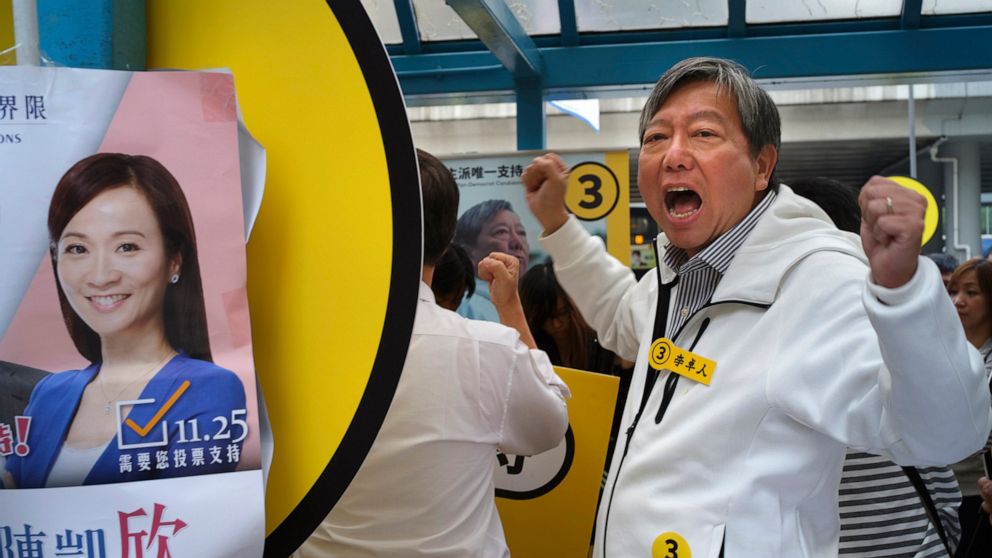 The months of demonstrations calling for reforms in semi-autonomous Hong Kong crippled its economy and put its leaders and police force under unprecedented pressure.

Lai was picked up from his home by police officers early Friday, while former pro-democracy legislator Yeung Sum and former legislator and vice-chairman of the Labour Party, Lee Cheuk-yan, were also arrested.

“Well, the Hong Kong situation is getting tense here, but we have to go on, we have to go on,” Lai told reporters after speaking with officers. The three departed the police station after being charged and are due to appear in court on May 5.

Senior police officer Wong Tung-kwong said all three have been charged with illegal assembly in connection with the Aug. 31 march, which was timed to mark the fifth anniversary of a decision by China against fully democratic elections in Hong Kong.

Organizers called off the march after police banned it, but hundreds of thousands of people defied the order and filled the streets in several areas of the Asian financial hub. Protesters threw gasoline bombs at government headquarters and set fires in the streets, while police stormed a subway car and hit passengers with batons and pepper spray in some of the most violent scenes up to that point in the protest movement.

Hong Kong broadcaster TVB showed police on the platform of Prince Edward subway station swinging batons at passengers who backed into one end of a train car behind umbrellas. The video also showed pepper spray being shot through an open door at a group seated on the floor while one man holds up his hands.

Police arrested thousands during the protest movement that began in June but fizzled out toward the end of the year amid harsher tactics by authorities. Still prison sentences have been threatened against many on charges including rioting and possessing offensive weapons.

The demonstrations began to oppose proposed legislation which would have allowed Hong Kong residents to be sent to mainland China to stand trial, but later included demands for democratic elections and an investigation into police use of force. Many fear Beijing is steadily eroding the legal guarantees and freedoms Hong Kong was promised after it was handed over from British to Chinese rule in 1997.

Lai is a serial entrepreneur and longtime activist who sold his clothing chain under political pressure and has since focused on media in Hong Kong and Taiwan.