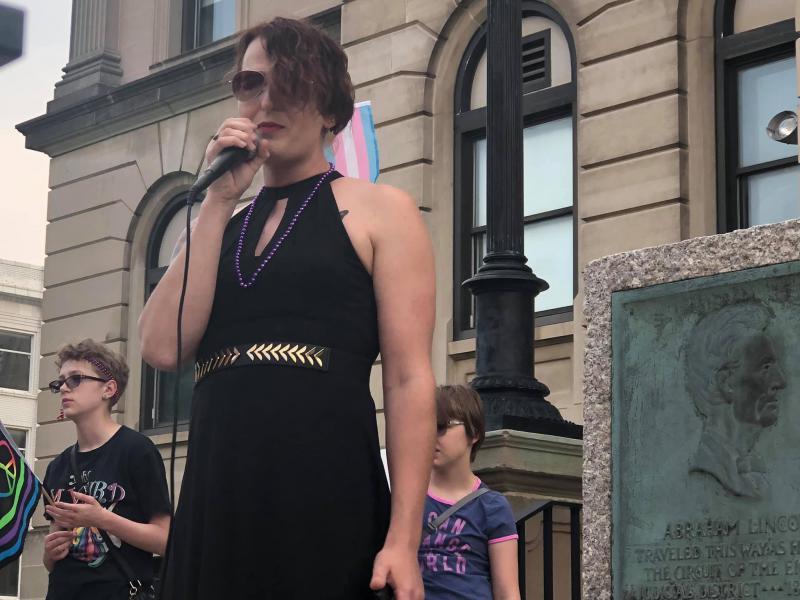 Transgender and non-dominant gender people have had a difficult time finding community and support in Bloomington-Normal, according to Brittany Clinard of Trans Ascension, formerly B-N Trans.

The support group is having their second Queerformative event of the year at Nightshop in Bloomington on Saturday.

Clinard characterized Queerformative as an LGBTQIA+ Pride event focused on providing education and resources to the LGBT community and its allies.

“That means bringing people together, allowing them to hear stories and teachings from people in the community and hopefully giving them an opportunity to connect with that,” said Clinard. “Also, to find the words to help describe how they feel and also find a sense of community and belonging, and know they are not alone in how they feel.”

The daylong event begins at noon with a “pay what you can” lunch buffet and music from The Dew Drops and Hot Sauce Universe. Afternoon classes beginning at 2 p.m. will will include info on HIV risks and stigma, PrEP (Pre-exposure prophylaxis) and the LGBTQIA+ community. Clinard is especially excited about the Complete Health Panel organized by Planned Parenthood.

“They are working with providers from different hospitals, within Planned Parenthood or different counseling services, to come together and put on a two-hour educational discussion about everything LGBT health,” said Clinard.

“And doing it in a discussion-based setting instead of just talking to you,” said Clinard of the audience-participation nature of the panel.

There will also be conversations around PrEP and HIV, and Central Illinois Friends will provide rapid testing.

“So, you’ll be able to do an STI Wellness test between 3 p.m. and 9 p.m. and get your results immediately.

Clinard has brought the second Queerformative to Nightshop because she feels it’s something missing in the Bloomington-Normal community, while noting Pride in and of itself is very important.

“But what I wanted was something that focused on educating the community. When I said, ‘Providing knowledge and connecting people with resources,’ I want people to know what’s out there and bring it right to them to give them the opportunity to meet with central Illinois friends, the health department and Planned Parenthood and see what they are doing right now. And ‘now I’ll feel comfortable going out to seek their help,” said Clinard.

She said there is so much one needs to know before coming out as transgender, with the most important being knowing where to get care.

“So, knowing you can go somewhere like Planned Parenthood for your hormone replacement therapy, or knowing what councilors in town specialize in trans clients,” said Clinard, who said she has peers who have faced resistance to their needs from local health care providers.

“It’s horrible to their mental health,” said Clinard. “That breaks a huge trust you place in the medical team to take care of you and help you live because you are literally fighting for your life when you transition.”

She said having an event such as Queerformative is extremely important in helping people with their transition.

“I didn’t know where to turn to at all,” said Clinard, who hails from the LaSalle-Peru area. “I looked throughout Peoria, Springfield, Champaign-Urbana, and there really wasn’t much for me to turn to. There wasn’t a lot of recorded information … I mean there were Pride events, but there wasn’t this opportunity … this blatant in-your-face ‘come get educated on what you need to know.’”

Queerformative: Fall Edition runs from noon through midnight Saturday at Nightshop in Bloomington.

WGLT depends on financial support from users to bring you stories and interviews like this one. As someone who values experienced, knowledgeable, and award-winning journalists covering meaningful stories in Central Illinois, please consider making a contribution.