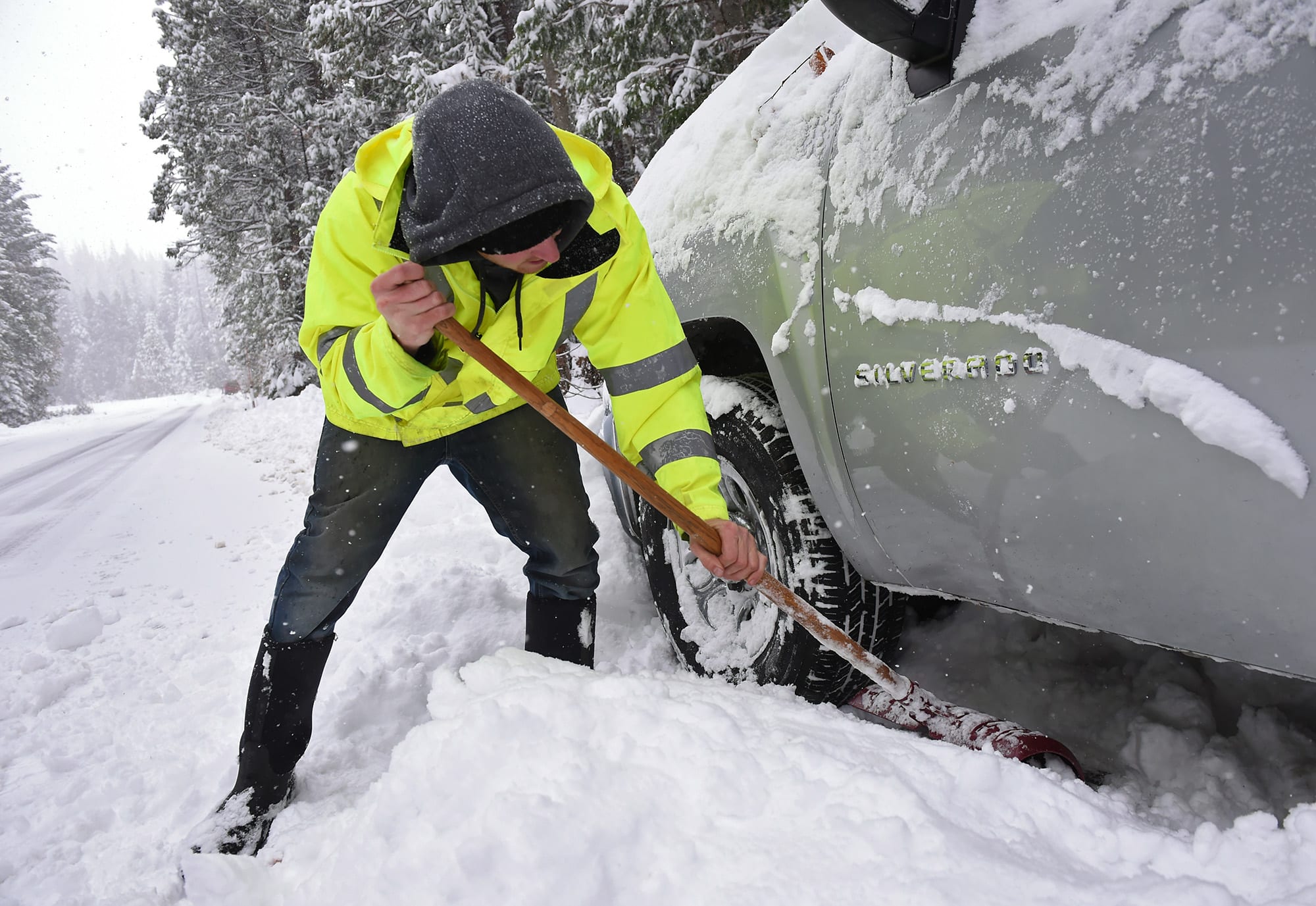 A powerful storm making its way east from California is causing major disruptions during the year’s busiest travel weekend, as forecasters warned that intensifying snow and ice could thwart millions of people across the country hoping to get home after Thanksgiving.

The storm caused the death of at least one person in South Dakota and shut down highways in the western U.S., stranding drivers in California and prompting authorities in Arizona to plead with travelers to wait out the weather before attempting to travel.

The storm was tracking into the Plains Friday and expected to track east through the weekend — into the Midwest by Saturday and the Northeast on Sunday — pummeling a huge portion of the country with snow, ice or flash flooding.

The National Weather Service said travel could become impossible in some places.

The weather could be particularly disruptive on Sunday, when millions of holiday travelers head home. Airlines for America, the airline industry’s trade group, expects 3.1 million passengers during what could be the busiest day ever recorded for American air travel.

The weather service issued storm warnings Friday for a swath of the country stretching from Montana to Nebraska to Wisconsin, with heavy snow anticipated in parts of Utah, Colorado, Montana, and Wyoming.

One hopeful traveler asked the weather service Friday on Twitter whether it would be advisable to drive to Duluth, Minnesota, over the weekend. The agency warned: “If you are in Duluth by tonight, you will likely be stuck there until at least Sunday afternoon due to heavy snow and blizzard conditions.”

Northern Michigan University reopened its residence halls, two days earlier than normal for a Thanksgiving weekend, to give students more options as forecasters predicted a foot or more of snow.

“We want to make people aware of what they could be driving into,” campus police Chief Mike Bath said.

The airline industry group estimated a record 31.6 million people will travel over a 12-day holiday period. Airlines on Friday said they were so far operating as usual as they monitored the weather.

Delta said inclement weather could disrupt travel at airports in the upper Midwest on Saturday and the Northeast on Sunday and Monday. It offered to let customers reschedule or cancel flights. American Airlines issued similar waivers for Rapid City, South Dakota.

Sections of South Dakota were under a blizzard warning and could see howling winds and as much as 2 feet (0.6 meters) of snow. Authorities reported a fatal crash in the state after a driver lost control of his pickup on an ice-covered road. A 37-year-old passenger died after the truck slid into a ditch and rolled.

The South Dakota Highway Patrol posted a photo on Facebook of another crash — a semi-truck that veered from Interstate 90 near Rapid City. “Do not travel if you don’t have to!” the agency wrote. Transportation officials said later Friday that much of I-90 throughout the state would shut down at midnight. Interstate 90 was also closed on the Montana and Wyoming border and roads throughout Wyoming were also shut down. Widespread freezing drizzle was causing icy roads across much of western and central North Dakota, the National Weather Service said.

The National Weather Service announced on Friday evening that three tornados had hit parts of the Phoenix area early Friday. Bianca Hernandez, a meteorologist, said tornado warnings are highly unusual for Arizona any time of the year.

Karlee Wilkinson, a 22-year-old college student in Long Beach, California, missed a Thanksgiving weekend gathering entirely because of snow on the way to her destination.

She, her girlfriend and her roommate left Thursday for what was supposed to be a two-hour drive. But the snow started falling in flakes bigger than she’d ever seen, the highway became gridlocked, and their car kept overheating.

At first it seemed like an adventure: They made snowmen in the highway median. But when the sun set, the temperature dropped, and they decided to turn around and head home. Their Thanksgiving dinner was chicken nuggets from a fast food drive-thru.