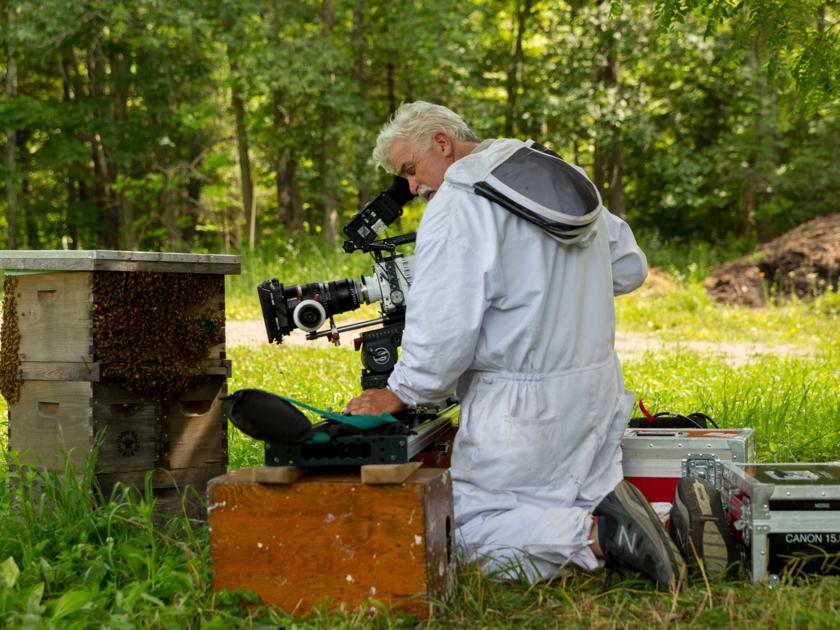 Each year, honeybees in the tens of billions take road trips across the continent to help pollinate food crops around the U.S.

Carried by truck, held over in warehouses between stops, the bees’ unusual annual migration is an essential ingredient in our food supply. They will pollinate thousands of farmers’ fruit, nut and vegetable crops.

A documentary feature film being screened at the Frozen River Film Festival, “The Pollinators” follows that migration. The film, directed by Peter Nelson and produced by Sally Roy, Nelson and Michael Reuter, sent producers and cinematographers to 14 states to gather 200 hours of footage as hives are hauled from site to site.

The documentary has already flown away with more than half a dozen major film festival awards.

The film features beekeepers, farmers and chefs, as well as environmental experts, explaining the important roles bees play in our ecosystem and food supply. Viewers get to see bees’ roles firsthand. They also get an up-close look at the risks bees face and the consequences the environment faces if measures aren’t taken to help the essential pollinators.

“I witnessed the poisoning of hundreds of beehives by careless pesticide applications, saw wild lands essential to a robust bee population repurposed for corn and soy monoculture farming, and witnessed how a changing climate can affect the delivery of bees into orchards and fields,” Nelson said.

That honeybee numbers suffered a sharp decline is old news. Colony collapse disorder decimated bee populations in the 2000s, and the number of bee hives is down by the millions.

However, the film explores a bigger picture than the catch-all CCD explanation and looks at a larger trend of pollinator and insect decline worldwide.

Biological Review published a global scientific review that found a 40% decline in insect population, at a rate of 2.5% a year. A 2017 paper published in the Public Library of Science journal found a 75% drop in the flying insect population in Germany over 27 years.

“The Pollinators” not only explores what pollinators do and the peril they face, but also explores options people have to help pollinators continue to play their essential role in the ecosystem and our food supply.

The film will be screened at 3 p.m. Saturday, Feb. 8 at the Harriet Johnson Auditorium, Somsen Hall on the Winona State University campus.