Political waters churn amid talk of Curtatone run for governor 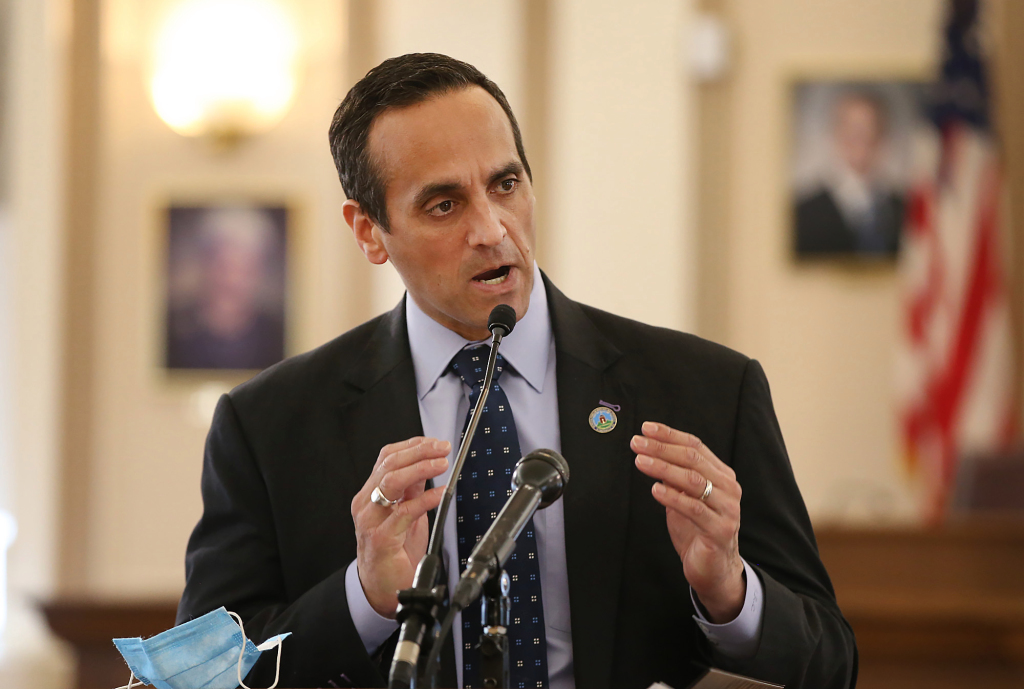 Political waters churn amid talk of Curtatone run for governor

Joe Curtatone is out there.

Right now, the longtime mayor of Somerville is the leading candidate for the Democrat nomination for governor in 2022 — and he has not even announced.

Nor has he put together a fundraising operation or begun organizing for a statewide campaign.

Still, a Boston Herald story last week on Curtatone’s increasing criticism of Republican Gov. Charlie Baker’s handling of the coronavirus pandemic caught the attention of a lot of people.

One reason why the story by Joe Battenfeld went rushing through the political system is that Baker, a RINO, is popular among Democrats both at the State House and around the state. Nobody challenges him.

Democrats do not attack Baker because they consider him one of them, despite party registration, and they love working with him.

Another reason that Curtatone, 56, caught the attention of the political class is that he is the first Democrat to indicate that he is willing to take Baker on in 2022, if Baker seeks a third four-year term as governor.

Should Baker not run again — and a case could be made why he would not — Curtatone would have done much to make him the frontrunner among potential Democratic candidates.

However, Attorney General Maura Healey and even Boston Mayor Marty Walsh might have something to say about that. Democrat Healey, being the first openly gay attorney general, will be under a lot of pressure to run for governor in 2022.

Baker, meanwhile, worn out by the job, and by protesters outside his home in Swampscott, may be thinking about taking one of those million-dollar-a-year jobs that big pharma or big medicine would offer him. And who could blame him?

Baker, 64,  was president and CEO of Harvard Pilgrim Health Care before becoming governor, a job that might be looking pretty good during these  days of turmoil, uncertainty and unrest.

Mayors do not become governors in Massachusetts, though. The last one to try was Boston Mayor Kevin White 50 years ago,  and he had his head handed to him by Republican Gov. Frank Sargent.

Neither do sitting Democrat attorneys general fare much better. Healey’s predecessor, Martha Coakley, was defeated for governor by Baker in 2014.

And the gubernatorial candidacies of then-Democrat attorneys general Scott Harshbarger and Tom Riley also went down in flames. Even Frank Bellotti, a former attorney general at the time, was defeated in the 1990 Democrat gubernatorial primary.

All those unsuccessful gubernatorial candidates were, one way or another, traditional  Massachusetts Democratic liberals, the way former Gov. Michael Dukakis, elected governor three times, was. Unlike the others, though, Dukakis initially ran not as a mayor or an attorney general, but as a former legislator.

That aside, the Democrat Party has swung so far to the left that it is doubtful that any of them could even be elected to anything today.

Compared to them and the traditional liberal Democratic Party standards that they represented, Curtatone is a far-out leftist radical.

Curtatone has more in common with progressive U.S. Rep. Ayanna Pressley than he does with former Rep. Mike Capuano, the man she beat, and the man who mentored Curtatone in Somerville. Curtatone followed Capuano as mayor.

Curtatone is a staunch progressive who made Somerville a sanctuary city long before it became a popular Democrat talking point, He brags about turning the one-time working class city into the most progressive city in the state. He not only wants the MBTA to  be efficient, but he wants it to be free as well.

Curtatone was expected to succeed Capuano in Congress, when Capuano was hopefully elected governor or to the Senate, neither of which happened. Instead, Capuano was unseated by Pressley.

Now it appears that it is Curtatone’s time to run.

After all, how long can you be mayor of Somerville? Curtatone was elected in 2004 at age 37 and has been mayor ever since. Before that he was an alderman for eight years.

Meanwhile, Curtatone has gone after Baker on the coronavirus pandemic the way Joe Biden went after President Donald Trump. It worked for Biden.

He did it again on Sunday during an interview with Jon Keller on WBZ-TV. “We can’t depend on a government that has failed us,” he said.

One way to fix it is to become governor.