Wilson was only 28 years old when she costarred with Domingo during the Washington Opera’s 1999-2000 season production of “Le Cid,” and found herself in a dressing room where she says he grabbed her breast, she revealed to the Associated Press.

“It hurt,” she shared with the AP. “It was not gentle. He groped me hard.” She said Domingo then turned and walked away, leaving her stunned and humiliated. 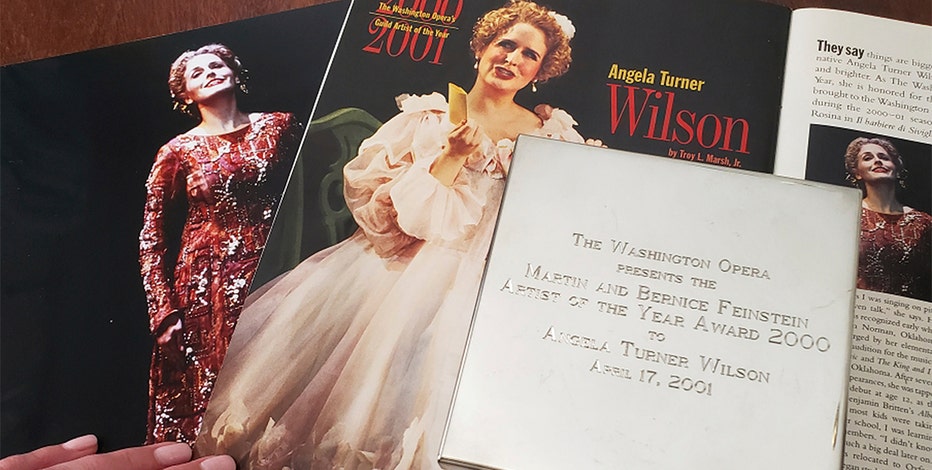 In this Tuesday, Sept. 2, 2019 photo provided by opera singer Angela Turner Wilson, she displays her 2000 Artist of the Year award from the Washington Opera next to a photo of herself from a 1999 performance of “Le Cid,” left, and a magazine article

The LA Opera says it takes new allegations of sexual harassment against Placido Domingo “extremely seriously” but cannot discuss any specific claims because of its ongoing investigation into the star, who serves as the company’s general director.

What Wilson thought “was the start of big things” for her career, quickly turned into a nightmare.

Wilson was inspired to reach out to the AP now, along with 11 other women, with her story because of a similar story published by them about Domingo on August 13. The initial story described how numerous women shared their “Me Too” moments with the Spanish singer involving sexual harassment and inappropriate behavior. The accusers also described quid pro quo actions by Domingo which left victims feeling as though the veteran singer would damage their careers if they rejected his unsolicited advances.

Domingo’s spokeswoman has come out hard against all the allegations, “The ongoing campaign by the AP to denigrate Placido Domingo is not only inaccurate but unethical,” Nancy Seltzer shares with the AP. “These new claims are riddled with inconsistencies and, as with the first story, in many ways, simply incorrect. Due to an ongoing investigation, we will not comment on specifics, but we strongly dispute the misleading picture that the AP is attempting to paint of Mr. Domingo.”

Domingo has been removed from his post with the LA Opera while the company investigates the accusations. An email obtained by the AP sent Thursday to LA Opera employees explains that administrators, who hired outside counsel to investigate after the initial accusations, “are very troubled by the ongoing allegations raised by the Associated Press, and take them very seriously.”

Wilson explains how she never welcomed any of the advances, “What woman would ever want him to grab their breast? And it hurt,” she said. “Then I had to go on stage and act like I was in love with him.”

Wilson was the only new accuser to speak to the AP on the record. The others requested anonymity because they still work in the industry and said they feared recriminations in a world long dominated by Domingo and other powerful men.