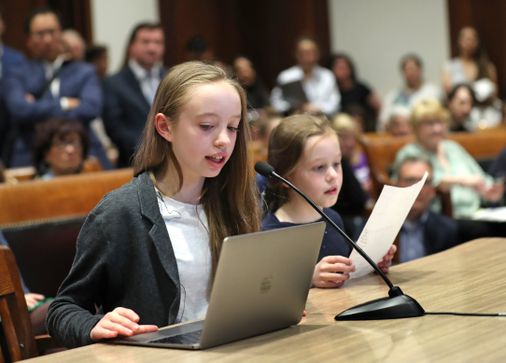 Dr. Michael Pistiner, a pediatrician and director of advocacy and education at Mass. General’s Food Allergy Center, said legislation is needed to “help our state patch up vulnerabilities and keep unacceptable disasters from occurring.”

Speaking at a packed hearing, he said several other leading physician groups that collectively care for thousands of students with food allergies, including colleagues at Children’s Hospital Boston and the Massachusetts chapter of the American Academy of Pediatrics, supported tightening school food allergy laws.

Legislation sponsored by Senator Cynthia Stone Creem, a Newton Democrat, would require public and private schools to create a comprehensive plan that trains staffers, including custodians, bus drivers, athletic coaches, and teachers to recognize the symptoms of a severe allergic reaction. It would also require schools to develop policies for treating allergic reactions when school nurses are not available.

Many schools have school allergy plans, Creem said but “many schools do not, and children are at a huge risk.”

Massachusetts is one of only two states — the other is Hawaii — that prohibits anyone other than a school nurse to administer epinephrine to a person experiencing a first time reaction, Pistiner said.

Some schools don’t have a nurse, or the nurse covers several buildings at once, leaving students vulnerable in an emergency.

Creem’s bill would address that gap by allowing nurses to train other staff members to administer epinephrine in these cases. It would also grant immunity from lawsuits to any authorized employee, and to the school stemming from rendering such treatment.

And the legislation would require schools to maintain a stock supply of generic epinephrine that would be available to all students, stored in an “easily accessible unlocked location,” with the inventory regularly checked for expiration and replacement.

While the bill does not include an estimate of the potential cost to schools, Creem and the doctors who testified said the expense should be minimal because of grants and other programs that typically supply epinephrine to schools for free or significantly reduced prices.

Creem’s bill would require schools to annually report data about food allergies to the state health department, including the number of students with allergies, broken down by type of allergy and the number and nature of allergic incidents.

Pistiner pointed to a troubling statistic: Nearly one-quarter of the reported emergency treatments in Massachusetts public schools for severe allergic reactions in 2017 involved students or teachers who didn’t realize they had an allergy before that serious incident.

Maja Currier said she discovered that the school her daughters attend, Kingsley Montessori in Boston, didn’t have a school nurse or stock epinephrine until Currier pushed for both two years ago.

Her 12-year-old daughter, Lorelei Currier, told legislators she always carries an EpiPen — an auto-injector filled with epinephrine — for her peanut allergy, but she worried about other students who might not. She urged the panel of lawmakers to pass the bill “to make children feel safer” at school.

Olsen, the Mass. General radiologist, told lawmakers just how scary it is to be a parent of a student with such allergies — even for a doctor who is trained to handle emergencies.

“Despite having 15 years of medical training and practice before Zeke was born, I was not prepared for the diagnosis of food allergies,” Olsen said.

She described learning strategies to prevent exposure to allergens, and to understand the signs of a severe reaction. Because her son is allergic to sesame, peanuts, tree nuts, and eggs, she has become compulsive while shopping, talking to herself in the cookie aisle, she said, and dialing up food companies if their product doesn’t have an allergy statement on the packaging.

“Proper training will result in creating a safer environment for our kids,” Olsen told lawmakers. “Please, let’s not let a tragedy make us wish we had made this a law.”