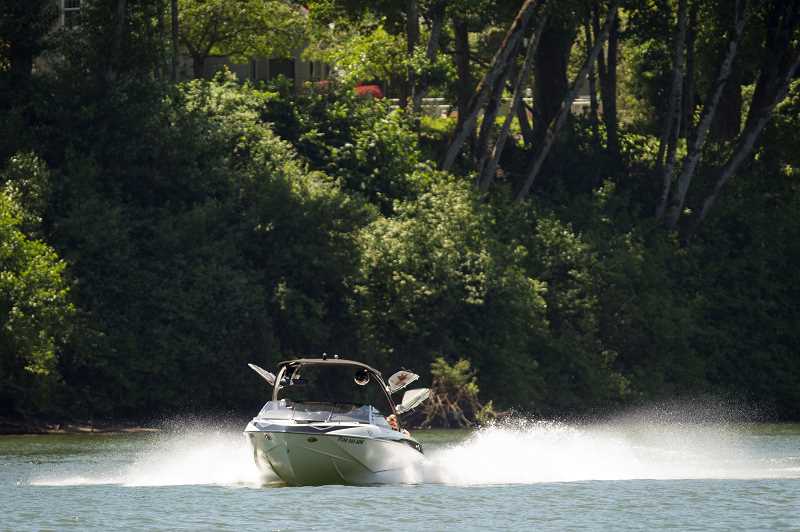 After the meeting, the Oregon State Marine Board changes rules that would make program less costly for some

Proposed rules that will establish a towed water sports education program in the Willamette River near Wilsonville were not exactly well received at a recent public hearing. However, since the meeting, the Oregon State Marine Board staff may have neutralized some of the concerns — updating rule language so that fewer recreationists will have to obtain the certificate.

According to the proposed language, the Marine Board would require people engaging in wakeboarding or wakesurfing activities to obtain a boater safety education certificate by taking a boater safety class and passing an exam (or just passing the exam) in river miles 30 to 50 of the Willamette River, which is roughly from West Linn to Newberg and includes Wilsonville.

The Marine Board’s proposed rule language is based on the direction of the Oregon State Legislature, which passed a bill ( House Bill 2352) directing the Board to establish the boater safety program. Homeowners on this portion of the river have long claimed wake activities have damaged their docks and eroded shorelines and the bill was in part a response to those concerns.

“We have a really unique geographic feature here in the Newberg Pool, and that is a narrow and deep part of the river that has become a popular place to boat and play. Boats that create so much energy are eroding banks and deteriorating steep high cliffs,” said bill proponent and State Rep. Courtney Neron at a recent town hall.

The rule language stipulates that those who have obtained the boater safety certificate must also place a decal on their boat showing that they are adhering to the rules. The biennial fee for the decals and certificate would be $60 and $15 for each additional boat per owner. However, the language states that the outside entity providing the course can charge as much as $80. The course would be available both online and in person.

Prior to the hearing, which took place Thursday Sept. 19 at the Wilsonville Public Library, the Marine Board stipulated that all people engaging in wakeboarding or wakesurfing activities must obtain the certificate, including not just the person towing or propelling the wakeboarder or surfer but also the person riding the wakeboard or surfboard and the lookout.

And one of the most common gripes levied at the meeting was the cost of obtaining certificates, which would have compounded for families who will need to purchase a certificate for each family member. It also would have prevented people from bringing their friends who don’t have a certificate.

“If everyone is participating in the activity has to have this and the fee is ($60), for a family of four, that’s cost prohibitive. You’re pricing people off the river,” Wilsonville resident Ken Rice said at the meeting. “It’s my opinion that this is an attempt to privatize the river. The homeowners want to have the river to themselves and this is one step closer to that.”

However, in response to feedback, the Marine Board staff took a closer look at the rules and decided upon a new interpretation of the legislation. According to Josh Mulhollem, the policy and environmental program manager for the Marine Board, the staff found that the definition of wakeboarding or wakesurfing only applies to the person towing a wakeboarder or propelling a wakesurfer. In turn, they decided to change the rules to stipulate that only the person towing or propelling must receive the certificate.

“We have public hearings to have public input on how we are doing our jobs. It (the hearing) caused us to come back and make sure we are reading it correctly,” Mulhollem said. “It (the rule change) wasn’t in response to comments but may not have occurred if the public didn’t come out and say ‘Maybe this is incorrect.'”

“He added: I’m happy we made this realization because we certainly don’t want to penalize people for participating. The goal of this bill wasn’t a punishment.”

Another wrinkle of the bill that some who provided testimony complained about was the 10,000-pound limit (boat weight plus ballast capacity) for boats that can receive the certificate and in turn perform these wake-producing activities in the Newberg Pool.

Mulhollem said at the meeting that the 10,000 pound number is based on the 12,000 pound capacity of the boat ramp at the Boones Ferry Marina, located at the midpoint of the Newberg Pool.

Greg Leo, who has represented the Willamette River Safety Preservation Alliance and lives in the Butteville area, a group that has influenced rulemaking in the Newberg Pool, testified objecting to the rules.

“In talking to citizens about these rules we find that this 10,000-pound number is kind of a dart throw,” Leo said. “To use the standard the ramps can accommodate seems kind of arbitrary. For the purposes of this bill, which is about promoting safety and being ecologically appropriate to the river, we would want to reduce the (maximum) weight of those boats to around 3,500 (pounds).”

Leo identified that number (3,500) based on the standard used at Oswego Lake and asked the Marine Board to provide more evidence as to why 10,000 is the right number.

Ken Verboort, who owns a home along the Willamette River, also didn’t think the 10,000-pound rule was stringent enough and posited that it wouldn’t prevent wakeboarders and wakesurfers from damaging docks.

Mulhollem said the purpose of the bill was not to limit wakeboarding or wakesurfing but to provide education and he said they chose the boat ramp barometer based on the available information they had. The legislation mandated that the Marine Board decide upon the loading weight.

“The fact that the loading weight part was in there but wasn’t defined in the bill is interesting, “Mulhollem said. “We are required to set that loading weight and we use information we have and 10,000 is our first shot.”

Another concern, previously stated by Marine Board Boating Safety Program Manager Randy Henry, is that the new rules, when coupled with rules establishing zones for wakeboarders and wakesurfers that went into effect in February, could make rule adherence cumbersome.

“Are they (the zones) necessary? Can they work with the new education requirement? I don’t know,” Henry told the Spokesman in August.

The period when the Marine Board will accept testimony for the proposed rules ends Oct. 7 and the Marine Board likely will initiate rulemaking on the matter at the Oct. 23 meeting, according to ?Mulhollem. The board also will review the current zoning rules then.

Quality local journalism takes time and money, which comes, in part, from paying readers. If you enjoy articles like this one, please consider supporting us.
(It costs just a few cents a day.)