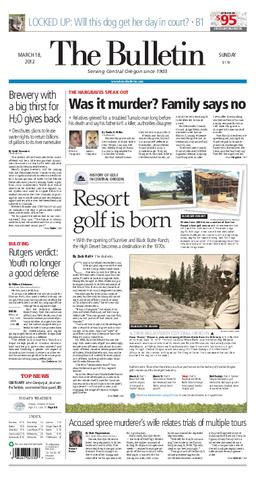 “Between Two Knees” is an uproariously funny and irreverent comedy that cranks the jokes out at a fast and furious pace and had me in stitches throughout.

Now, when one thinks of hilarious comedic subjects, the atrocities that have taken place to Native Americans likely does not come to mind. The creative minds from the sketch comedy troupe the 1491s proves that one can make this subject funny and poignant.

The 1491s, Dallas Goldtooth, Sterlin Harjo, Migizi Pensoneau, Ryan RedCorn and Bobby Wilson, have done a great job in writing their first play. They find laughs in tragic subject matters and use comedy as a means of having audiences aware of history they may otherwise not have known about, and make social commentary using humor as a way to tell their tale. Director Eric Ting does a solid job of making a laugh out loud comedy that will make people reflect on what just took place on stage as they leave the theatre.

Sure, it may not appeal to everyone and will make some folks uncomfortable, but for me, it is all quite effective overall. If you like movies like the Naked Gun film series, or sketch television shows like “Saturday Night Live” this play may be for you.
“Between Two Knees” is not perfect and is a bit scattershot overall, with the first half more consistent compared to the second half. But, what works here works really well and the play truly has some of the funniest scenes I have witnessed in a theatre.

Writing about this production is a bit hard since this is a play one must experience instead of me telling in great detail all of the really funny parts.
Unfortunately, no one can be told what “Between Two Knees” is, you have to see it for yourself. But, I will give it a shot.

After a funny and out there opening that sets the tone for the entire production that beautifully skewers Native American cliches over the years, we are at Wounded Knee in 1890. This is of course where 250-300 Native Americans, including women and children, were massacred by U.S. soldiers. “Between Two Knees” follows a baby that is rescued from the massacre and what happens to him and his family up to the Wounded Knee Occupation of 1973.

We meet the baby again, now a young man named Isaiah (Derek Garza) when he at an horrific Indian boarding school. There, he meets the love of his life, Irma (Shyla Lefner), who is tough and resourceful, as both find a way to escape the school, as we follow their adventures in the first half. We meet the couple again later in life, and are now played by April Ortiz and Wotko Long, who also inhabit numerous other roles in the play quite effectively. While certainly a comedy, there are poignant scenes between Isaiah and Irma and their family throughout. In the second half of “Between Two Knees,” Lefner and Garza play two new characters. Lefner is a doctor named Irene, while Garza is Eddie, the grandson of Isaiah and Irma. These two characters relationship is a complex one and is done quite well as Irene comes to terms with something she did years ago which involves Eddie.

The jokes come flying at a fast pace throughout. This worked for me because if there is one joke that may not tickle your funny bone, or make you go “man, that is just wrong, I can’t laugh at that,” another joke will be coming shortly that you will probably like. “Between Two Knees” is full of pop culture moments, which I love. There is a part where Irma mimics a sequence that Chun Li from the Street Fighter video games does to perfection. Irma does this after defeating an evil priest and his nun ninja assassins, which are called nunjas here. I just roared with laughter when I saw this. I will say that I’m not sure how many folks will get the joke. My wife, after all, gave me a very blank look as I laughed, looking like “did I miss something?”

Justin Gauthier plays Larry, the narrator of the play. He has a wonderful way of being very funny and matter of fact as he tells a bunch or really loaded jokes. The Wheel of Indian Massacres scene, where Larry asks the audience questions about massacres of Native Americans throughout the years, and is presented as a game show, is quite funny. This perfectly displays how “Between Two Knees” uses humor as a way to shed light on horrific events.

Lefner and Garza are terrific in their roles. They do a fantastic job handling the comedic and dramatic moments and add real heart and soul to this work. I also give them huge credit for keeping a straight face in a sequence where Irma and Isaiah are having a romantic moment on a beach, as other cast members dump water and salt on them. Shaun Taylor-Corbett displays top notch comedic chops in numerous parts. In a sequence early in the play he is an Native American pretending to be white. Taylor-Corbett perfectly plays the absurdity of it all and is quite funny here.

Huge props must be given to the utterly fearless and straight up hilarious duo of Rachel Crowl and James Ryen. In the play program, both are listed as ensemble, which does not do justice to their roles in “Between Two Knees.” Both play around 17 to 18 parts in the production and display how adapt they are at this crazy, freewheeling type of comedy. They both garner some of the biggest laughs in this production. Crowl shows an innate ability to play a wide range of characters to perfection. This includes the evil priest at the boarding school that she brings to life with creepy relish. Other characters Crowl inhabits include a U.S soldier at Wounded Knee and a television reporter live from Wounded Knee in 1973. My favorite character she plays is hands down a way out there new age guru who officiates the wedding of Irma and Isaiah. This character is totally clueless about Native Americans and their culture and likes to use the Hawaiian word mahalo a lot. Crowl garners well earned laughs in this sequence. It ’s like if Jeff Spicoli from “Fast Times at Ridgemont High” and comedian Pauly Shore had a love child together.

Ryen is gut busting funny here, from a mother superior that acts like Igor, George Washington, to an explosion. An explosion you may ask. How the heck does he play an explosion? Well, you have to watch the play to find out. All I can say I never seen an explosion like that before.

The ending of “Between Two Knee” is quite clever and may make some people in the audience go ”wow, they really just went there.” I was just shaking my head in laughter at the wonderful absurdity and satire displayed. All I will say is great progress in humankind is made. But how this breakthrough is reached is quite surreal.

“Between Two Knees” is a world premiere and opened on April 7 and runs through Oct. 27 at the Thomas Theatre at the Oregon Shakespeare Festival in Ashland, Ore., and is co-commissioned with New Native Theatre.

To order tickets and for more information on “Between Two Knees,” go to www.osfashland.org/en/productions/2019-plays/between-two-knees.aspx